Half of You Isn’t Human

That is, half your cells aren’t human. Instead, they belong to the menagerie of microbes that call your body home. 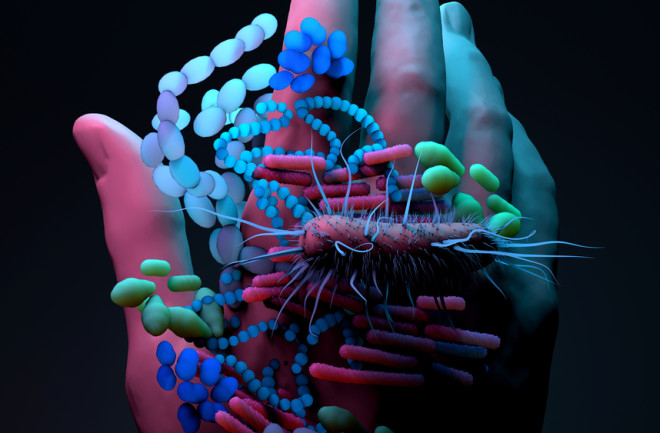 It’s often said that the bacteria in our bodies outnumber us 10 to one. Better calculations in recent years have reined in that conclusion, but today’s estimates are hardly less astounding: the real ratio seems to be about one to one. Fifty percent of the cells that make up the entity you call “you” are, in fact, microbial.

Granted, they are minuscule compared with human eukaryotic cells. They total perhaps a pound, meaning we can still claim the bulk of our weight. And these shifting guesses don’t really have implications for our wellbeing or, well, anything at all. “It’s more a catchy thing,” says Ruth Ley, director of microbiome science at the Max Planck Institute for Developmental Biology.

But they do highlight the remarkable fact that, in one sense, fully half of what we believe to be “ourselves” does not take the form we typically imagine. It’s a collection of microscopic organisms with their own DNA — many millions of genes, to our 20,000 — capable of maintaining or disrupting our health. “Typically they take care of themselves,” and us, Ley says, but only “if you’re leading a reasonable lifestyle.”

The oft-quoted estimate, that for every human cell there exist 10 bacterial cells, comes from a 1972 paper by T. D. Luckey at the University of Missouri. Such appraisals, by the way, describe the “Reference Man,” a hypothetical, 155-pound, 5'6 guy between the ages of 20 and 30. Luckey concludes that the “cells in his body are a distinct numerical minority of the total being that we call man.”

A team of Israeli and Canadian researchers, who proposed the “half and half” mixture, call the original guess “an old back-of-the-envelope calculation.” Yet, they write, this reduction in quantity “does not take away from the biological importance of the microbiota.”

Our bodies are teeming with colonists of various kinds, and they latch onto various places — viruses, fungi, archaea, on our skin, in our mouths and internal organs. But the vast majority are bacteria, and the bulk of them reside in the gut, or gastrointestinal tract (which means that each defecation probably flips the ratio in our favor).

These tiny hitchhikers come from everywhere. We generally aren’t born with them, but gather them from our environment, starting at the moment of birth. “We pick up our microbes, especially when we’re really young, from everyone around us,” Ley says. In adolescence they guide our development, and throughout life they help our daily bodily processes to run smoothly, from regulating the immune system to supplementing our nutrition and guarding against dangerous diseases.

In a healthy person, all the microbes coexist in harmony. But for a long time, Ley notes, we’ve warred against the bad and the good indiscriminately —  with antibiotics, processed foods and even improvements to basic hygiene.

“We’ve done so much in the past century to knock back pathogens, and that’s tremendous,” she says. Yet she and other experts fear that after generations of assault, we may have done severe harm to our microscopic benefactors as well. “Collateral damage,” Ley calls it. Now some researchers attribute the rise in allergic and autoimmune disease to the dearth of microbes to which the average person is exposed.

We have evolved alongside the “bugs” that reside within us, and it’s clear we rely on them enormously to function properly. “The more we know about the human ones and compare them across species, the more we realize just how adapted they are to us,” Ley says. “Our microbiomes are distinct from those of other non-human primates and other animals. These are things we’ve carried with us through time.”

Given our long shared history with these specialized organisms, it’s no wonder they are vital players in our overall health, and we theirs. The general recipe for a sound microbiome is, unsurprisingly, the recipe for a sound everything else: a healthy, diverse diet and ample exercise. Given what we know of their importance, Ley argues we ought not neglect our invisible half. “You can’t just go and grab more microbes somewhere else,” she says. “We do need to take care of them.”