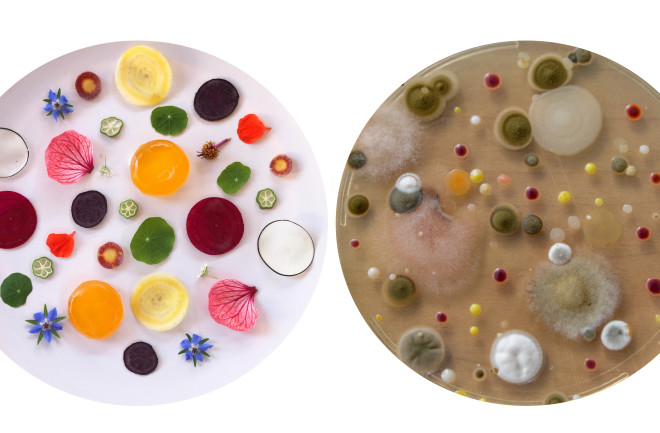 Photo Credit: Jimmy Sianipar & Anthony Martin It happens to all of us but don’t worry it’s completely natural. When food smells waft into our nostrils a host of physiological reactions occurs. We almost immediately begin to salivate (if not drool) and our stomach roars beckoning you to get a taste. These reactions are innate physiological properties of your digestive system that prepares your body for the food that it thinks you’re about to consume. The digestive system is composed of three primary organs: the small intestine, stomach, and large intestine (or colon). These digestive compartments work cooperatively with other secondary organs, including the pancreas, liver, and gallbladder, to break down larger macromolecules into nutrients that our body can use for energy. But where does it all begin? The mouth. The salivary glands in our mouth secrete saliva to initiate enzymatic digestion of our meal. Saliva also make our food more pliable so it can be broken down by chewing. An important component of your saliva is a-amylase, which breaks down large polymeric sugar molecules (starch) into shorter oligosaccharides and polysaccharides. Once our food is swallowed it passes through the esophagus down into the acidic environment of the stomach. The low pH of our stomach helps to neutralize any pathogenic, disease-causing opportunistic microbes. The muscles in the stomach contract, which helps to mix the food before delivery into the small intestine. When our food enters the small intestine it travels through three major compartments: the duodenum, jejunum, and the ileum. Within these compartments, food macromolecules are subject to further enzymatic digestion by lipases (enzymes that break down lipids/fat), amylases (further breaks down sugars/carbohydrates), and trypsin (breaks down proteins). The cells that line the inside of the small intestine, or lumen, are known as epithelial cells that have a distinct morphology relative to the epithelial cells of the large intestine. The luminal epithelial cells of the small intestine have structures known as villi that play an important role in nutrient absorption of small molecules such as monosaccharides, amino acids, fatty acids, and glycerol. The final route of our food through the digestive system is the large intestine. Most of the important nutrients from our food have already been absorbed once it enters the colon. However, there is still a portion of food that we eat that remains resistant to digestion by our own body’s enzymes. At this point, this non-digested food mass will be bombarded by our intestinal microbiota. The large intestine is a reservoir for the trillions of bacterial microbes that reside within us and are collectively known as the gut microbiome. The microbiota within the colon possess an arsenal of unique digestive enzymes that can break down our food even further. From the products of these reactions, the bacteria use nutrients that are optimal for their growth while releasing other metabolites that we can use for energy. Generally, our relationship with our microbial counterparts is symbiotic or mutually beneficial. In 2011, researchers characterized the gut microbiome found in humans into three distinct clusters also known as enterotypes. These enterotypes classify taxonomically the myriad of bacterial microbes that live inside our gut. For example, type 1 is defined by high levels of bacteria known as Bacteroides, while type 2 has low levels of Bacteroides and higher levels of Prevotella, and type 3 has elevated levels of Ruminococcus [1]. Generally, our body mass index, age, and gender cannot give us information about our enterotype, however we can use information about our gut microbiome to predict these attributes [1]. One of the major factors that can contribute to our own enterotype is our long-term diet. Therefore, the foods we eat play a significant impact on the composition of bacteria that can colonize our guts and can influence our health or disease. For example, the gut microbiota has been implicated in the onset of metabolic diseases such as obesity and type II diabetes [2]. Specifically, a decrease in the prevalence of Bacteroides and an increase in bacteria known as Firmicutes and Actinobacteria is linked to obesity [3,4]. There is intense clinical interest in understanding the gut microbiota and learning how to adopt dietary interventions that might correct the imbalance of pathogenic versus commensal bacteria. In fact, in obese subjects it was shown that a reduced caloric diet was beneficial in reconstituting the loss of Bacteroidetes while decreasing Firmicutes resulting in loss of body weight [5]. Knowledge of the human microbiome is highly relevant to today’s eating consumption habits as our diet can influence the ecology of our gut microbiota. These dietary-mediated shifts in our intestinal microbiome in turn can have either beneficial or adverse effects on our health. By taking a closer look at our microbial residents we might better understand the pathogenesis of certain inflammatory and metabolic diseases while simultaneously engineering more precise treatments in the future. References Cited