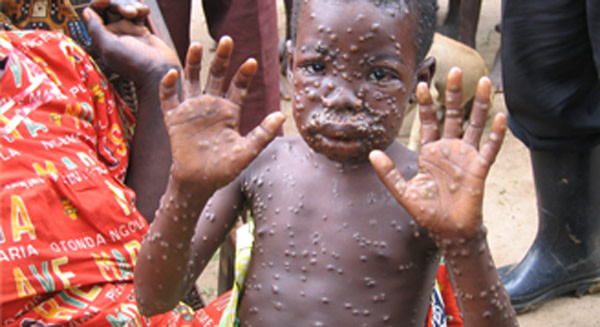 In 8 May 1980, the World Health Organisation declared that “the world and its peoples have won freedom from smallpox.” Through decades of intense vaccination, this once fatal disease had been wiped out. It was a singular victory and having won it, countries around the world discontinued the vaccination programmes. After all, why protect against a disease that no longer exists (save in a few isolated stocks)? Unfortunately, this is not a rhetorical question. The smallpox vaccine did more than protect against smallpox. It also reduced the risk of contracting a related illness called monkeypox, which produces the same combination of scabby bumps and fever. It’s milder than smallpox but it’s still a serious affliction. In Africa, where monkeypox originates from, it kills anywhere from 1-10% of those who are infected. And more and more people are becoming infected. Anne Rimoin from the University of California, Los Angeles compared data on the virus in the Democratic Republic of Congo over the last three decades. She found that, during those years, monkeypox has become 20 times more common in humans. In one particular area, 72 people out of every million were infected each year between 1981 and 1986. Between 2005 and 2007, that figure rose to 1442 per million. Rimoin thinks that we eased up the pressure on smallpox vaccination too soon. After victory was announced, the Global Commission for the Certification of Smallpox Eradication ruled that it wasn’t worth vaccinating people on the grounds of preventing monkeypox. However, it called for the disease to be closely monitored. Between 1981 and 1985, only 404 cases turned up in all of Africa, and simulations predicted that the disease was unlikely to spread too far in a human population before dying out. This was no public health threat. In 1986, even the monitoring programme was stopped. In 2005, Rimoin’s group, together with the DRC Ministry of Health and the World Health Organization, set up a new round of monkeypox surveillance and they spent two years collecting data. Their research showed that the disease is gaining ground. Rimoin found that monkeypox was disproportionately affecting children and almost all of those who fell sick were born after 1980, when the smallpox vaccination programme was halted in the DRC. The vaccine wasn’t a perfect defence against monkeypox but it was still around 85% effective. Among people who were born during the vaccination era, those who were immunised were 5 times less likely to develop monkeypox than their protected peers. And this protection is clearly long-lasting; even 25 years on, they could still ward off the related virus. These figures are probably underestimates too. The region’s inconsistent healthcare isn’t exactly conducive to accurate disease monitoring and Rimoin says that her team had word of many more cases, but couldn’t always check them out because of their remote location. Monkeypox is spread by animals including squirrels and, fairly obviously, monkeys. As humans encroach upon the DRC’s tropical rainforests, the risk of being exposed to an infected carrier grows. Indeed, Rimoin found that the odds of contracting monkeypox were higher for people living near forested areas, and for men. As civil strife continues to affect the DRC, locals are being forced to rely more on hunting to get enough food and that brings men in close contact with furry viral reservoirs. It’s an emerging threat, but Rimoin isn’t calling for smallpox vaccination to resume. Doing so would be logistically difficult in an area where even collecting data can be fraught. It might be better to take a more targeted approach, vaccinating only health workers who treat infected patients, and people who come into frequent contact with animal carriers. It may also be worth educating local people about the dangers of handling carrier species and the benefits of isolating people who show the very obvious symptoms, until they can be treated. But most importantly, Rimoin wants active surveillance in regions where the virus circulates, especially since there are still so many unknowns about the virus. We need to better understand how it moves from human to human (and from animal to human), how often it’s fatal, or what the complications are. It’s a good opportunity to take action now, at a time when the monkeypox is still confined to specific areas. Things might not stay that way. In 2003, there was a bizarre outbreak in the United States, as rodents from Ghana brought the disease to American prairie dogs, who handed it over to humans. All sorts of rodents the world over might become reservoirs for the disease and Rimoin writes, “If monkeypox were to become established in a wildlife reservoir outside Africa, the public health setback would be difficult to reverse.” Reference: http://dx.doi.org/10.1073/pnas.1005769107Image from Anne RimoinMore on diseases: