Ebola found in pigs (thankfully, it's the one harmless type)

As the world is now painfully aware, pigs can act as reservoirs for viruses that have the potential to jump into humans, triggering mass epidemics. Influenza is one such virus, but a group of Texan scientists have found another example in domestic Philippine pigs, and its one that's simultaneously more and less worrying - ebola. 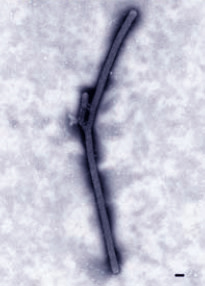 There are five species of ebolaviruses and among them, only one - the so-called Reston ebolavirus - doesn't cause disease in humans. By fortuitous coincidence, this is also the species that Roger Barrette and colleagues have found among Philippine pigs and even among a few pig farmers.

The team were called in last July by the Philippine Department of Agriculture to identify a mystery illness that was sweeping across the country's pigs, infecting their lungs and airways and causing miscarriages. Barrette's group collected tissue samples from five groups of pigs throughout the island and through a battery of tests, they gradually ruled out their list of potential candidates - foot-and-mouth disease, African swine fever, and others.

The first positive hit was an infection known as blue ear disease, or to give it its formal name - porcine reproductive and respiratory syndrome virus (PRRSV). It was already the primary suspect for the pig illness, and the Philippine strain was genetically similar to one that was sweeping through China at the time. It seemed like the mystery was solved. But not so - when Barrette incubated an infected lymph node with monkey cells that are immune to PRRSV, the cells still started dying. There was another virus.

To identify it, Barrette used a powerful tool called a "panviral microarray" - a small slide that contains the genetic signatures of tens of thousands of viruses, neatly arranged in a grid. Similar tools have already proved their worth in viral detective work - the closely related Virochip was used to identify the SARS virus in 2002. This time, the technique brought up a strong hit for Reston ebola.

Samples of the virus were sent to the CDC, who confirmed through a battery of tests that REBOV was infecting the Asian pigs. Barrette clinched the diagnosis by sequencing the genomes of viruses isolated from his samples. He even managed to take a snapshot of the virus under an electron microscope.

Ebolaviruses, and their close relatives the Marburgviruses, belong to a viral family called filoviruses, which were first discovered in 1967. In the 40 years since, outbreaks of the disease have cropped up across the world seemingly at random. The high fatality rates of most infections have prompted scientists to search for wild animals that could act as living headquarters from which the viruses could seed infections in the human populace. African fruit bats have emerged as one such reservoir for both Marburg and the particularly lethal Zaire strain of ebola. 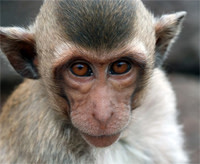 But until now, the Reston species, or REBOV, has only ever been found in monkeys. In fact, it was first identified in 1989 when a shipment of crab-eating macaques carried the virus to the US from the Philippines. No fewer than three separate outbreaks in the 1990s, in the US and Italy, were traced back to a single facility in these islands.

Nonetheless, it seems that the virus has been circulating in pigs for a while. Barrette found that the viruses form various Philippine sites are genetically further from each other than they are to the 1989 monkey strain that was the first to be discovered. And when the modern pig strains are added to a family tree of ebolaviruses, they don't clump together neatly.

This implies that the virus made its way into pigs on several occasions, rather than one strain accounting for all the modern infections. It's entirely possible that REBOV "spilled over to monkeys and swine from an as yet unidentified host". Given their affinity with ebolaviruses, fruit bats are a possible candidate.

Worryingly, there are signs that the virus may have made the jump from pigs to people. Barrette tested 141 people and found six who tested positive for antibodies against REBOV, all of whom either worked on pig farms, or with pig products. As with previous outbreaks of the virus, there are no signs of any actual disease in the infected people.

Even so, REBOV has the potential to evolve into an emerging human disease. Michael McIntosh, who also worked on the study, says, "The question is what level is that risk. The fact that it is in domestic pigs, an animal species that is intimately connected to humans, increases the risk significantly. However, there is simply no way of knowing if the virus will cause or contribute to disease in pigs or humans at this time." Given our recent experiences with both swine flu and MRSA, it pays to be careful.

McIntosh adds, "While the WHO suggests that the risk of disease caused by REBOV in healthy humans is low, it would be premature to say that it is currently harmless."An immediate concern is to work out how the virus might affect people suffering from weakened immune systems or other diseases. In pigs, it seems that REBOV only infects animals that were already suffering from blue ear disease, just as the original monkey strains were found in conjunction with another virus - simian haemorrhagic fever. Although REBOV is capable of infecting monkeys on its own, the fact that it has now been found in the company of other viruses in two different hosts is most intriguing.

Already, a surveillance programme is being put into place to monitor the virus and there's still a lot of work to do to understand how it's transmitted, what its reservoirs are and how common it is. The World Health Organization has posted a factsheet on the web regarding the emergence of Reston ebolavirus in domestic swine, which includes recommendations for pork processing and consumption in the Philippines.

Images: Macaque from Chris Huh and virus from Science/AAAS

More on ebola and other pig-transmitted viruses: