How humans started a bacterial pandemic in chickens

The prospect of infections spreading from animals to humans has become all too real with the onset of the current swine flu pandemic, and the threat of a bird flu still looming. But infections can jump the other way too. Decades before the world's media were gripped with panic over bird flu, humans transferred a disease to chickens and it has since caused a poultry pandemic right under our noses.

The infection in question is a familiar one - Staphylococcus aureus, a common human bacterium that's behind everything from mild skin infections to life-threatening MRSA. It causes chicken diseases too, including septic arthritis and 'bumblefoot'. But in the 1970s, broiler chickens began developing a new type of S.aureus infection called 'bacterial chrondronecrosis with osteomyelitis' or, more simply, BCO. It's a bone infection and it's a major cause of lameness in broiler chickens.

This new disease had human origins. Bethan Lowder from the University of Edinburgh has shown that all of the bacteria behind BCO share a common ancestor, which jumped from humans to chickens in Poland, around 38 years ago. From that point on, the bacterium's travel itinerary was set. Just as air travel has facilitated the spread of swine flu among humans, a global distribution network for chickens made it easy for S.aureus to spread all over the world aboard its new feathery hosts. 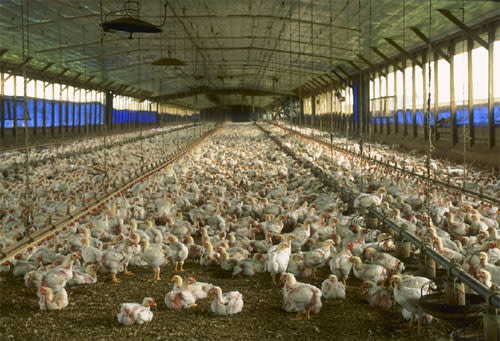 Lowder traced the common ancestry of S.aureus in chickens by analysing the genes of 57 samples. Of these, 48 came from healthy and diseased chickens across eight countries and four continents, and 9 were taken from different species of wild and domesticated birds. Amazingly, she found that two-thirds of all the broiler chicken samples came from a single strain of the bacterium called ST5.

ST5 infects humans all over the world and is one of the most successful strains of S.aureus to do so. But Lowder found that all of the chicken samples were more closely related to each other than they were to any of the human bacteria from the same strain. They all shared a common ancestor - a lineage of ST5 found only in Poland. Around 38 years ago, this pioneering bacterium made the leap from humans to chickens and its descendants have spread from Poland to countries as far as the US and Japan.

Since then, the ST5 strain has adapted to its new host. It has lost many of the genes it needs to cause disease in humans but it has picked up others that allow it to better infect chickens. A complete sequence of the bacterium's genome reveals that since its human days, it has picked up five new genes from other bird sources, none of which are found in humans or other mammals. In fact, Lowder thinks that the ST5 strain may be particularly good at picking up mobile genes from other sources. That might explain why both human and chicken versions are so successful, and why the human one often picks up genes that allow it to shrug off powerful antibiotics.

It's not clear how exactly these changes benefit the bacteria, but certainly, they're much better at resisting a chicken's immune system than their human predecessors. When faced with chicken heterophils - a type of white blood cell - the poultry strains were much more likely to survive than the human equivalents. 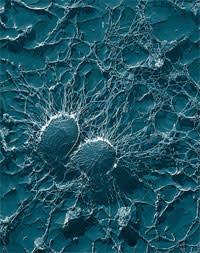 Lowder thinks that globalisation was the key to the new pandemic. In just the last fifty years, the broiler chicken industry has shifted from one dominated by small farms to a multi-billion dollar leviathan controlled by a small number of multinationals. These companies transport a relatively few breeding lines of chickens all over the world, and the low genetic diversity of these birds makes them vulnerable to infections as opportunistic as S.aureus.

She recommends that livestock are screened regularly so that emerging diseases can be picked up, and that stocks should often be cleansed of S.aureus, to nip potential new threats in the bud. Better regulations for international transport wouldn't go amiss either - it's no surprise that Australia, a country with stringent regulations on importing livestock, has no trace of the pandemic S.aureus strain.