Genetically profiling the brain: it all ends with dopamine

Earlier today I linked to a Jonah Leher post on food that hooks into the role that dopamine plays in our decision making. Dopamine looms in the neuroscience angle of Jonah's book How We Decide because the chemical's role in cognition is established. Dopamine related genes are often fingered in behavior genetic studies as the causal root of some observed psychological variation. So a new paper in Nature Neuroscience is in perfect position to stand astride the literal slush pile of this research, Prefrontal and striatal dopaminergic genes predict individual differences in exploration and exploitation:

The basal ganglia support learning to exploit decisions that have yielded positive outcomes in the past. In contrast, limited evidence implicates the prefrontal cortex in the process of making strategic exploratory decisions when the magnitude of potential outcomes is unknown. Here we examine neurogenetic contributions to individual differences in these distinct aspects of motivated human behavior, using a temporal decision-making task and computational analysis. We show that two genes controlling striatal dopamine function, DARPP-32(also called PPP1R1B) and DRD2, are associated with exploitative learning to adjust response times incrementally as a function of positive and negative decision outcomes. In contrast, a gene primarily controlling prefrontal dopamine function (COMT) is associated with a particular type of 'directed exploration', in which exploratory decisions are made in proportion to Bayesian uncertainty about whether other choices might produce outcomes that are better than the status quo. Quantitative model fits reveal that genetic factors modulate independent parameters of a reinforcement learning system.

There are many moving parts here. A lot of the neuroscience-speak is way over my head, so I won't pretend to reprocess what I had to hum through. First the authors review some general psychological & behavioral economic tendencies in terms of how individuals vary in decision making. In plain language it seems that some people have a strong aversion to negative inputs, others tend to focus on positive outcomes, and finally there is the variance in risk aversion (same expected value, but different deviations around that expectation). For example, there is the old behavioral economic chestnut that individuals tend to be risk averse on average, and prefer smaller guaranteed returns over gambling on getting more at the cost of a high risk of gaining nothing. Of course this does not take into account human variation in these dispositions. Using an experimental procedure whereby subjects were rewarded based on increased or decreased reaction times, risk aversion and reinforcement biases were probed. In this paper these psychological phenotypes are simply a preamble, as there is a nearly immediate attempt to relate these behaviors to the specific architecture of the brain, along with its neurochemistry. In particular the interactive role of dopamine, the one neurotransmitter to bind them all. Dopamine is then connected to the genes noted above, which seem to have roles in dopamine related pathways so as to up or down regulate production. Finally the paper also has an abstract computational model of decision making which allows them to associate variation on the specific locus to a particular parameter. Figure 5 illustrates the whole package: 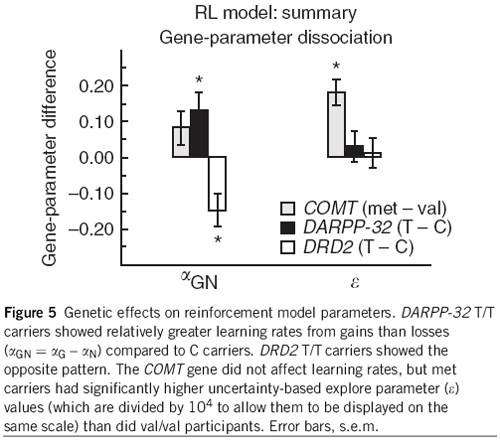 ScienceDaily has a surprisingly lucid exposition of this dense paper:

Varations in two of the genes -- DARPP-32 and DRD2 -- independently predicted the degree to which people responded to outcomes that were better or worse than expected, by reinforcing approach and avoidance type behaviors. These genes affect dopamine processes in the basal ganglia portion of the brain. Frank said this is important for "simple reinforcement of learning processes that you might not even be aware of." Frank and the other researchers also studied exploratory decision-making -- the choices people make when they are in "uncharted territory." They found that variations in a third gene -- COMT -- predicted the extent to which people explored decisions when they were uncertain whether the decisions might produce better outcomes. COMT affects dopamine levels in the prefrontal cortex, known as an executive center of the brain. Frank said this level might be needed to "prevent the more basic motivational learning system from always taking control over behavior, so as to gather more information and prevent getting stuck in a rut." Frank said the findings could have some interesting implications. "We cannot say on the basis of one or two studies," he said, "but if a student isn't doing well in a particular learning environment, [a gene study could show that the student] may be well-suited to a particular teaching style."

Hold up there! As p-ter at Gene Expression Classic observes these loci might pop up on these candidate studies may be false positives. Perhaps better to just look the morphology of the brain, which is "closer" to the phenomenon in question here of interest. Cite:Nature Neuroscience, Published online: 20 July 2009 | doi:10.1038/nn.2342, Prefrontal and striatal dopaminergic genes predict individual differences in exploration and exploitation