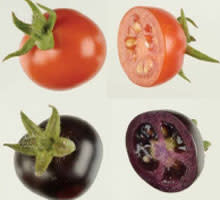 Using a gene from a snapdragon flower, researchers have created a purple tomato rich in antioxidants, and a new study has shown that cancer-prone mice that were fed the altered tomatoes had significantly longer lifespans than those that dined on regular tomatoes. The tomatoes' purple hue was a side effect of the type of antioxidants produced, called anthocyanins. The tomatoes produce levels of anthocyanins about on par with blackberries, blueberries and currants, which recent research has touted as miracle fruits. But because of the high cost and infrequent availability of such berries, tomatoes might be a better source, says [lead researcher Cathie] Martin

In the study, published in Nature Biotechnology [subscription required], researchers used genetically engineered mice that typically develop a variety of cancers at a young age, and live an average of 142 days. A diet that included powder from the modified purple tomatoes

extended the life span of these mice to an average 182.2 days; some mice lived up to 260 days. Regular tomatoes had no affect on the average life span [Ars Technica].

Professor Martin said: "This is one of the first examples of metabolic engineering that offers the potential to promote health through diet by reducing the impact of chronic disease. And certainly the first example of a GMO [genetically modified organism] with a trait that really offers a potential benefit for all consumers" [BBC News].

However, she stressed that the tomatoes' beneficial effects must still be proven in humans; if that is determined, it would still take years for the new and improved tomatoes to make it through the regulatory process and onto supermarket shelves. Related content: 80beats: Six Cups of Coffee a Day Could Give You a Long, Jittery Life DISCOVER: Staying Alive. Could someone alive today live to the age of 150?Image: Andrew Davis, John Innes Centre