Six Cups of Coffee a Day Could Give You a Long, Jittery Life 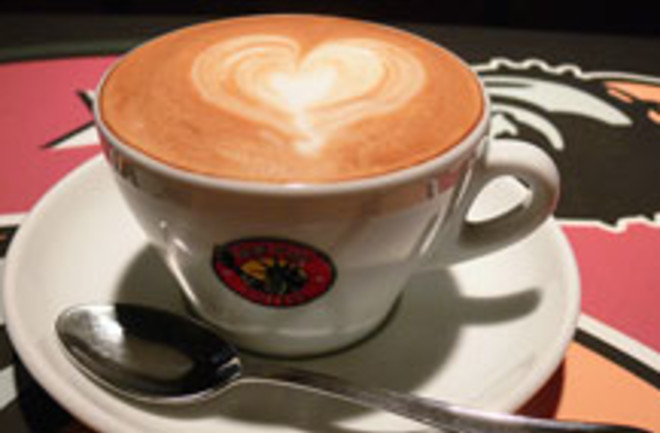 Go ahead, order that latte with a double shot of espresso. Then do it again and again. A new study shows that drinking up to six cups of coffee a day won't shorten your life span, and for women that daily coffee habit may even protect against heart disease.

The Spanish researchers who conducted the study are excited about their findings, but they stop short of prescribing coffee jolts to all. "Our results suggest that long-term, regular coffee consumption does not increase the risk of death and probably has several beneficial effects on health," said lead researcher Dr. Esther Lopez-Garcia.... Lopez-Garcia stressed that the findings may only hold true only for healthy folk. "People with any disease or condition should ask their doctor about their risk, because caffeine still has an acute effect on short-term increase of blood pressure," she said [HealthDay News].

The results show that as coffee consumption increases, the overall risk of death decreases. The association is explained mostly by a decrease in [cardiovascular disease] deaths, Lopez-Garcia says. Women who drank two to three cups of coffee a day, for instance, had a 25% lower risk of dying from heart disease than non-drinkers [USA Today]. However, the study found no association between coffee drinking and cancer deaths.

The findings, published in the journal Annals of Internal Medicine [subscription required], do not pin down the cause of coffee's apparent benefit, and researchers also say that the

lower risk of death did not appear to be linked to caffeine as those who drank decaffeinated coffee also had lower death rates than those who did not drink coffee [Telegraph].

But a few different theories regarding coffee's healthful qualities are percolating.