From "Freedom!" to "Brains!": Shift In Zombie Narrative Reflects Zombie-fication of Society 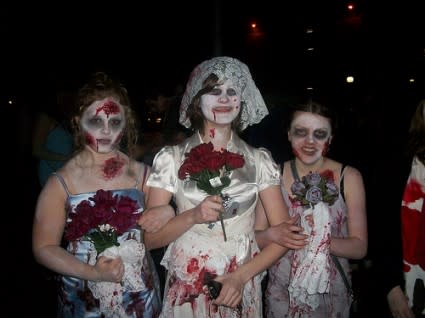 Life is pretty simple for a zombie. You just wander around and try to eat people's brains. But it wasn't always so. In the uncorrupted early years of zombie narratives, zombies were typically the undead slaves of voodoo priests, and their primary motivation was to cast off the yoke of dark magic and rebel against their leaders. For example, the first feature-length zombie film, White Zombie (1932), features a heroine who's bewitched by a voodoo master (ominously named Murder). When she finally triumphs over him and he is pushed off a cliff, she reverts to her normal, non-zombie self. No longer. Nowadays zombies have no real motivation. (When polled as to their life purpose, nine out of 10 zombies replied, "Braaaaaiiiiinnnns!!!") At least one researcher thinks the shift in the zombie story, beginning in the late 1960s, reflects a greater change in society. "With no voodoo master, today's zombies have no clear controller to turn against and free themselves from," says researcher Nick Pearce. "That means there are no effective plans for resistance and no hope for the future. Zombies may well be popular today because they speak to a similar feeling of powerlessness shared by many members of our society." Whoa. Maybe we're all zombies!Pearce thinks the key question is why we as a society are, like zombies, unwilling to take a stand against the powers-that-be, and are overwhelmed by a lack of political interest. It's in the interest of these powers, he says, to have a zombified society that wanders about consuming the latest advertised goods. Pearce will present his findings at the Festival of Social Science in Newcastle, England, next week. Interesting enough---and raises the possibility that Occupy Wall Street is actually a mass zombie exorcism---but this also sounds a lot like Dawn of The Dead, a famous zombie flick released over 30 years ago. (If you haven't seen it, it involves a group of humans seeking shelter from a zombie epidemic in a suburban shopping mall, and is an overt send-up of consumerist culture.) But perhaps I've just got Hollywood voodoo magic on the brain.