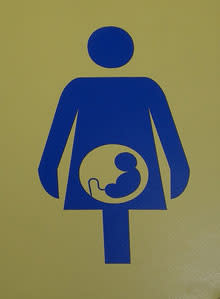 In a remarkable medical feat, researchers used a blood sample from a pregnant woman to work out the entire genome of her unborn fetus. The technique, published in the journal Science Translational Medicine, could provide a safer and less invasive way to check a fetus for fatal genetic mutations. Currently, determining a fetus's genome requires either amniocentesis, in which a needle is inserted through the mother's abdomen into the amniotic sac, or chorionic villus sampling, in which a piece of placenta is removed. But both techniques carry a small risk to the baby, and are reserved for cases when there is an increased risk of genetic defects.

"The major advantage of the technique in this paper is that there's no risk of miscarriage," said Dr. Diana W. Bianchi, a reproductive geneticist at Tufts University who called the work a "technological tour de force." Amniocentesis and CVS testing carry about a 1% risk of miscarriage, she said. [LA Times]

The new technique sequences the fetal genome from fragments present in the mother's blood. In the late 1990s researchers discovered that fragments of fetal DNA are present in maternal plasma

, presumably because the DNA gets broken down and crosses over the placental barrier.

In the years since, researchers have evaluated this DNA to detect many genetic and chromosomal problems in the fetus. But until now, researchers have focused on a single disease or genetic characteristic. [WebMD Health News]

thought it should be possible to piece together the child's entire genome from these fragments. But it wasn't an easy task, since only 10 percent of the DNA present in the plasma is fetal--the rest belongs to the mother.

The fetal DNA was broken up into tiny pieces of about 150 base pairs each; a complete genome contains about 3 billion base pairs. "It's like trying to assemble a jigsaw puzzle with millions of DNA molecules," Lo said. [LA Times]

Lo tested his approach with a couple who were both carriers of beta-thalassemia mutations. If they had both passed on the mutation, their child would have the potentially fatal disease. Lo started by sequencing both the mother and father's genomes. The researchers could then pick out the father's genetic contribution to the fetal DNA in the maternal blood, since the father and mother's genomes are different. The more difficult part was determining the fetal DNA that had been inherited from (and is genetically identical to) the mother, via one of her two sets of chromosomes.

"The deciphering of the part that the fetus had inherited from its mother was technically more challenging," Lo says. "This was because the fetal DNA was surrounded by an ocean of DNA that the mother had released from her own cells." [WebMD Health News]

To figure out which genes were inherited from the mother, the researchers checked the ratio of the mother's two copies of DNA in the plasma. Whichever sequence the ratio was skewed toward would be the inherited sequence (since it would have extra copies from the fetus). The end result: The researchers discovered that the fetus had inherited the mutation from its father, but not its mother. It would be a carrier, but not suffer from the disease. Because of the need to completely sequence both parents' genomes, fetal whole-genome screening is prohibitively expensive. Scanning of particular gene regions, where there are known fatal mutations, could be much cheaper.

"We're about a factor of 100 away from commercial capability, but that will change," says Charles Cantor, one of the co-authors of the study. [Nature News]

Discoblog: The Next Pregnancy Must-Have: A Three-Dimensional Model of Your Fetus

DISCOVER: IVM: A Fertility Treatment that Could Mean Pregnancy for Half the Cost

DISCOVER: The Biology of... Morning Sickness