IVM: A Fertility Treatment that Could Mean Pregnancy for Half the Cost

A cheaper, gentler alternative to IVF may bring hope to infertile couples. 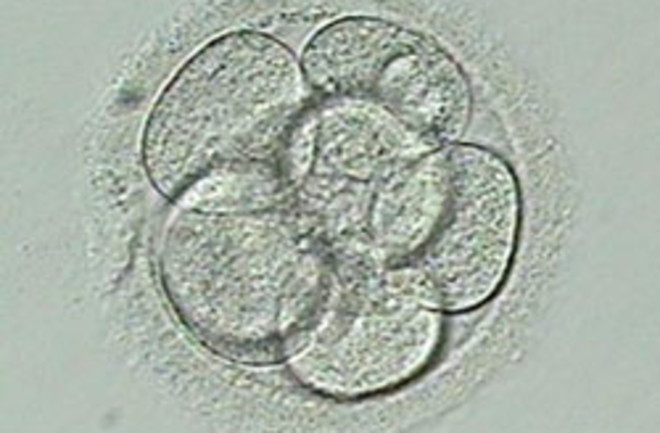 An embryo created through IVM. | Courtesy of Batzofin Fertility Clinic

Amy Timney knew she couldn’t make it through another round of in vitro fertilization (IVF). For the last two years, the 31-year-old New Yorker had been on a brutal and heartbreaking quest to get pregnant. Her trials included daily shots in her buttocks, constant doctor visits for ultrasounds and monitoring, medical complications that nearly required her to be hospitalized, and the agony of waiting—not to mention the financial hit, at around $15,000 for a full IVF cycle—all for zero results.

“My butt was covered in welts and bruises, and we’d killed our bank account, and I thought ‘If I ever have to go through this again, there’s no way I can do that to myself,’” she says.

Amy’s case was complicated by a diagnosis of polycystic ovarian syndrome (PCOS), a hormone condition that puts women at higher risk of ovarian hyperstimulation syndrome (OHSS) from the hormones contained in the shots required by IVF. Symptoms of OHSS range from vomiting to thrombosis to respiratory problems; in a small percentage of cases, it can be fatal.

After a little Internet research and a discussion with her doctor, Joel Batzofin, Timney decided to try in vitro again. But this time, she would undergo a lesser-known alternative, known as in vitro maturation (IVM). While the likelihood of pregnancy was slightly lower, Batzofin explained, the upsides of IVM were clear: a price tag at around a third of IVF and no hormone shots.

IVM and IVF are qutie similar: Both involve the retrieval of eggs from a woman’s ovaries, followed by fertilization in a lab, and then implantation of one or more fertilized embryos back into the woman’s uterus. The crucial difference is the state of the eggs at retrieval: With IVF, the eggs are matured inside the ovaries, while in IVM doctors remove immature eggs and then mature them outside the body.

As such, IVM requires no hyperstimulation of the ovaries, meaning the daily shots are almost entirely eliminated. (IVM patients do need to take three to five hormones prior to surgery,and may also take estrogen for 12 days following their period tostimulate uterine development.) “Anyone who’s ever seen the needles you use [to inject hormones for IVF] knows they’re giant,” Timney says. “It put a big strain on me, and my husband, who did the injecting. IVM has a totally different protocol—you might take hormones as a pill, or a suppository.” After the scaled-down hormone treatment and one or two ultrasounds,patients come in to the clinic for egg retrieval.

Once they are removed, the immature eggs are placed in a petri dish and exposed to a combination of luteinizing hormones and follicle stimulating hormones. The eggs are typically left in this medium for 24 to 48 hours; if they've reached maturation, they're then inseminated. The newly formed embryos are then transferred back into the uterus within four days. The fertilization and transplantation processes are generally the same as in IVF.

Driven by Economics, Embraced by Doctors

Like IVF, IVM was originally developed on cows and other domesticated animals. The technique has been used in countries like Taiwan and Canada for years, but only recently, after some significant improvements, did it start getting attention from American doctors. Batzofin’s clinic is the first to offer it in New York; clinics in Atlanta, Providence, and California also perform the procedure.

Still, it remains largely unknown, and tends to be reserved for women who have PCOS or other conditions that make IVF more difficult. To date, only around 400 babies in the world have been born as a result of IVM, according to Batzofin. His clinic has only completed five cases, with one resulting pregnancy—a twin gestation. The woman has not yet given birth.

“IVM has been around for years and years—we’re just getting better at it,” says Jared Robins, an assistant professor of OB/GYN at Brown University and the director of the Center for In Vitro Maturation Excellence at the Woman and Infants Hospital of Rhode Island. His clinic has been offering IVM for women with PCOS for the last year. “The maturation rates [of eggs] are 40 to 50 percent, whereas they used to be 10 percent. The pregnancy rates are also a lot better. We understand how to handle the eggs a lot better now.”

The probability of the procedure resulting in pregnancy is key: While the success rates for IVM are better than in the past, they’re still lower than those for IVF. Pregnancy rates for both treatments vary based on a number of factors, the most important being a woman’s age. A typical 35-year-old woman with no major health problems can expect around a 40 percent success rate for a single cycle of IVF—a number that falls to around 32 percent with IVM.

Still, the drop in pregnancy rate looks less daunting when you factor in the cost: A full cycle of IVF can run from $10,000 to as much as $30,000, depending on the city—and insurance policies may cover only a fraction of the cost, if any. A full IVM cycle, meanwhile, is closer to $6,000. And since both procedures have a reasonably high failure rate the first time around, many women undergo—and pay for—two or three cycles before they get pregnant.

“The increase in interest [in IVM] is market driven—people want to do lower-cost IVF,” Robins says.

Doctors who offer the procedure warn that it’s still untested in the general population. “I’m not quite sure IVM is ready for prime time just yet as an IVF alternative. We don’t have a lot of data on patients that don’t have PCOS,” says Joe Massey, a physician at Batzofin Fertility Services who performs IVM. “But as we gather more data, I think it will become far more popular, and offer more opportunities for women who can’t afford IVF.”

After weighing all the options with her husband, Amy decided to go through a full cycle of IVM. Batzofin and his colleagues removed eight immature eggs from her ovaries, and saw three of them mature and become successful embryos. Two were implanted.

Unfortunately, neither embryo attached, and Amy did not become pregnant. She is planning to begin another cycle in the next few months. As with any fertility treatment, IVM holds no guarantees.