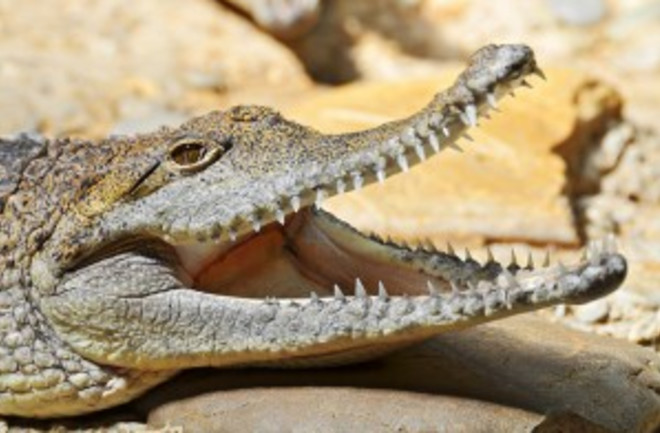 We covered a couple of interesting scientific papers relating to poker this week (asking whether poker "skills" actually help you win games, and how to use body movements to judge the quality of other players' card hands), and it reminded us of this crazy study from 2010. The scientists were investigating whether having intense experiences that result in a "high arousal state" can change problematic gambling behaviors. They first had tourists visiting an Australian crocodile farm either hold a live crocodile or not, and then asked them to play an "electronic gambling machine". They then correlated how people played to their self-reported gambling behaviors and to whether or not they held the crocodile. The results indicated that people with problematic gambling behaviors placed higher bets after holding a crocodile, unless they felt bad about their gambling problems (those participants actually bet less money after holding the reptile). The moral of the story? If you feel bad about your gambling, you should be sure to snuggle a dangerous animal before going into a casino.

Never smile at a crocodile: betting on electronic gaming machines is intensified by reptile-induced arousal. "Tourists at the Koorana Saltwater Crocodile Farm in Coowonga, Queensland, Australia, including 62 males and 41 females, aged 18-66 (M = 34.2, SD = 13.3), were randomly assigned to play a laptop-simulated Electronic Gaming Machine (EGM) either: (1) prior to entry, or (2) after having held a 1-m saltwater-crocodile. Gambling behavior; including bet-size, speed of betting, final payouts and trials played on the EGM; was investigated with respect to participants' assigned arousal condition, problem-gambling status, and affective state. At-risk gamblers with few self-reported negative emotions placed higher average bets at the EGM after having held the crocodile when compared to the control. In contrast, at-risk gamblers with many self-reported negative emotions placed lower average bets at the EGM after having held the crocodile. The results suggest that high arousal can intensify gambling in at-risk players, but only if this feeling state is not perceived as a negative emotion."

Related content: Discoblog: NCBI ROFL: Phase 1: Build army of alligators that can run on land. Phase 2: Take over the world!

Discoblog: NCBI ROFL: Might as well face it, you’re addicted to love.