Forget poker faces, watch your opponent's arms if you want to win. 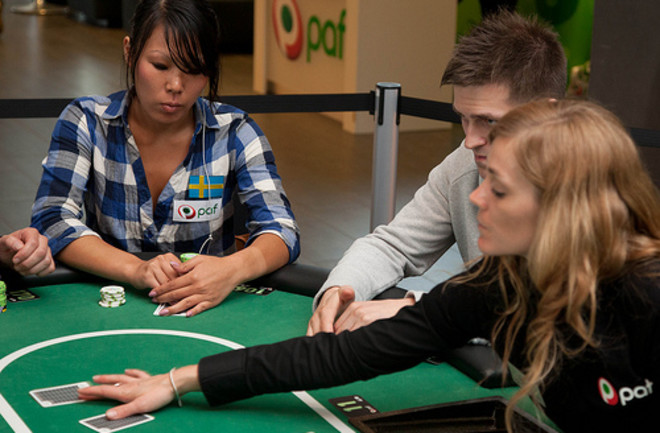 Although the paper we covered yesterday indicates that skill plays a very small role in winning a poker game, gamblers are always looking for ways to increase their chances of winning. Perhaps because we are programmed to focus on facial expressions, there have been a number of studies on whether facial expressions gave give clues to the quality of another player's hand (one such study suggests wearing a smile is a pretty good strategy). The authors of this study are taking a fresh approach: asking whether the body movements of poker players can give away secrets that their faces are hiding. Turns out there is more information in arm movements than you may expect:

Quality of Professional Players' Poker Hands Is Perceived Accurately From Arm Motions. "In the card game of poker, players attempt to disguise cues to the quality of their hand, either by concealment (e.g., adopting the well-known, expressionless “poker face”) or by deception. Recent work, however, demonstrates that motor actions can sometimes betray intentions. The same action can have different movement dynamics depending on the underlying intention, and these subtle differences can be decoded by observers. Thus, professional poker players’ intentions may be visible from their actions while moving poker chips to place bets. Even though professional players may be able to regulate their facial expressions, their motor actions could betray the quality of their poker hand. In three studies, we tested this hypothesis by examining observers’ perceptions of poker-hand quality. We also examined individual differences in sensitivity to nonverbal behavior and potential diagnostic motor behaviors as cues to hand quality." Bonus quotes from the full text: "Twenty brief silent video clips (mean duration = 1.60 s, SD = 0.68 s) of professional poker players placing a bet were extracted from randomly sampled videos of the 2009 World Series of Poker (WSOP) tournament. Three versions of each clip were produced: Unaltered clips showed players’ bodies from the table up, face-only clips showed players from the chest up, and arms-only clips showed only players’ arms pushing chips into the table...These analyses also showed that judgments in the face-only group were marginally worse than chance, which suggests that players exhibited deceptive facial cues. When isolating arm movements, however, analyses showed that untrained participants judged the quality of poker hands better than chance, which suggests that perceptions of arm movements exert an independent influence on judgments of poker-hand quality. Judgments made when viewing the players’ upper body (arm motions plus the face) were at chance."