Flashback Friday: An unusual finding during screening colonoscopy: a cockroach! 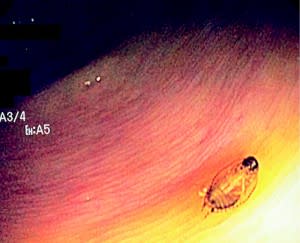 Giving colonoscopies probably gets boring after a while -- long stretches of intestine, maybe a polyp here or there. So these doctors were probably pretty surprised when they came upon...a cockroach! "How did it get there?", you might be asking (after vomiting a little in your mouth)? Apparently, the patient had a cockroach infestation at home, and the doctors guessed she may have inadvertently eaten one of the creepy crawlies. Whole. Probably best not to think about it too hard. Especially since this isn't an isolated incident.

An unusual finding during screening colonoscopy: a cockroach! "A 52-year-old woman with a history of depression was referred by her primary physician for colorectal cancer screening. She had no family history of colorectal cancer and a review of systems was positive for abdominal bloating. Bowel preparation was done using 4 L of polyethylene glycol the evening prior to screening colonoscopy. The procedure was uncomplicated with no gross mucosal pathology, however, an insect was found in the transverse colon (Fig. 1, to the left), was found in the transverse colon on a routine screening colonoscopy.). The insect was aspirated and sent to the lab for further identification. The insect had three body segments (head, thorax, and abdomen) with ventrodorsal flattening of the body and a segmented abdomen, three pairs of legs extending from the thorax (with spikes and claw-like terminal appendages), elongated hind legs, and a pair of elongated antennae extending from the head to beyond the hind legs.These morphologic findings were most consistent with the nymph form of Blattella germanica (German cockroach) of the Blattellidae family, a common household pest. The patient had a cockroach infestation at home and hence it was hypothesized that she may have inadvertently ingested a cockroach with food." Related content: What happened to all the giant mounds of dinosaur poop? (Hint: it involves cockroaches)he antifungal powers of cockroach poop.What’s worse than a colonoscopy? A colonoscopy involving an earthworm.