Field Notes: Meddling With Mosquito Romance in the Name of Public Health

The duets sung by male and female mosquitoes are a critical part of their mating ritual. If researchers can master mosquito music, they may be able to abort a whole generation of disease-carriers. 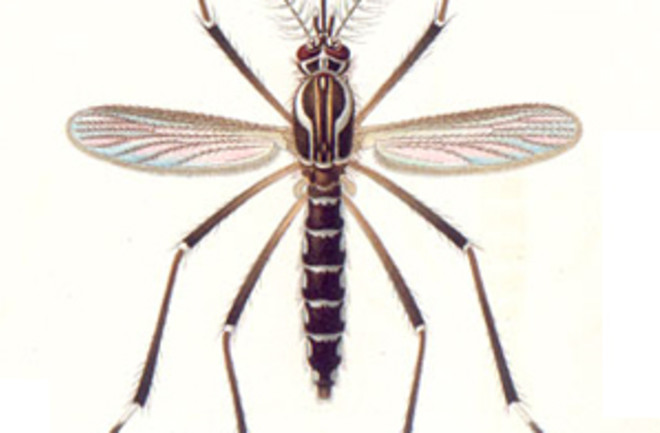 Ithaca, NY—Flying around on a miniature leash made from a single strand of her human handler’s hair, a female Aedes aegypti mosquito gravitates toward the love song of a prospective mate. As she flies she calls to him by modulating the whine of her fluttering wings. But “he” is merely an iPod earbud playing mosquito tunes. By means of this strange, sterile courtship, Cornell University scientists hope to breed control of mosquito-borne disease.

“For a long time, people just studied how to kill the mosquitoes and not really anything about their mating behavior,” laments Cornell’s Lauren Cator, whose long, blond tresses supply the tethers for her team’s experiments. “But now more and more people are interested in learning about basic mosquito biology because, frankly, extermination is not working out so well in terms of disease control.” Cator and her colleagues are particularly interested in the painful and often fatal viruses carried by A. aegypti: yellow fever and dengue, also known as breakbone fever. Although vaccines have helped to block the spread of yellow fever, dengue has neither prevention nor cure and affects up to 100 million individuals every year in tropical regions around the world.

A. aegypti probably attract the opposite sex using several combined wiles, including the visual appeal they present to each other’s flylike compound eyes and the lure of various chemical signals they emit. But the astonishing acuity of their hearing, which has only just come to light in the Cornell studies, may play the most important role in their mate selection.

The flying female makes a noise, called a flight tone, well known to humans as the whining prelude to a mosquito bite. The sound comes from the beating of her wings and the sympathetic vibration of her thorax, buzzing at a frequency of 400 hertz (close to middle C). The male, being smaller, hums in flight at the higher frequency of 600 hertz. But in the close proximity of courtship on the wing, male and female respond to one another’s sound effects, raising their rates until they synchronize at 1,200 hertz. Researchers call it a “love song,” for when the couple converge on this shared harmonic frequency—far above what mosquitoes were thought capable of perceiving—the two of them copulate.

“There’s really a duet going on here between the male and female mosquitoes,” says Cornell neuroethologist Ron Hoy, widely known as the go-to person for any questions concerning bug ears. “The female is being choosy. And why not? She can up the ante—even check into the male’s physiological fitness by challenging him in this operatic duetting.” Hoy thinks that the speed of the male’s response may reveal his suitability as a father: “Not just ‘How high can he go?’ but also ‘How fast?’ It’s as though they’re singing that song from Annie Get Your Gun, ‘Anything you can do, I can do better.’”

To assess the importance of the love duet, Cator is saving hundreds of mosquito eggs (picture sprinkles of spilled pepper on pieces of paper) from various pairings in the lab. As the eggs hatch, she will try to determine the effect of their parents’ synchronized singing—whether truly harmonious matings produce unexpected benefits, such as offspring that have a longer life span or that lay an increased number of eggs.

Cator’s Cornell colony of A. aegypti live dormitory style, 100 or so together in several metal mesh enclosures, each about the size of an ordinary fish tank, inside a large incubator that maintains a tropical clime. On one side of every cage, the mesh has been exchanged for an expanse of knit fabric—what looks like half a white sweatshirt with one dangling long sleeve, loosely knotted to prevent insect escape. It is through this sleeve that the mosquitoes are fed.

“I don’t feel a thing,” says entomologist Laura Harrington, the senior member of the Cornell team, fitting her own practiced arm through a sleeve and watching a few dozen female A. aegypti alight to feast on her. (Only the females take blood meals, which they require for maturing their eggs; the males survive on flower nectar in the wild and sugar water in the lab.) Harrington could probably delegate this duty to Cator or to some other graduate student in her department, but she considers nurturing these disease-free research subjects part of her job.

When Harrington withdraws her arm, she hasn’t a mark on it. After volunteering as A. aegypti fodder for 10 to 15 minutes almost every day over the past 10 years, she has lost all sensitivity to the creature’s bite. A mosquito of any other species, however, would leave her with a typical itchy welt. And, unfortunately, repeated bites from A. aegypti confer no protection against dengue. Harrington contracted the virus while doing field work in Thailand and spent weeks in the hospital. At that same time, an Anopheles mosquito gave her malaria.

Harrington offers to let me examine some A. aegypti specimens under a microscope. She pokes one end of a flexible tube contraption into their tank, pops the other end into her mouth, and blows on it, propelling a handful of mosquitoes into a glass vial. Under 100x magnification, I can see the females’ bellies bulging and red with Harrington’s blood. The males are easily identified by their smaller size and bluer color—and also by their much bushier antennae, which make them look mustachioed. The two “ears” of both sexes are silvery, doughnut-shaped structures called Johnston’s organs, located at the base of each antenna.

“They hear by the rocking—the vibration—of the antenna within the Johnston’s organ,” Cator explains, “so if you whack off their antennae, they can’t hear.” She knows from experience: She had to deafen some mosquitoes as controls, to demonstrate their consequent lack of response to love songs.

Then Cator found a better way. “If you stick glue in their Johnston’s organs, their antennae can’t rock and they’re effectively deaf, but it’s not nearly as traumatic,” she says. “I use Elmer’s, and they don’t seem to have a problem with that.”

Elmer’s is also Cator’s material of choice for attaching the hair-tether to the mosquito’s thorax, behind the head but well clear of the wings so as not to impede their beating. In her experiments, she wants to see how the males and females sing together, so they need free movement of their wings. Her fellow researcher Ben Arthur, however, needs to immobilize the wings so he can probe the way the mosquito brain responds to love songs. Arthur works with Hoy in a sound lab that contains a miniaturized recording studio. Here he pinions his mosquitoes between tungsten electrodes to monitor the crackle of electric potential that fires in response to a love song. “It took me several months,” Arthur says, “to build the rig, insulate everything, and do all the control experiments to make sure that what I was recording was neurons, not stray currents or wings flapping.”

Arthur carries mosquitoes from the entomology department in a cup with a mesh cover “so they can breathe but not fly away.” Through a hole in the side of the cup (“a small one, so they won’t find it very quickly”) he sucks out one subject via a mesh-covered plastic tube (“so I don’t inhale it”), transfers it to a vial, and puts the vial in an ice bucket. “Mosquitoes are cold-blooded,” he says. “Chilling makes them lethargic and unable to fly.”

He places the cooled mosquito under the microscope on a precooled metal block. “Then I put some paraffin wax on the end of a little stick and melt it with a soldering iron,” Arthur says. “I touch it to their backs and tinker a bit, spreading the wax around the stumps of the wings so when they warm up again they can’t start flapping. Any movement would produce lots of artifacts [noise] in the recordings. And I want to get just the electric voltage that is generated by their neurons.”

Every detail about mosquito flight tones —how they are produced, how they are perceived, and how males and females harmonize—is important to the scientists, since they do not yet know which signals are the most significant.

Soon after mating, the females quit trying to adjust their flight tones to harmonize with the males. At that point, their behavior suggests, they no longer see any point in bothering. The females’ loss of interest after a single mating suggests that if they could be fooled into pairing with mutant males—laboratory-reared to generate sterile offspring—they might duck out of the mating game for several egg cycles, or perhaps permanently. An entire generation of mosquitoes would then fail to reproduce, and the human population might enjoy some respite from dengue infection.

That means the decoy males, when released in disease-endemic areas, will have to know how to behave. In one early trial, they fouled up their courtship by swarming together near the release site instead of lying in wait where they were likely to encounter mates (i.e., around human feet). Cator suspects that the males must also know how to woo when a female comes along—most likely by singing two-part harmony, in shared harmonic frequency.