Should you add a little nattо̄ to your life? 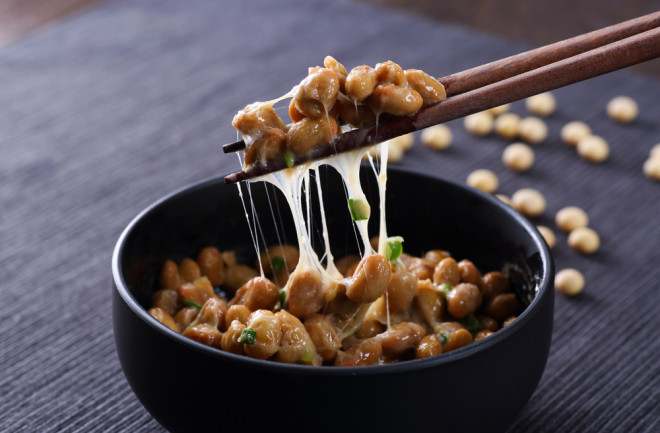 It’s hard to say exactly when humans started eating fermented foods. That’s because fermentation is a process that occurs naturally. Possibly one of the oldest examples is fruit falling to the floor, its sugars breaking down, and producing alcohol. Fermentation is everywhere, and has been for a long time, but we didn’t always know it was healthy: it just tasted better.

“It changes the composition of food in many ways,” says Tim Spector, professor of genetic epidemiology at King’s College London and author of Spoonfed and The Diet Myth. Alcohol is just one example, he says, in which fruit or cereals are changed by the addition of microbes, including yeast.

“You can change coffee beans, chocolate beans, into something that’s edible; [fermentation processes] break it down and make it softer and give it a milder format,” Spector says.

The Other Processed Food

Fermented foods are actually an example of processed food. That’s because processed foods, by definition, include pretty much any food that’s undergone some sort of chemical or mechanical process — this includes milling grains, pasteurizing milk, mincing meat, among other processes — and so they’re not all bad for you. Foods that have undergone the fermentation process — once called “cold cooking, Spector says — are far from it.

Fermentation can be loosely defined as the introduction of a microorganism to a foodstuff that will alter it, breaking it down without letting it go “bad,” for desirable effects. The time it takes varies, and can take just two weeks, as is the case with fermenting grapes for wine. By comparison, Japan’s original historic sushi, funazushi is fermented using rice anywhere between two and three years.

If there were a country whose cuisine excels in the realm of fermented foods, it’s Japan. Referred to under the catch-all term hakkо̄ (fermentation), these foods form the very basis of gastronomy in the island nation.

“It is hard to imagine a [traditional] Japanese meal without fermented food,” says Eric Rath, professor of premodern Japanese history at University of Kansas. “Take away tsukemono (pickles), miso (fermented soy bean paste), soy sauce, and what do you have left?”

Live microbes appear in a whole range of fermented foods. They act in the same way as probiotics, but the difference with pickled vegetables is that contain not only the “seeds” (microbes) but also the “fertilizer” (food the microbes can live off).

“Now, the probiotics work, we think, by improving the environment of the existing microbes [in the gut]. They stimulate them and they make some species grow, but generally enhance the environment without staying permanently within the community.” They pass through in a few days, leaving a “healthier” environment in their wake.

But studying the effects of fermented foods on gut microbiome is tricker than expected. Though a 2020 study in The Journal of Nutrition found evidence that changes in the gut microbiome could be attributed to a relationship between consuming fermented food and overall health, it admits more research needs to be done.

An article published in the journal Nutrients in 2019 similarly reported that there is very limited evidence available for the efficacy of fermented foods in terms of their healthiness, calling the majority of studies “low quality,” and stating that no human studies have been done on the effects of kombucha, tempeh or kimchi on gastrointestinal health.

Not only are we somewhat in the dark when it comes to the health benefits of fermented food, we also don’t really know how it works. Spector notes that while we know there are different bacteria present in fermented foods and probiotics — Lacto bacillus is a common one — “we don’t know exactly how these microbes change the other microbes [in the gut].”

Though the reasons why may not be forthcoming, the health effects of Japanese fermented food have long been declaimed within the country. Nukazuke, which utilizes rice bran to ferment vegetables — now known to contain ample vitamin B1 — helped to stave off a beri-beri (vitamin B1 deficiency) epidemic in 17th-century Edo (the old name for Tokyo).

Nattо̄ — soy beans fermented using the microbe Bacillus natto — has also been historically commended. In Honchōshokkan, a book written by scholar and food researcher Hitomi Hitsudai, published in 1695, nattо̄ is recommended for its ability to harmonize the gastrointestinal tract and “remove poison.”

There may be some scientific basis behind this long-standing veneration of nattо̄. As well as boasting high levels of dietary fiber, protein, calcium, iron and potassium, a randomized, double-blind clinical trial of nattokinase (an enzyme extracted from nattо̄) found that it drastically reduced diastolic blood pressure compared to the placebo group.

A study last year published in the Journal of Functional Foods seems to have found a link between obesity and nattо̄ consumption — in mice, at least. Bacillus natto appeared to change the gut microbiome, increasing levels of gut bacteria Verrucomicrobias to 42.51 percent of total intestinal microbes, and the number of Actinobacteria rising to 2.45 percent. These changes helped reduce the amount of fat tissue that accumulates.

“It still doesn’t prove that it’s going to work in humans, although it gives you a reason it might,” Spector says, adding that human studies are much tougher and need to be done over long periods of time.

Why are human studies of nutrition so difficult? Take a study on the health benefits of nattо̄, for example. Participants would need the exact same diet (no alcohol or tobacco) and exercise regimen. One half of the group would, somehow, have to be fed nattо̄ without their knowledge — neither participants nor researchers could know which half, ruling out placebo effect in knowing it may be healthy. You’d also need to take regular blood tests and other medical check-ups. It would also need to be conducted over multiple years, continuously, with participants confined to a lab. The cost would be vast, the ethics questionable.

While a large scale, global study of gut microbiomes around the world would be nigh on impossible, evidence does present itself: as well as lower levels of diabetes and heart disease in Japan, there’s lower mortality from coronary heart disease. One 2015 study makes multiple theories as to why that might be — namely, lower rates of obesity in Japan and diet. Japan also has the longest average life expectancy of the G7 nations; this is for a number of reasons, including diet.

“The Japanese love of many fermented soy products could be one reason that they have much better health than in the west, [and] stay slimmer despite eating lots of rice and other high carbohydrate food,” Spector continues. Smaller portion sizes, starting as young as three-years-old according to one study, could play a big role. Another is physical activity: in a 2020 study published in the Journal of Sport and Health Science measuring such levels, Japanese participants accumulated far more pedometer steps than their American counterparts, who had a higher incidence of metabolic syndrome (that’s despite the Japanese participants smoking and drinking alcohol significantly more).

It would only be guesswork to solely attribute fermented food to the healthiness of the Japanese population, but Spector notes that “all vegetables are good for you, so if you ferment them, they’re even better.”

Soy products aside, “fermented milks, cereals, fruit and vegetables, meat and fish,” according to a 2019 study, have a higher antioxidant effect and contain more bioactive molecules (those which have affect organic tissue) than their non-fermented counterparts. They may also be able to affect brain activity and the central nervous system.

You don’t have to be in Japan to take full advantage of fermented foods, however. Kombucha, sauerkraut, kimchi, even cheese and yogurt are all readily available. Kajiwara, believes that, in order to further popularize fermented foods in the west, the approach should be more universal.

“The Japanese way is too narrow, too particular,” Kajiwara says. “The professional world of fermentation is hard to imitate, and if you specialize in materials unique to Japan, which can be tricky to source overseas, it’s even more difficult.”  She speaks from experience, living in Canada herself, but her own Instagram account features her adventures in the world of homemade hakkо̄ that make it look simple.

She cites books such as Noma Guide to Fermentation and Koji Alchemy that are helping fermented food gain traction outside of Japan. Mentioning “amino paste” — a cover-all term for ingredients like miso that’s gaining traction in the world of fermentation outside of Japan — Kajiwara continues: “For [hakkо̄] to spread worldwide and become famous, it would be impossible if it didn’t somehow match the zeitgeist and attract attention.”

Should we be eating more fermented food? “Yes — definitely,” says Spector. The benefits loom large: fermented foods are cited as anti-diabetic, anti-hypertensive, and antioxidant. They have the purported potential to break down FODMAP components. They can contain bioactive molecules and are swarming with vitamins.

You could go for unsweetened, non-low-fat yogurt, kefir, good quality (non-processed) cheese, kimchi, kombucha, sauerkraut, or — if you’ve got access to them — any one of Japanese fermented soy bean foods like miso or nattо̄, or B1-packed nukazuke.

The important thing, Spector continues, is to have a small amount most days rather than have a big splurge once every two weeks: “If we did that we’d all have healthier gut microbes.”