Fast Food News: It Boosts Impatience, and What Trumps KFC's Double Down? 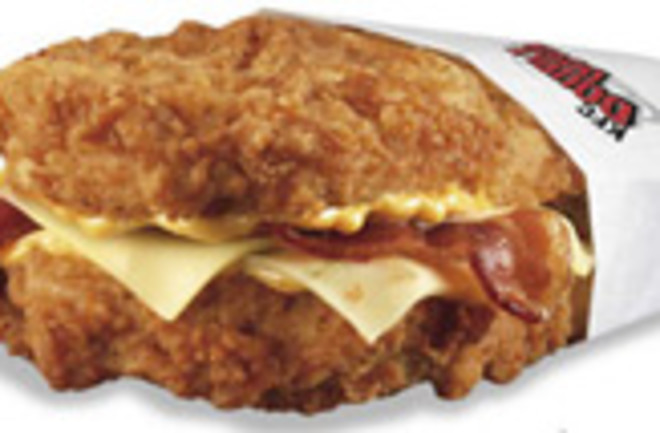 It's a common nutritional fail--you pledge to make a nice, fresh home-cooked meal, but get impatient and opt for fast food instead. Now, new research suggests that 'we are how we eat' and that the mere thought of fast food can result in general impatience. Researchers from the University of Toronto conducted a series of experiments in which they showed volunteers logos from several fast-food chains or asked them to recall the last time they'd visited, writes Scientific American.

And they found that folks who had thought about fast food would then read faster, even though no one told them to hurry. And they also expressed a preference for time-saving products, like shampoo plus conditioner. And they tended to opt for immediate rewards, like getting a small cash payment right away rather than waiting a week for a larger sum.

Looking at the results, the researchers conclude that a fast-food lifestyle may not only impacts people's waistlines, but may also have a far-reaching and often unconscious impact on their behavior. In other fast-food news, over the last couple of days the American people have been simultaneously horrified and fascinated by KFCs new Double Down sandwich--which is two pieces of fried chicken sandwiching a bunch of bacon and cheese. KFC claims this sandwich has 540 calories and 32 grams of fat, which might not make it a smart choice if you're watching your weight or your overall fitness. But The Consumerist says the Double Down might not be as bad for you as a salad at Wendy's. A little poking around on the major fast food chains' websites revealed some heart-stopping details; which The Consumerist reveals. The site found that Burger King'sTriple Whopper has 1160 calories, while its Tendercrisp Chicken Sandwich was packed with 800 calories. Even their Garden Salad packed a punch with 670 calories. At McDonalds, the burgers were in the 700-calorie range, with the Angus Mushroom & Swiss burger at 770 calories and the Double Quarter Pounder with Cheese at 740 calories. At Wendy's, the Chicken BLT Salad With Honey Dijon Dressing had 720 calories, the Baconator Double packed 980 calories and the Southwest Taco Salad with ranch dressing and tortilla strips was 640 calories. That sound you hear? That's your arteries screaming in fear. Related Content: Discoblog: Fast Food Joints Lie About Calories (Denny’s, We’re Looking at You) Discoblog: Grand Engineering Challenge of Our Era: A Non-Lethal Hot Dog Discoblog: How Deep Fryer Grease Can Become an Energy-Saving Coating for Your Roof Discoblog: NCBI ROFL: Wait, kids actually drink the soda they buy from vending machines?Image: KFC