Hipsters aside, most of the straight women I've talked to have stated a strong preference for clean-shaven men, which makes the research presented in this paper a bit of surprise. When shown pictures of the same men with differing facial hair lengths, both men and women expressed a preference for full beards and heavy stubble, respectively. But pictures are one thing, and beard burn is another. We demand a followup study that requires the participants to actually kiss those hairy faces!The role of facial hair in women's perceptions of men's attractiveness, health, masculinity and parenting abilities. "Facial hair strongly influences people's judgments of men's socio-sexual attributes. However, the nature of these judgments is often contradictory. The levels of intermediate facial hair growth presented to raters and the stage of female raters' menstrual cycles might have influenced past findings. We quantified men's and women's judgments of attractiveness, health, masculinity and parenting abilities for photographs of men who were clean-shaven, lightly or heavily stubbled and fully bearded. We also tested the effect of the menstrual cycle and hormonal contraceptive use on women's ratings. Women judged faces with heavy stubble as most attractive and heavy beards, light stubble and clean-shaven faces as similarly less attractive. In contrast, men rated full beards and heavy stubble as most attractive, followed closely by clean-shaven and light stubble as least attractive. Men and women rated full beards highest for parenting ability and healthiness. Masculinity ratings increased linearly as facial hair increased, and this effect was more pronounced in women in the fertile phase of the menstrual cycle, although attractiveness ratings did not differ according to fertility. Our findings confirm that beardedness affects judgments of male socio-sexual attributes and suggest that an intermediate level of beardedness is most attractive while full-bearded men may be perceived as better fathers who could protect and invest in offspring." 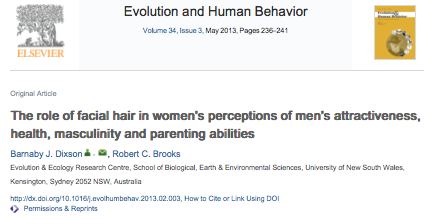 Related content: Discoblog: NCBI ROFL: If you want to get hired, better shave that beard.