Recent studies have looked at the effects of calorie restriction on health. 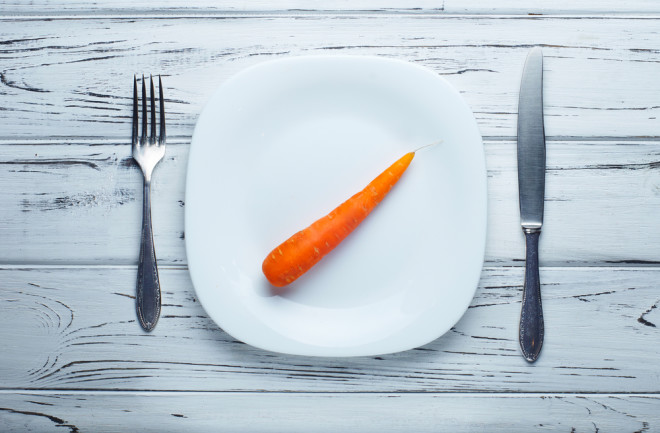 Eating is one of the great pleasures of life. But eating too much places people at risk for chronic illnesses and shortens life expectancy. Seven of 10 Americans are overweight or obese, according to the Centers for Disease Control and Prevention.

Being overweight is so common, people don’t recognize when they’ve crossed the belt line; only 36 percent of overweight/obese people think they weigh too much, says a recent Gallup poll. People want to feel healthy and most want to live a long time. But practically speaking, the price may be too high. It means pushing away that extra plate of food, and perhaps more.

Decades of lab-animal studies connect health and longevity to dramatic caloric restriction. Scientists continue to replicate these animal studies in their quest to figure out what causes aging. One of these scientists is Paolo Sassone-Corsi, the director of the Center for Epigenetics & Metabolism at the University of California, Irvine. He’s the lead author of a paper published in August in the journal Cell that shows how our biological clock affects metabolism.

A big one is overeating. Eating too much can “completely reprogram the clock system that normally works perfectly,” Corsi says. The result can mean higher risk for chronic illnesses and early death. Corsi conducted an experiment in which lab mice underwent a 30 percent reduction in calorie intake. “They lost weight, they were healthy and they lived longer,” Corsi says. “That is the amazing thing.”

A low-calorie diet appears to reset circadian rhythms, from which comes health and longevity. This is quite the carrot-on-the-stick for people wanting to be forever young. But at this point, Corsi doesn’t recommend a 30 percent reduction in calories for fit humans, and it likely wouldn’t improve their health. Studies have shown benefits with a 10 percent reduction in calorie intake, he says. And it could be that exercise is as beneficial, though Corsi says moderate eating and regular exercise are the ideal. Many questions remain, in part because human clinical trials involving low-calorie intake are scant. Corsi is currently trying to organize human trials.

The ‘Noise’ of Aging

Another scientist studying the under-the-hood causes of aging is Jean-Pierre Issa, director of Fels Institute of Cancer Research at Temple University’s medical school. Earlier in September, he and colleagues published a paper in Nature Communications that suggested epigenetic drift is a factor in aging.

When body cells aren’t working as well as they used to, chronic illnesses and other signs of aging develop. “The overall pattern is that of progressive noise compared to the young,” Issa says, “and this is what we call [epigenetic] drift. People who have more drift tend to have more diseases and more cancers and die younger than people of the same age with less drift.”

But Issa found something that quiets the noise: calorie restriction. In one experiment, a group of mice was fed 40 percent fewer calories from when they were months old until they were about 3 years old, the typical life span of mice. Compared to the control mice, those on a diet were healthier and lived longer.

But weren’t they starving? “One can survive on a range of calories,” Issa says. “The body adapts to what it’s getting. We can live with 40 percent of calorie restriction. In fact, some people do that.”

But Issa doesn’t recommend it. “There are some mice strains — which would be equivalent to people because people are genetically diverse — in which calorie restriction has no effect,” he says. And there are some cases where mice life was shortened. “Someone could say, ‘I will go on calorie restriction,’ and it could end up hurting them,” Issa says.

Exercise might offer better health results than severe calorie restriction, Issa says. “Someone who is slightly overweight but exercises every day is probably healthier than someone who is lean but never exercises.” But so much remains unknown.

“I don’t want to leave you with the idea that we know what people should eat,” he says. “It could be that eating 1,500 calories a day or 2,500 calories a day is essentially the same, as long as you remain active and exercise. And maybe they are not the same. No black and white answers.” The search for the fountain of youth continues.