Does a 200-Year-Old Gourd Contain the Blood of a Beheaded King? 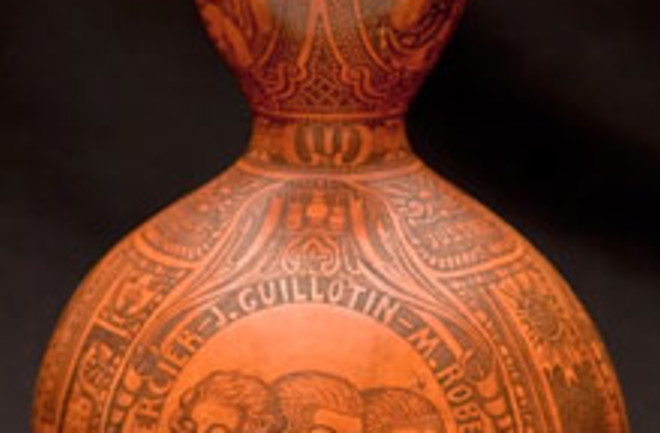 Dried blood on a handkerchief, a $700,000 gourd and one dead king. A forensic murder mystery? Nope, just another genetics paper. I mean, it is gourd season, what did you expect? The dead king in question is Louis XVI (the last of the French kings), who was ceremoniously beheaded on January 21st, 1793. After the beheading, attendees rushed the stage and dipped their handkerchiefs in the royal blood. Over two hundred years later, some of that blood may have been found--dried to the inside of a decorative gunpowder gourd. The story goes that one of the attendees rushed home and stuffed the bloody handkerchief into the gourd for safekeeping. In a study published in the journal Forensic Science International: Genetics, researchers analyzed some of the dried blood scraped from the inside of the gourd to find out if it really could be the king's blood. They checked the Y chromosome to see if the blood-donor was male, and checked for the presence of a blue-eye gene, HERC2. The blood was indeed from the correct time period and belonged to a blue-eyed male--so far, the evidence fits the blue-eyed king. More genetic information about the family will be needed to confirm the identity, the study's lead author told Wired's Dave Mosher:

“The next step is find a descendant either of the king or his mother,” said Davide Pettener, a population geneticist at the University of Bologna in Italy who helped with the analysis. “Otherwise we’ll have to try to get a sample of the dried heart of Louis XVI’s son.”

The son died of poisoning two years after Louis was killed and his heart is stored in a glass vase at the Cathedral Basilica of St. Denis, but it might be difficult to get permission to sample. The family who owned the gourd wanted to see if the blood really did belong to Louis XVI, and approached Pettener's colleague to analyze it. The gourd was allegedly given to Napoleon Bonaparte but for the last 100 years belonged to the family, the researchers told Wired

The gourd, presently valued at about 500,000 euro ($700,000), is emblazoned with key figures of the French Revolution and bears an inscription that reads, as translated from French into English by the researchers, “Maximilien Bourdaloue on January 21st, dipped his handkerchief in the blood of the king after his beheading.”

Related content: 80beats: Bloodstained Tools From 13,000 Years Ago Found in a Suburban Backyard

Not Exactly Rocket Science: How inbreeding killed off a line of kings

Gene Expression: Inbreeding & the downfall of the Spanish Hapsburgs