Bloodstained Tools From 13,000 Years Ago Found in a Suburban Backyard 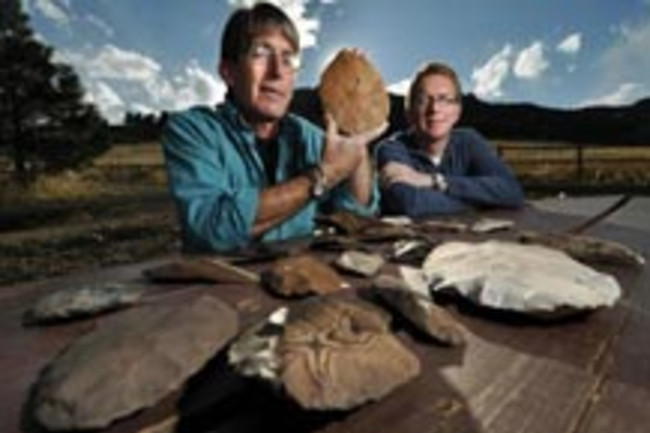 The tools found in Colorado resident Patrick Mahaffy's backyard weren't the typical collection of weed whackers and shovels. Instead Mahaffy's yard hosted a collection of chipped stone knives and axes that date from the time of the Clovis people, who are believed to have been among the first inhabitants of America around 13,000 years ago.

"The idea that these Clovis-age tools essentially fell out of someone's yard in Boulder is astonishing," [anthropologist Douglas Bamforth] said. "But the evidence I've seen gives me no reason to believe the cache has been disturbed since the items were placed there for storage about 13,000 years ago" [LiveScience].

The prehistoric tool cache was turned up when landscapers were digging a hole for a fishpond in Mahaffy's backyard, and struck stone. The collection contains 83 knives, axes, and smaller pieces of flint, and a chemical analysis of blood residue left on the blades revealed that the tools had been used to butcher extinct types of North American camels and horses, and well as bears and sheep. Bamforth says the protein residue from the butchered animals suggests that the tools weren't buried as part of a ritual, but were instead tucked away for safekeeping.

"It looks like someone gathered together some of their most spectacular tools and other ordinary scraps of potentially useful material and stuck them all into a small hole in the ground, fully expecting to come back at a later date and retrieve them," Bamforth said [LiveScience].

The tools aren't notable merely for the unusual circumstances of their discovery, Bamforth says; they're also of great interest to researchers because only a scant handful of tools from that era have ever discovered in North America. Homeowner Mahaffy adds that the tools are also remarkable for their meticulous craftsmanship.

He said he was struck by the beauty of the tools and also how well designed they seemed to be. “They’re ergonomically perfect,” Mr. Mahaffy said. “They fit perfectly in your palm, and your fingers curl over just where they should” [The New York Times].

Related Content: 80beats: Once Humans Crossed the Bering Land Bridge to America, Where Did They Go? DISCOVER: The New Americans suggests that the Clovis had contemporaries in South America DISCOVER: Were the First Americans Wiped Out by an Asteroid? DISCOVER: Coming to AmericaImage: Glenn J. Asakawa/University of Colorado