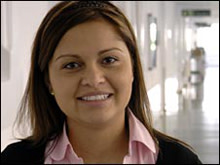 In a pioneering new treatment, doctors created a tailor-made new windpipe for a woman out of donor tissue and the woman's own stem cells, and say the new, transplanted trachea has been accepted by the woman's immune system as a natural part of her body without the use of powerful immune-suppressing drugs. Martin Birchall, one of the surgeons,

said the transplant showed “the very real potential for adult stem cells and tissue engineering to radically improve their ability to treat patients with serious diseases. We believe this success has proved that we are on the verge of a new age in surgical care” [The New York Times].

Similar treatments could soon be tried on transplants of other hollow organs, like the bowel, bladder, and reproductive tract, he said. The 30-year-old patient, Claudia Castillo, had failing airways and severe shortness of breath due to a bout with tuberculosis.

By March of this year, Castillo's condition had deteriorated to the point where she was unable to care for her children. Removing a lung was one treatment option, which would have allowed her to live, but seriously impaired her quality of life [Forbes.com].

She opted instead for this experimental treatment, in which doctors took a piece of trachea from an organ donor and transformed it into a structure that now appears native to her body. As described in the journal Lancet [subscription required], researchers

used strong chemicals and enzymes to wash away all of the cells from the donor trachea, leaving only a tissue scaffold made of the fibrous protein collagen [BBC News].

They then grew colonies of stem cells, taken from Castillo's bone marrow, and "seeded" the outside of the tissue scaffold with those cells, which began to grow into the cells that normally surround the windpipe. Four days after the seeding, surgeons grafted in the refurbished structure, replacing Castillo's damaged trachea. Researchers say the surgery was a complete success:

Castillo, who lives in Spain, had no complications from the surgery and left the hospital after 10 days. She is returning to normal activities and even called her doctors from a night club to say she had been out dancing all night, the researchers said [Reuters].

Castillo has not taken any immunosuppressant drugs, and doctors say the chance of her new windpipe being rejected is zero percent. The enthused surgeon Martin Birchall

said that in 20 years time, virtually any transplant organ could be made in this way. US scientists have already successfully implanted bladder patches grown in the laboratory from patients' own cells into people with bladder disease. The European research team ... is applying for funding to do windpipe and voice box transplants in cancer patients. Clinical trials could begin five years from now, they said [BBC News].