Do Chubby Babies Make for Chubby Toddlers and Overweight Adults? 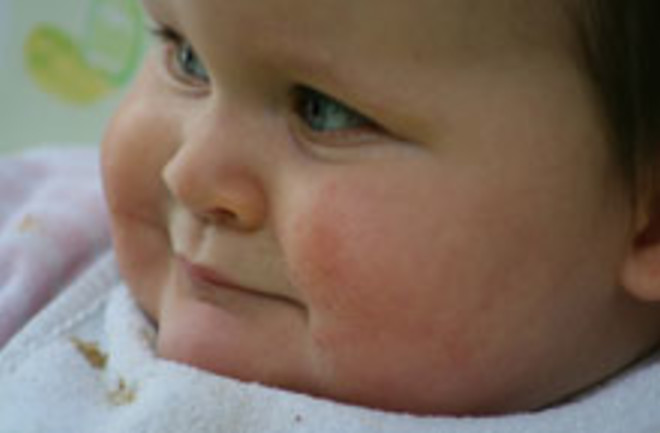 Most children shed their "baby fat." But researchers say that in more and more cases, chubby babies (which are about 30 percent of all babies) are primed for obesity later in life.

“We are certainly not saying that overweight babies are doomed to be obese adults,” study researcher Brian Moss, PhD, of Detroit’s Wayne State University tells WebMD. “But we did find some evidence that being overweight at 9 months of age is a predictor of being overweight or obese later in childhood.” [Web MD]

The study followed a group of 7,500 babies born in 2001, classifying them by their position on the baby growth chart as "at risk" (those falling in the 85th to 95th percentile weight group) or "obese" (the 95th and above percentile). When the babies were nine months old and again at the age of two years, the parents filled out surveys about their child's length and weight, their socioeconomic status, and race. The researchers found that 32 percent of the 9-month-olds were overweight, and 34 percent of the toddlers were. The study

was published in the American Journal of Health Promotion. The baby growth chart

was created with baby weights from 1963 to 1994, but now almost double the number of babies (30 instead of 15 percent) fall into the overweight group. The new study did find that children can move between weight categories during their early years: Some of the chubbiest 9-month-olds returned to a normal weight before their second birthdays, while some from the healthy weight category moved up to a heftier weight class.

“It means that in that age group weight is a lot more fluid than it is in an obese 14-year-old,” said Dr. Goutham Rao, clinical director of the Weight Management and Wellness Center at the Children’s Hospital of Pittsburgh at the University of Pittsburgh Medical Center. “And that means that these children are not necessarily condemned to be obese.” [msnbc.com]

Female babies and Asian/Pacific Islanders were at the least risk of being overweight, while Hispanics and children from low-income families were at higher risk.

The researchers aren't pushing for parents to put babies on "diets"; experts note that infants who are exclusively feeding on milk should never be denied breastfeeding or a bottle. But the study does indicate a need for educational campaigns about childhood nutrition, as just a small amount of extra-caloric food has a large impact on a small child's diet. Previous studies have shown that breastfeeding alone prevents obesity, but parents should also pay close attention to the solid foods they introduce their toddler to. For example, making sure that toddlers get enough fiber (by serving fruit instead of fruit juice) helps keep them at a healthy weight.

“You would be surprised at some of the foods and drinks kids are given,” Rao said. “You see a lot of very young children eating French fries, because that’s what their parents are eating. Sometimes you’ll even see parents putting regular soda into a baby’s bottle.” [msnbc.com]

Discoblog: Nutritionists to America: For the Love of God, Don’t Try the Twinkie Diet

DISCOVER: Is Overeating an Addiction?

DISCOVER: Child's Plague: Inside the Boom in Childhood Diabetes