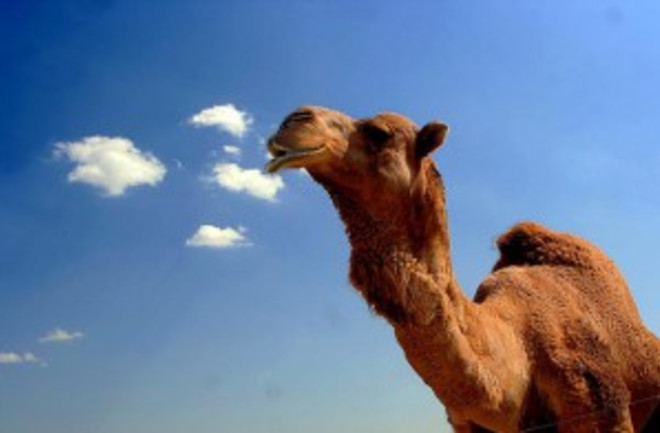 Photo: flickr/mr_angelouxWe know that methane from cow farts is a greenhouse gas and a contributor to global warming. But how about farts from camelids (camels, llamas, and alpacas), which have a similar type of digestive system? In this study, the researchers set out to measure methane emission by camelids. To do so, they built "respiration chambers" for the animals (5 alpacas, 6 llamas, and 5 camels) -- basically, sealed rooms that allowed the scientists to control and measure the air coming in and out. Then they waited for the camels/llamas/alpacas to fart. Turns out that camelids produce less methane overall than cows, probably due to their lower food intake. Still, the next time you're feeling bad about your job, just be glad it doesn't involve setting up camel fart chambers.Methane Emission by Camelids "Methane emissions from ruminant livestock have been intensively studied in order to reduce contribution to the greenhouse effect. Ruminants were found to produce more enteric methane than other mammalian herbivores. As camelids share some features of their digestive anatomy and physiology with ruminants, it has been proposed that they produce similar amounts of methane per unit of body mass. This is of special relevance for countrywide greenhouse gas budgets of countries that harbor large populations of camelids like Australia. However, hardly any quantitative methane emission measurements have been performed in camelids. In order to fill this gap, we carried out respiration chamber measurements with three camelid species (Vicugna pacos, Lama glama, Camelus bactrianus; n = 16 in total), all kept on a diet consisting of food produced from alfalfa only. The camelids produced less methane expressed on the basis of body mass (0.32±0.11 L kg−1 d−1) when compared to literature data on domestic ruminants fed on roughage diets (0.58±0.16 L kg−1 d−1). However, there was no significant difference between the two suborders when methane emission was expressed on the basis of digestible neutral detergent fiber intake (92.7±33.9 L kg−1 in camelids vs. 86.2±12.1 L kg−1 in ruminants). This implies that the pathways of methanogenesis forming part of the microbial digestion of fiber in the foregut are similar between the groups, and that the lower methane emission of camelids can be explained by their generally lower relative food intake. Our results suggest that the methane emission of Australia's feral camels corresponds only to 1 to 2% of the methane amount produced by the countries' domestic ruminants and that calculations of greenhouse gas budgets of countries with large camelid populations based on equations developed for ruminants are generally overestimating the actual levels." Related content: NCBI ROFL: When life gives you camels, make sausage.NCBI ROFL: Beans, beans, the musical fruit…To fart or not to fart: that is the question.