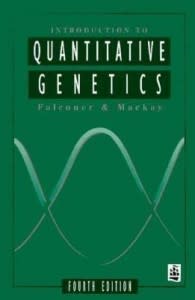 In response to comments and queries below I've been poking around for more experimental material on quantitative genetics, and in particular the breeder's equation. That's how I stumbled upon this very interesting and informative obituary of D. S. Falconer in Genetics. It reviews not only the biographical details of Falconer's life, but much of his science. It's free to all now, so I highly recommend it! (as well as Introduction to Quantitative Genetics, which is quite pricey right now, but just keep watching, I recall getting a relatively cheap copy of the 1996 edition) Curiously, quantitative genetics is rather unknown to the general public in comparison to the biophysical sexiness of molecular genetics, but in most ways it's the much better complement to the "folk genetics" which often crops up in our day to day life (e.g., "why is so-and-so's son so short when so-and-so is so tall"). DNA illuminates the discontinuities of Mendelian inheritance, often in the gloomy realm of disease, but quantitative genetics sheds light on the continuities and variations we see across the generations.