Gone are the days where all that was needed to make a cup of brewed coffee was an auto-drip machine and a paper filter. Coffee shops now have glass siphons lining the counter, looking as if they came straight from a chemistry lab. Baristas can be seen meticulously pouring water from a swan necked kettle into a ceramic funnel, which slowly drips coffee into a cup sitting on a scale. There is even a ready-to-serve cold brew option that was prepared the night before. These days, coffee shops seem to be stocked with new tools for brewing the delicious caffeinated beverage. With the resulting brews varying in flavor, why stick to just one method? Each apparatus has a different extraction process and requirements for grind coarseness, heat, and time.

A cup of coffee. Photo Credit: (Julius Schorzman/Wikimedia Commons) For all brewing methods, coffee must first be ground; then its soluble components must be dissolved in water, so they are released into the resulting brew. It is suggested to grind coffee right before brewing, since the process releases flavor as well as results in a higher perceptions of aromas; these aromas consist of highly volatile compounds which can evaporate into the air over time [1]. The grind level and particle size also play important roles in the taste of the final cup of coffee. If the grind is too fine, bitter coffee can result from over-extraction of chlorogenic acids; if the grind is too coarse, a weaker brew may result from the decreased surface area [2]. Coffee brewing is generally classified under three types: decoction, infusion or steeping, and pressure methods. Decoction: Siphon In decoction, ground coffee is in contact with high temperature water for a period of time, causing a more intense extraction [2]. Siphon, or vacuum brewed coffee, is an example of this method. Since many variables can be controlled, the coffee can be evenly extracted over a period of 45 seconds to 1 minute [3].

Siphon. Photo Credit: Janne Moren (JanneM/Flickr) A siphon consists of two glass chambers arranged vertically. Near boiling water is added to the bottom chamber with a heat source underneath. When the water is heated past its boiling point (212 °F or 100 °C), the heat source transfers energy to the water and produces vapor, or steam. Eventually, the pressure created from the gas exceeds that of the atmospheric pressure in the siphon. In order to create more room for itself in the bottom chamber, the gas forces the remaining liquid into the upper chamber. The coffee grounds are added at this point and stirred. The heat source maintains a constant pressure, keeping the brew in the upper chamber. Once the brew is complete, the heat source is removed and the water vapor condenses back into liquid form. Since liquid takes up less volume than gas in the bottom chamber, a negative pressure void is created that is then equalized by the brew flowing down [4]. Infusion/Steeping: Chemex An infusion involves steeping coffee in water before filtration, and creates a milder brew with more acidity [2]. An example is the Chemex, which is a funnel shaped apparatus with a pour over filter cone attached to a decanter. This is similar to a typical auto-drip coffeemaker where the coffee is steeped and dripped through a paper filter. However, the Chemex has some advantages, including control over water temperature, infusion time, and pouring technique. The filter used is also thicker, so the grounds are able to steep in the water and drip out more slowly. More flavor compounds are released, resulting in a clean tasting brew with “bright” and “high” notes [5]. 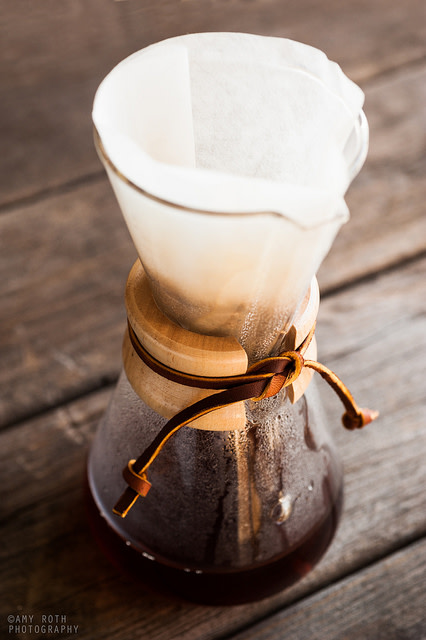 Chemex. Amy Roth (minimallyinvasivenj/Flickr) To prepare coffee with the Chemex, a medium to medium-coarse grind is placed on top of a pre-rinsed filter. Hot water is poured from a swan neck kettle (the narrow spout maximizes pour control) in a circular motion. As the first pour touches the coffee grounds, it degasses and carbon dioxide (CO2) is released, resulting in bubbles and puffed up grounds. This is called a “bloom,” and this process influences the flavor and aromas of the brew, including increased acidity if the bloom time proceeds for too long [6]. The reasoning behind this is that when CO2 reacts with water, it produces carbonic acid. Interestingly, lighter roasted coffee beans retain more CO2 than darker roasts [7]. CO2 (aq) + H2O (aq) « H2CO3 (aq) Once the gas is released, the water starts to dissolve the solubles in the coffee grind, which are responsible for many of the flavor components. As the brew starts to drip into the decanter, additional water is poured in the same circular motion to make sure that the grounds are constantly replenished with fresh water [6]. The grounds must always be immersed to maintain a constant temperature for the brew and to keep the chemical reactions going. This method also creates a strong osmotic pressure to extract the coffee concentrate from the grounds: since there are more coffee solutes in the grind and less in the watery environment, the solutes will want to escape through the semi-permeable cell membranes of the coffee beans. However, since water is continuously poured over the surface of the grounds, there is a possibility of over extraction from the top layer [7]. Pressure: Moka pot Unlike decoction and infusion, this method involves water being forced through grounds with high pressure and heat, similar to the style of espresso [2]. The Moka pot consists of a bottom chamber with water, a metal filter filled with ground coffee, and a screw-on upper chamber.

Moka pot during extraction process. Photo Credit: (RyAwesome/Flickr) Similar to the siphon, a heat source causes the water in the bottom chamber to form steam. However, instead of mixing the water with coffee for steeping, the water vapor pushes the water through the coffee grounds and the brew emerges out of the top portion as a gurgling sound is made. The bottom chamber is not filled all the way with water to ensure an air gap for pressure to form. In fact, in case the pressure in the bottom chamber gets too high, there is a safety valve on the lower chamber that lets the air out to keep the apparatus from exploding. With all of these different options, brewing coffee is now more of an art form than just a way to obtain caffeine. Whether you use a Moka pot at home or have a barista prepare a cup using a pour over method, you can be sure that each resulting brew will be far from tasting the same. References cited

Catherine Hu is pursuing her B.S. in Psychobiology at UCLA. When she is not writing about food science, she enjoys exploring the city and can often be found enduring long wait times to try new mouthwatering dishes. Read more by Catherine Hu