It's not just a myth. Slurping soup or sipping tea may have actual health benefits that help us heal. 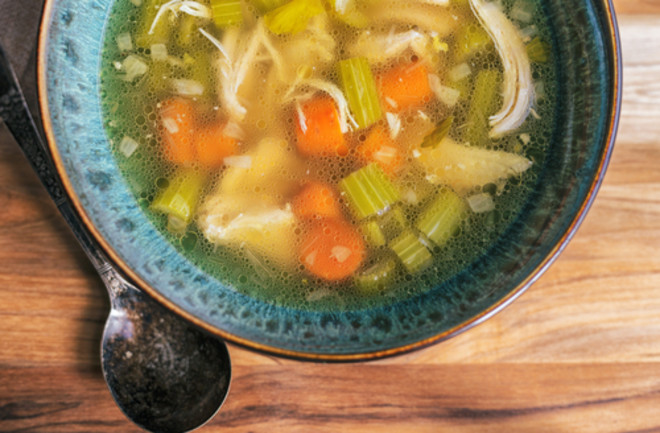 Few foods are as comforting as eating soup when you're recovering from a cold. Soup has been a commonly-prescribed remedy for respiratory illness since as early as the 12th century. And warm drinks, like tea, were used for healing in ancient and modern cultures alike.

We all have rituals to care for ourselves when we get the flu or a cold, but do warm liquids actually have an impact on the body’s ability to heal? As it turns out, certain drinks and soups may help lessen symptoms like congestion and could even boost the immune system to fight off an illness.

But even with the popularity of these edible remedies, scientific research isn't conclusive on exactly what our favorite foods and drinks do to heal us. However, a handful of studies show that our bodies can benefit from our favorite sick cures — or at least, it doesn't hurt to try them.

It’s not often that scientific studies include a recipe for chicken soup. But a report published in Chest nearly two decades ago has a step-by-step guide on how to make “Grandma’s soup,” as part of an experiment to determine if homemade and canned soups could have a healing impact on humans at a cellular level.

Researchers at the University of Nebraska gave soup to white blood cells in the lab to see if it would inhibit neutrophil migration — or cause the cells to slow their movement. The soup did indeed slow down the cells, signifying to researchers that such an effect in humans could help lessen inflammatory symptoms, like sore throats, associated with colds and flu.

They even compared several different brands of canned soups, with nearly every type (except chicken-flavored Ramen) able to slow down the cells to some degree. So, the researchers concluded, it's likely that a combination of ingredients in soup works together to create an anti-inflammatory effect.

That being said, store-bought soup does typically contain preservatives and high levels of sodium, and the longer ingredients sit, the more nutritional value they will lose. For those reasons, homemade chicken noodle soup is best, says Brad Bolling, an assistant professor of food science at the University of Wisconsin-Madison.  "Chicken and the vegetables in the soup have beneficial properties, depending on how you prepare them," he says. The key to proper preparation depends on the vegetable. Many vegetables can lose their nutrients when boiled for too long. When adding onions to chicken noodle soup, for example, add them toward the end to maintain as many nutrients as possible. For vegetables like carrots, however, nutrients become easier to absorb when they are cooked. You want your cold-fighting soup to have as many nutrients as possible.

In addition, chicken, when added to soup, releases an amino acid called cysteine. Cysteine thins out mucus in the nose and lungs and can help the body heal. This works in combination with soup's other benefits as well, such as helping hydrate the body.

The Healing Power of Tea

Besides slurping a warm bowl of soup, sipping tea might help boost healing, too. A 2018 meta-study published in Molecules, an open-access chemistry journal, analyzed several clinical studies on tea caetchins, or antioxidants, and their effects on colds and flu.

It is not understood, however, why gargling appears to ward off the flu. The authors write that it’s typically believed that flu bacteria enter the body through the nose, so it isn’t clear why an activity like gargling may help prevent the spread of those germs.

But if you’re sipping — or gargling — chamomile tea instead, the effects might be a bit different. “True” teas, like white, green, black and oolong, come from the Camellia sinensis plant. But herbal teas like mint, chamomile and rooibos do not. It's unclear if herbal teas have the same kind of benefits as the Camellia plant, but some herbs and roots are touted for their supposed ability to protect the body in other ways.

Since many of the tea studies reviewed in 2018 were small-scale trials, the researchers conclude that scientific evidence for tea’s healing properties are still in need of more data. But so far, science shows that our favorite cold and flu remedies likely do more good than harm.

Heat When You Have a Cold

If you’re drinking a warm cup of tea, it might do more good than the same beverage at room temperature, according to a 2008 study published in Rhinology.

The participants reported that the hot drink did help alleviate symptoms like runny nose, cough and sneezing — relief that the same drink, at room temperature, did not provide. The researchers did not have a conclusive explanation as to why the warm drink helped, and speculated that its effectiveness could be partially due to a placebo effect.

But another study shows that a hot beverage's effect on snot may be more than a placebo. A 1978 study published in Chest compared the nasal mucus velocity of 15 participants before and after they sipped hot water, hot chicken soup or cold water. Those who ingested the warm liquids were able to blow snot out of their noses quicker than the ones who drank cold water.

More From Discover
Mind
A Promising Treatment for Mental Disorders: Fecal Matter Transplants
Health
Breast Milk Alternatives Aren't a Modern Invention
Environment
Could Humans Grow Food During a Nuclear Winter?
Health
Why Do Humans Have a Taste For Alcohol?
Health
What to Feed Your Microbes
Health
Foods To Eat (And Avoid) If You’re Acne-Prone
Recommendations From Our Store
My Science ShopDiscover STEM Kits
My Science ShopDiscover 2022 Calendar
My Science ShopStrange Science
My Science ShopElements Flashcards
Shop Now
Stay Curious
Join
Our List