Arthritis sufferers swear by copper bracelets and creams. But the metal's real benefit is more than skin deep. 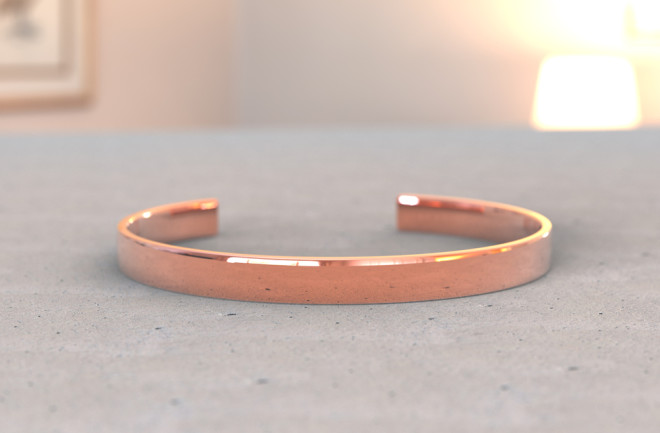 Copper was one of the first metals to be worked by humankind. Because it is highly malleable, copper could be used for toolmaking and ornamentation even by people whose everyday implements were of flint and bone. A copper pendant unearthed in what is today northern Iraq has been dated to 8,700 B.C. — the Neolithic period.

Although people have adorned themselves with copper since prehistory, the marketing of copper bracelets as a treatment for arthritis pain appears to date back only to the 1970s.

Proponents of copper bracelets often cite the research of Werner Hangarter (1904–1982), a German doctor of internal medicine. Hangarter evangelized for copper’s therapeutic possibilities after hearing that copper miners in Finland seldom developed rheumatism while laboring in the copper-rich environment of the mines. In the 1950s, he began treating patients suffering from a variety of rheumatic ailments — including rheumatoid arthritis (RA) — with injections of copper in a salicylic acid solution. The results were dramatic: patients showed “rapid and persistent remission of fever, alleviation of pain, [and] increased mobility.”

Hangarter published several papers on his work, and the alternative-medicine movement popularized his ideas. By the mid-1970s, copper jewelry was being touted as a natural, noninvasive remedy for the pain and inflammation of arthritis. The market now encompasses copper-infused topical creams, insoles for foot pain and compression sleeves with copper fibers for stiff joints. But is there anything to it?

Copper does play an important role in individual health. Like many other minerals, copper is an essential micronutrient, a key player in the formation of red blood cells; the most common symptom of a copper deficiency is anemia. It is found in many common foods, but shellfish, nuts and chocolate are the richest dietary sources.

Copper helps with formation of connective tissue, so it’s possible that a copper deficiency could worsen the symptoms of arthritis. It does not necessarily follow, though, that boosting copper levels can mitigate RA.

Hindsight reveals several problems in Hangarter’s research. Based on inference and anecdote, he assumed a chain of causation — that exposure to environmental copper helped miners ward off RA — where the reverse is actually far more likely: No active miners had RA because individuals who developed the condition quit the profession. His use of copper salicylate solution also raises more questions than it answers. Salicylic acid is the active ingredient in plain old aspirin, and the effects that Hangarter describes — pain relief and fever reduction — could easily be attributable to aspirin alone.

So even the effects of copper in solution are ambiguous: What about topical copper? The effectiveness of wearing copper, rather than ingesting it, is based on the idea that trace amounts of the metal can be effectively absorbed through the skin. But there’s little evidence for this claim, and in any case the occasional peanut-butter sandwich or chocolate bar would be a more efficient way to get the stuff into your system than a $25 bangle.

For the same reason, the superiority of copper-infused insoles or compression sleeves over some other material is unlikely. As for those creams, they’re made with a salicylic acid base — aspirin again, which as it turns out is easily absorbed through the skin. In all these cases, the product may ease discomfort from RA, but the addition of copper doesn’t make them any more (or any less) effective.

A 2013 study of 70 rheumatoid arthritis patients provides the most thorough debunking yet. Under double-blind conditions, patients who wore copper bracelets for five weeks saw no statistically significant reduction in pain or inflammation when compared to those who wore lookalike placebo bracelets. The rigor of the experimental design — inflammation was measured using a protein reactive blood test — provides convincing evidence that if you’re thinking of shelling out for an allegedly therapeutic copper bracelet, you’re better off saving your pennies.

More From Discover
Health
Is 'Expired' Milk Safe to Drink? Here's How to Know When to Throw Away Food
Health
What Science Says About the Weight-Loss Potential of The One-Meal-a-Day Diet
Health
Liquid Meal Replacements: Can We Move Beyond Food?
Health
Why Do Some People Live So Long?
Health
The Science Behind Fasting Diets
Health
Do 3,500 Calories Really Equal a Pound of Fat?
Recommendations From Our Store
My Science ShopDiscover STEM Kits
My Science ShopDiscover 2022 Calendar
My Science ShopStrange Science
My Science ShopElements Flashcards
Shop Now
Stay Curious
Join
Our List