Can a Pill Keep Your DNA Young?

The first drug targeting telomeres, now sold as a nutritional supplement, will soon face the harsh light of peer review. 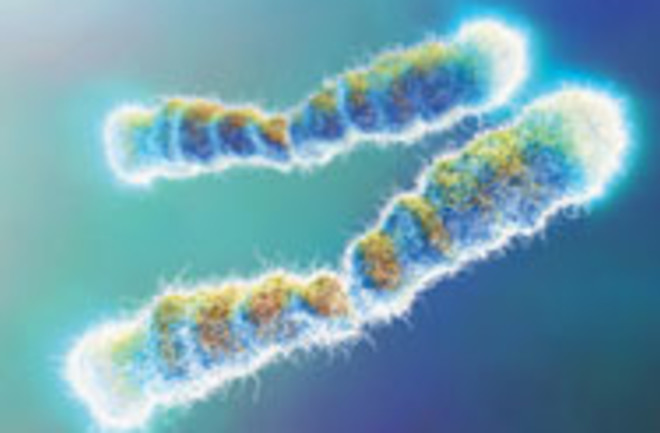 The tips of chromosomes could hold the key to youth. | Hybrid Medical/ Photo Researchers

Telomeres—repeating DNA sequences at the ends of chromosomes that become shorter with each cell division—have long tantalized biologists seeking to understand and control the aging process. When its telomeres become too short, a cell stops dividing and eventually dies. Stop that process and (just maybe) immortality beckons; hence the frenzy a decade ago when a group of researchers claimed they had figured out how to slow that winding-down. Now a second round of frenzy is under way. After years of research, the first telomere-targeting pills have hit the market, while other treatments are entering clinical trials.

An enzyme called telomerase maintains telomeres in our reproductive and stem cells but not in the rest of the body. In 2001 researchers at the biotech giant Geron Corporation isolated a molecule called TA-65 from the herb astragalus, which they said boosted telomerase activity (its effect has not yet been evaluated in published, peer-reviewed studies). Geron licensed the product to T.A. Sciences in New York City for development as a nutritional supplement; unlike medications, supplements require no FDA approval. A handful of physicians began selling TA-65 pills in 2007, and the company says that clients taking it have reported enhanced athletic, visual, and cognitive performance. To back up those claims, T.A. Sciences plans to submit research demonstrating TA-65’s effects on bone density, immune function, and age-related biomarkers for peer-reviewed publication this year. The results should help early adopters decide whether the supplement is worth its $8,000-per-year price tag. Sierra Sciences of Reno, Nevada, is also developing possible pharmaceuticals to maintain telomeres. “We now have 35 chemicals sitting in our lab that turn on the telomerase gene,” says CEO Bill Andrews. The company hopes to have an approved drug within 15 years.

Geron, meanwhile, is pursuing a separate telomere therapy aimed at fighting cancer. Although telomerase is not present in most cells, it gets reactivated in cancer cells, allowing them to continue dividing. Blocking the enzyme causes the cancerous cells to die, so the company is working with a telomerase inhibitor, imetelstat, that it hopes will kill tumor cells while leaving healthy ones unharmed. The compound is currently in Phase I clinical trials, with Phase II testing slated to begin this year. The unsettling flip side is that telomerase-boosting treatments aimed at slowing aging might also increase the risk of cancer. Some studies in mice have shown that elevated telomerase activity leaves the animals more susceptible to skin tumors and breast cancer, so maybe there is no free lunch.