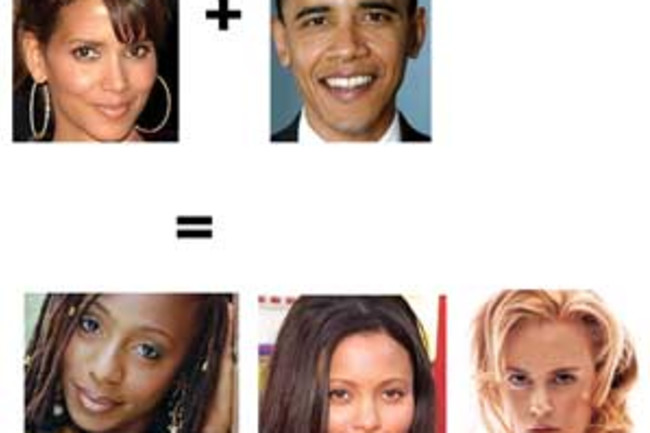 A commenter below sayeth:

I remember reading somewhere that a child can't be darker than the darker of his two parents and that in such instances the biological father is not the putative father. I have no idea if that's true or not.

This seems like a common sense assertion, but as I noted this is not really strictly correct in an apodictic sense. That is, just because you have a very dark skinned parent and a light skinned parent, it does not necessarily follow that the range of the offspring shall be bounded by the values of the parents. To some extent I can see how this makes sense; I believe it piggy-backs upon the blending intuitions about genetics which emerge out of innate folk biology, when in the case of complexion its discrete character is now well attested. But, it also bespeaks a specific empirical naivete, as anyone who is of South Asian or Brazilian background might attest to cases where offspring may express phenotypes outside of the ranges of both their parents. Consider height, one certainly knows cases where parents have offspring outside of the ranges of the heights of the parents! But the point I'm trying to make can be illustrated by concretely graphically. Consider two parents, one of European ancestry, and one of West African ancestry. As it happens between population variation in skin color is controlled by & large by about 6 genes. Many of these genes, e.g., SLC24A5, exhibit a disjoint frequency between the two populations. For example, on the aforementioned locus almost all Europeans carry the derived variant which is correlated with lighter complexion, while almost all Africans carry the ancestral variant which is correlated with darker complexion. The alleles seems to exhibit a rough codominance, so one can model them as additive an independent. In other words, heterozygotes (those who carry a "European" and "African" variant) exhibit a phenotype between the two parents. If you assume that a European (the lightest human population) and Africa (one of the darkest human populations) are disjoint for all the loci which control between population variation, then you have a case where all offspring are heterozygote:

(there are more matrix combinations than this, and this is really just a binomial distribution, so the expectation is obviously [by definition] more frequent than the edges of the distribution) As you can see some of the offspring exhibit the same complexion as the hybrid offspring. But, some of the offspring exhibit more extreme phenotypes than either parent. This is because heterozygotes produce homozygote offspring, as well as heterozygote offspring. This basic monogenic insight can be expanded to multiple loci, and the variance we see around the expectation is rather easy to model. Most offspring of brown-skinned parents will be brown-skinned, but some will be much lighter, and some much darker, than either parent. The comment above is a clear manifestation of the human intuition that genetics is analog, and that it operates by blending the essences of the two parents. If variance is constrained by parental variance, then naturally over time the variance would diminish to the point where no extant variance would remain for evolution to operative upon via natural selection. This was a major problem with Charles Darwin's original model, and before the insight of Mendelianism and discrete inheritance it had to be explained away via hand waving. No need today. We know the genetic architecture of many traits, including skin color, and the shape of human variation is easy to comprehend.Addendum: I'm ignoring environmental and epistatic components of variation, which might produce a different distribution than the one above, at least on the margins. Additionally, in terms of ascertaining paternity the real genetic architecture matters. The hybrids I used to illustrate why variance is maintained are "best case scenarios." There are genetic architectures where individuals could express the same phenotype in complexion as hybrids, but result in far less variance. I will leave that up to the readers to expand upon in the comments. Finally, the illustration above shows why

racial admixture will not lead to the uniform browning of the human race!