While the trippier fungi have stolen the show, several of their relatives are being investigated to treat common mental health conditions and neurodegenerative disorders. 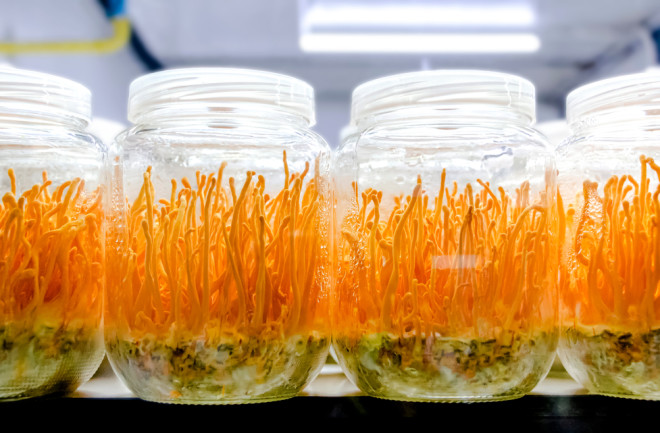 Psilocybin, a psychoactive compound found in some psychedelic species of fungi, has received a flood of attention in recent years for its potential in treating mental health conditions like anxiety, depression and PTSD. But it isn’t just trippy fungi that could deliver major brain benefits: Scientists are also looking into a host of other species that could help combat conditions affecting the mind, such as neurodegenerative disorders like Alzheimer’s and Parkinson’s disease and common mental illnesses.

Fungi have long attracted scientific inquiry. For starters, they're known to offer diverse, powerful collections of compounds called secondary metabolites that help them compete in the wild. These compounds have already provided us with a range of life-saving drugs, such as the antibiotic penicillin, the chemotherapy treatment Taxol, and the cholesterol medication Lovastatin.

Many types of fungi are sold in the U.S. as supplements in the form of ground powders. Lab experiments, meanwhile, typically extract biologically-active compounds using ethanol, certain enzymes or other agents that seem to boost their positive effects. And while recent epidemiological studies have identified a possible link between regularly eating mushrooms and a reduced risk of cognitive decline, researchers hope to incorporate the powerful fungi-derived compounds into more targeted treatments. Currently, the vast majority of studies have analyzed the effects of fungi extracts and certain isolated compounds on cells and rodents, along with relatively tiny samples of humans, so it’s far too early to make any conclusions.

Still, some results have nevertheless been encouraging. Here are some varieties that are currently being studied for their potential brain benefits:

While it’s one of the most popular edible mushrooms worldwide, you may not know that Lentinula edodes has also received attention in labs for its possible neurological applications. Shiitake are particularly prized for carbohydrates called polysaccharides, specifically beta-glucans, that are also found in the cell walls of various fungi. Beta-glucans offer a variety of possible advantages, including their ability to reduce inflammation, regulate the immune system and combat infections.

In recent years, scientists have found that beta-glucans can improve gut microbiome diversity in mice. This is a win for the brain, because the two are closely linked via a two-way communication channel called the gut-brain axis. In fact, feeding mice beta-glucans from Shiitake mushrooms helped counteract the cognitive impairments caused by a high-fat diet — which wreaks brain inflammation — a 2021 Journal of Translational Medicine study found.

The hairy-looking Hericium erinaceus, commonly referred to as lion's mane, is found in Asia, Europe and North America on decaying or dead trees. Research has indicated that it could help treat or prevent a wide range of conditions, including cancer, diabetes and high cholesterol. Among other medicinal mushrooms, this species has received particular attention for its potential neuroprotective properties. These may stem from chemical compounds that can promote cell growth, fight inflammation and regulate reward pathways within the brain.

Studies in mice and cells have accordingly suggested that lion’s mane may improve mental function in people with Alzheimer’s and help treat epilepsy. Small human trials suggest it could mitigate depression, improve sleep quality and alleviate early-stage cognitive decline, but researchers have called for more rigorous studies in people.

This parasitic genus of fungus is known to get gruesome. For example, the Ophiocordyceps unilateralis species can infiltrate the bodies of ants via spores and turn them into “zombies” before sprouting out of the insects’ heads. Fittingly, Cordyceps even inspired a zombie-themed horror video game series.

Despite their frightening behavior toward insects, humans have long prized these Cheeto-like fungi. Chinese medicine has used the Ophiocordyceps sinensis species to promote lung and kidney health since at least the 18th century. Natural forms of O. sinensis, which grow high in the Tibetan Plateau and Himalayas on ghost moths, can cost up to $63,000 a pound. Research teams therefore commonly study samples of this species that have been cultivated in labs.

In recent years, various varieties of Cordyceps have been studied for their anti-inflammatory, antitumor, immune system-regulating and neuroprotective properties, among others. Their various powers are thought to come from a unique compound called cordycepin, along with polysaccharides and sterols, which are somewhat similar to the cholesterol produced by humans. Experiments with animal models have demonstrated that the compounds within Cordyceps could help mitigate learning and memory impairment, symptoms associated with neurological diseases like Alzheimer’s and Parkinson’s disease. This could occur through various mechanisms, including cordycepin’s ability to prevent neuronal cell death.

The Inonotus obliquus fungus, commonly called chaga, typically grows as a parasite on birch trees in cold climates. It has long been incorporated in folk medicine in China, Korea, Japan and eastern Europe. And historical sources claim that 12th-century Kiev Prince Vladimir Monomakh used chaga to get rid of a lip tumor. As with the other fungi on this list, the polysaccharides within I. obliquus may offer a range of helpful properties, including antitumor, anti-fatigue, antioxidant, antiviral and anti-inflammatory effects.

So far, compounds isolated from chaga have been shown to protect against Alzheimer’s and Parkinson’s diseases in cell studies by mitigating oxidative stress, which can cause excess unstable molecules called free radicals to attack brain cells. While some medicinal fungi have received human trials, albeit tiny ones, chaga does not appear to have been tested in humans for any possible neurological benefits.

Known as the “Mushroom of Immortality” in Korea and China, reishi, or Ganoderma lucidum, sprouts up on dying or dead trees, including maple, elm and oak. In Chinese medicine, reishi is used to boost overall health and longevity. Like plenty of other sought-after fungi, reishi may get its magic from substances such as sterols, polysaccharides and peptides.

Reishi offers a laundry list of potential benefits, such as sedative, anti-inflammatory, antiviral, and antitumor effects. Evidence suggests that it could prove a helpful treatment for neurodegenerative conditions. Studies performed on cells and animals have highlighted the possibility that the polysaccharides from Ganoderma lucidum could, for example, slow the progression of Alzheimer’s disease. These substances may encourage neuron growth in the brain and alleviate cognitive decline.

Results in humans, however, haven’t been as promising. A first-of-its-kind experiment in just 42 people with Alzheimer’s disease found that spore powder made from G. lucidum failed to improve symptoms or enhance patients’ quality of life measurements, according to a 2018 Medicine study. But the authors noted that it was a brief treatment period (six weeks) and small sample size.

If future research succeeds (and plenty more is needed), this mushroom could perhaps compete with widely prescribed antidepressants. Reishi extracts seemed to exhibit an effect comparable to that of the SSRI fluoxetine in studies from 2017 and 2021 performed on mice. Its relative Ganoderma applanatum might also help ease depression and anxiety, according to another mouse experiment.

Beyond that, a small study in 64 women with fibromyalgia failed to find statistically significant effects of Ganoderma lucidum supplementation on subjective measures like feelings of happiness, depression and life satisfaction. But researchers did notice a positive trend in these outcomes post-treatment, as reported in the journal Healthcare in 2020. And in a 2011 study assessing reishi’s effect on fatigue in breast cancer patients, subjects reported reduced anxiety and depression.