Base X: The Isle of Anthrax

Requisitioned from farmers, blitzed with anthrax-laden bombs in the 1940s, and made inhospitable to human and animal life for decades, the tiny Scottish island of Gruinard now serves as home to a flock of healthy sheep and a disreputable monument to the birth of biological warfare. The research conducted at Gruinard during the second World War was the very first of its kind, providing proof of concept of a natural microorganism that could be massively weaponized to inflict environmental damage and human fatalities. 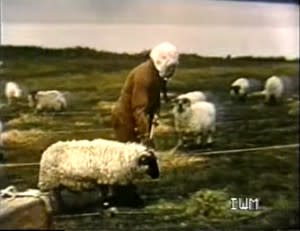 A still from declassified footage of the anthrax trials conducted on Gruinard island in the 1940s. Here a man leads sheep recently exposed to anthrax to a staked line for observation. Footage courtesy of the Imperial War Museum. Click for source. In the mid-1930s, a British journalist alleged that Germany had been secretly testing biological agents in the London Underground and the Paris Metro.(1) It caused an international sensation. Given Germany’s success at developing mustard gas in the first World War and their subsequent discoveries of deadly nerve agents in the 1930s, British intelligence feared that Germany was more than capable of developing biological weapons to be used in future conflicts. In response, the British War Office tasked the chemical warfare team located at Porton Down in the 1940s to quickly assemble a new team to explore the potentials and limitations of biological weapons for the purposes of both defense and attack.(2) Anthrax, a hardy soil-dwelling bacteria that can cause fatal infections, would be the test weapon of choice. Long known to infect sheep and cattle, Bacillus anthracis most commonly causes infections in agricultural communities among shepherds and goatherds and is notable for an array of different disease presentations depending on its point of entry into the body. The most benign presentation, cutaneous anthrax, is caused by spores infecting small lesions on the face, neck, or extremities and is characterized by black painless ulcers. When inhaled, anthrax spores causes a rapidly progressive pneumonia resulting in hemorrhaging lungs and a swift death. This presentation has long been known as “wool sorter’s disease,” as workers sorting wool and hair would inadvertently rustle up and inhale airborne spores. Not content with these already impressive methods of infection, infection can also occur when meat contaminated with anthrax spores is ingested, and sepsis may result as the bacteria are carried to the lymph nodes are thence distributed widely into the blood.Though we have long recognized anthrax as a highly infectious organism capable of causing a devastating and often fatal infection, whether it could be weaponized or not was unknown. Could an organism of the soil be molded into an implement of war? Could the spores be incorporated into a bomb, survive the detonation, be appropriately aerosolized, and subsequently infect humans? A test of proof was needed. And a safe site for experimentation. Gruinard is a blip of an island, a mere 0.76 square miles, located in the northwest of Scotland just over half a mile from the shoreline. It was once sparsely inhabited in the late 1880s - a census counted six residents - but since the 1920s it largely served as an empty pasture for shepherds who would ferry their flock over via a ten-minute boat ride for some pastoral grazing.(3) Small, uninhabited, and conveniently located near the Allied military base at Loch Ewe, it appeared to be the perfect location for lethal experiments with explosives and deadly pathogens. In 1942, the island was commandeered and christened with a new name: Base X.(4) Flocks of sheep would be the biological targets of the anthrax trials. 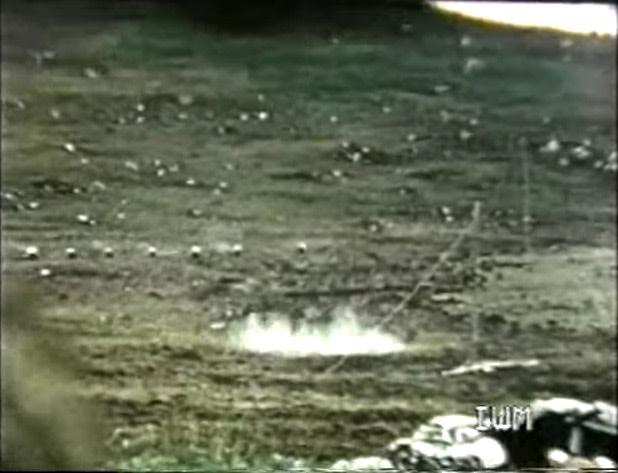 A cloud visualized after a detonation from declassified footage of the anthrax trials. Footage courtesy of the Imperial War Museum. Click for source. For two years, Gruinard and its flocks of sheep were bombed with anthrax. Mustard gas containers were filled with a brown slurry consisting of billions of anthrax spores and detonated from elevated platforms and, in one trial, dropped from an aircraft.(5) Downwind of the explosions, sheep were individually enclosed in “exposure crates,” clothed in fabric to keep spores off the fleece and prevent cutaneous infection, and, following the detonation, tethered on lines separated from one another to prevent further transmission and ensure that subsequent anthrax infection was caused only by direct inhalation of the spores released in the explosions.(6)The experiments were a resounding success. Within three days of the first experiment in which a bomb had been detonated from an elevated platform, all 60 sheep exposed perished from inhalational anthrax. This pattern was commonly repeated over the course of two years, and the trials determined that large numbers of anthrax spores could be effectively dispersed in aerosolized clouds, remaining both viable and virulent. A summary report at the end of the experiments concluded that similar anthrax weapons would make cities inhospitable for “generations” of humans, a triumph of weapons “more potent than any of a like size.”(2)(7)At the conclusion of the trials, an estimated 4 x 10^14 spores had been detonated at the island, and Gruinard was so thoroughly drenched in anthrax that it remained forbidden to the public for nearly half a century.(8) Annually from 1948 to 1968, the government dispatched scientists to the island to sample the soil, persistently finding that it was heavily contaminated and would likely remain that way until at least 2050.(9) For decades, warning signs posted along the coast cautioned both man and beast against venturing to an island that remained “under experiment.”(1)Two bioterrorism stunts seem to have prompted the British Ministry of Defence to reconsider the status quo of Gruinard island. In 1981, a package was discovered on the property of the Chemical Defense Establishment at Porton Down filled with soil reportedly sourced from the island.(10) A group calling themselves “Dark Harvest” released a press statement declaring that two microbiologists had retrieved 300 pounds of Gruinard soil, a portion of which had been packaged and delivered to Portion Down in an attempt to return “the seeds of death” in protest of the experiments and the island’s uninhabitable state. Testing of the packaged soil found that it did indeed contain anthrax and that the soil appeared similar to samples from Gruinard. Four days later, a second package of apparent Gruinard soil was discovered at a meeting of the ruling Conservative Party, though the sample did not contain any anthrax. 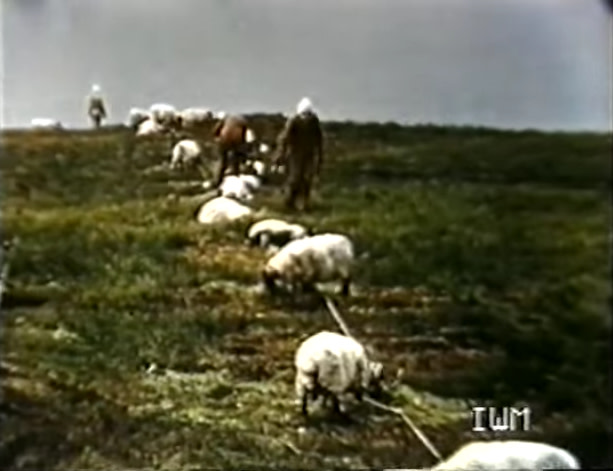 Sheep began dying from inhalational anthrax within three days of exposure. In this still from declassified footage, a line of tethered sheep can be seen with a few carcasses. Footage courtesy of the Imperial War Museum. Click for source. A subsequent investigation by the government into the extent of anthrax contamination at Gruinard found that the spores were circumscribed to a hot spot of about 7.4 acres in the southern part of the island.(9) In 1986, the government proceeded with decontaminating the spit of land. Foliage was hosed with a weed killer solution and then burnt. A toxic solution of 280 tons of formaldehyde diluted in 2000 tons of seawater was concocted and then drenched over the island’s soil using 30 miles of drip hoses.(7) The topsoil was then extracted and sealed away in containers, dispatched to a still-unknown location. A year later, the soil was seeded with grass and a flock of 40 sheep were dispatched to graze the entire island for five months without any incident or ovine infection.(5) In a show of good faith, a junior Defense Minister, Michael Neubert, ventured to Gruinard on April 24th, 1990 to remove its warning signs and publicly declare the island safe.(7) (The government may have been hedging their bets by delegating a junior staff member as the face of this chancy mission.) Today, Gruinard is visited by shepherds and hunters, no longer an incipient experiment in the potentials of biological warfare. Anthrax was once an organism of unlucky accident, a bug that randomly killed herding animals or unlucky men and women working in the livestock industry. The experiments at Gruinard transformed this organism of incidental death into an organism of war, the first time “a bacteriological weapon had been tried out on the full scale.”(11) It also radically changed the natural environment of an island, delineating an area unsafe for human visitation much like the sites of other weapon testing, such as the Manhattan project’s nuclear testing in New Mexico only a few years later. The tiny Scottish island represents one of the earliest chapters in the history of mass biological warfare, of mankind’s deliberate tinkering with nature's well-stocked armory.Resources You can watch declassified footage of the Gruinard anthrax trials on Youtube courtesy of the Imperial War Museum Film and Video Archive. Check out Blood & Fog: The Military’s Germ Warfare Tests in San Francisco to find out more about the United Stages govenrment testing biological weapons in the San Francisco bay. References 1) FM Szasz. (1995) The Impact of World War II on the Land: Gruinard Island, Scotland, and Trinity Site, New Mexico as Case Studies . Environmental History Review. 19(4): 15-30 2) EA Willis (2009) Landscape with Dead Sheep: What They Did to Gruinard Island. Medicine, Conflict and Survival. 25(4): 320-331 3) H Haswell-Smith (2004). The Scottish Islands. Edinburgh: Canongate. 4) CBS Staff (10/29/2001) Tourist Temptation: Anthrax Island. CBS News. Accessed onlineon 03/03/2017 at http://www.cbsnews.com/news/tourist-temptation-anthrax-island/ 03/03/2017 5) RJ Manchee et al. (1994) Formaldehyde Solution Effectively Inactivates Spores of Bacillus anthracis on the Scottish Island of Gruinard. Applied and Environmental Microbiology. 60(11): 4167-71 6) experimentsrus (02/09/2014) Gruinard island X-base anthrax trials 1942-43' [Video file]. Accessed online on 03/18/2017 at https://www.youtube.com/watch?v=6Mykjxkwwe0 7) BBC News Staff (7/25/2001) Britain's 'Anthrax Island'. BBC News. Accessed online on 03/02/2017 at http://news.bbc.co.uk/2/hi/uk_news/scotland/1457035.stm 8) FM LaForce. (1994) Anthrax. Clinical Infectious Diseases. 19(6): 1009-1013 9) BMJ Staff. (1990) For Anthrax Isle The Chemical War Is Finally Over . British Medical Journal, 300(6729: 895 10) WS Carus (2002) Bioterrorism and Biocrimes: The Illicit Use of Biological Agents Since 1900. Fredonia, NY: Fredonia Books 11) DH Avery (2013) Pathogens for War: Biological Weapons, Canadian Life Scientists, and North American Biodefence. Toronto, Canada: University of Toronto Press