And the Nobel Prize for Medicine Goes to... 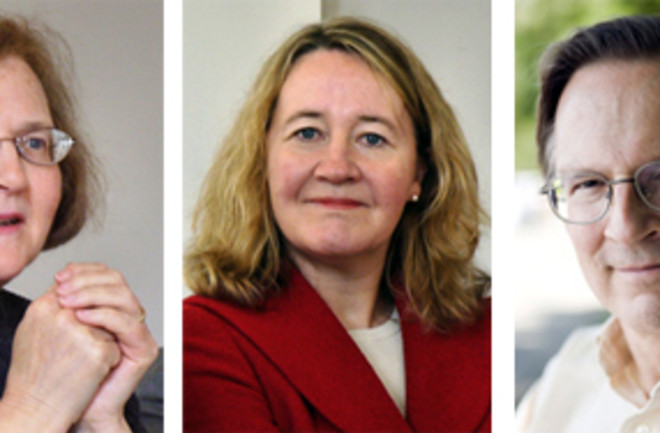 The Nobel Prize for medicine has been awarded to three U.S. researchers who probed the mechanism of cellular division, and whose work opened new avenues both in the fight against cancer and attempts to slow aging. The prize will be shared by Australia-born Elizabeth Blackburn, Carol Greider, and London-born Jack Szostak. The three researchers

solved the mystery of how chromosomes, the rod-like structures that carry DNA, protect themselves from degrading when cells divide. The Nobel citation said the laureates found the solution in the ends of the chromosomes -- features called telomeres that are often compared to the plastic tips at the end of shoe laces that keep those laces from unraveling [AP].

The enzyme that builds telomeres, called telomerase, has been called the "immortality enzyme" because it allows cells to divide perpetually without dying. Researchers now believe that cancer cells use telomerase to sustain their uncontrolled growth, and several drug companies have begun testing cancer treatments that target the enzyme. But telomerase doesn't have to be a bad thing: Some researchers are investigating ways to activate the enzyme in aging cells to prevent natural degeneration. It may one day be possible, these researchers say, to make old skin new again, or to repair aging and faltering hearts. This is the week for Nobel Prize announcements: The physics prize will be announced tomorrow, and the chemistry award will be handed out on Wednesday. Related Content: DISCOVER: Scientist of the Year Notable: Elizabeth Blackburn DISCOVER: Immortal Cells asks if we can stop aging on the cellular level 80beats: Nobel Prize for Medicine Awarded to Virus HuntersImages: Gerbil, Harvard Medical School