All of Us Releases First 100,000 Genomes to Address a Lack of Medical Diversity

Along with citizen scientists, the landmark NIH project is working to make medicine more diverse. 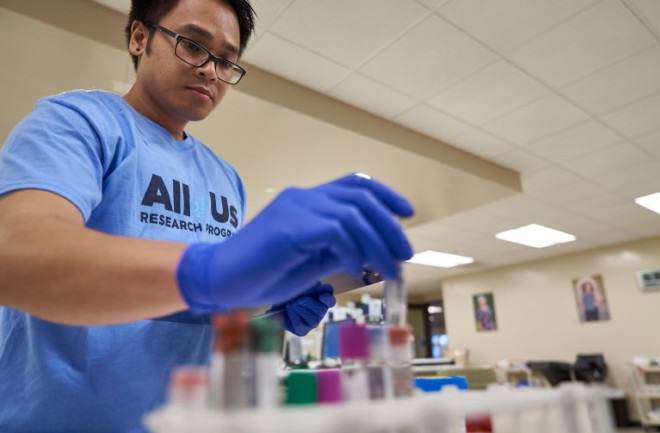 With the release of its first 100,000 genomes, all from volunteers, the All of Us project is on its way to solving one of the most pernicious problems in modern medicine: a startling lack of diversity.

The National Institutes of Health project, which launched in 2018, will eventually gather genetic information and other medical data from one million Americans. Key to the effort is a focus on getting this data from Americans who truly represent the country’s diversity. Up until now, most of the genetic information we have — and most medical information, period — has come from studies of white men. That’s left gaping holes in our knowledge about the human body, with consequences for anyone who’s not a white man.

“Until now, over 90 percent of participants from large genomics studies have been of European descent. The lack of diversity in research has hindered scientific discovery,” said Josh Denny, chief executive officer of the All of Us Research Program, in a statement.

Now, All of Us has made whole-genome sequences from a diverse group of 100,000 Americans available to researchers studying things like Alzheimer’s, cancer, aging and much more. It’s an important milestone that comes thanks to the efforts of citizen scientists across the country, who have graciously signed up to donate their medical information in the hopes of creating a more equitable system of research in the U.S.

If you’re interested in taking part, it’s not too late! With hundreds of thousands of genome sequences to go, All of Us is still hoping to enroll new participants. To learn more, sign up for one of several All of Us events featured during Citizen Science Month this April.

Learn more about this and other participatory research projects on a special microsite at SciStarter.org/NLM. All of Us and the Network of the National Library of Medicine (NNLM) provide support to Arizona State University and SciStarter.org for Citizen Science Month, happening all of April.

The genome of every human on Earth looks almost exactly the same. But small genetic differences mean some people are shorter or taller, or have brown or blue eyes. The same goes for our health: Some people might be predisposed to conditions like heart disease or diabetes, or could have rare genetic mutations that cause health issues.

Up until recently, most studies that tied genetic differences to medical conditions relied almost exclusively on data from people who were white and male. That means our library of genetic knowledge is missing critical information on genetic differences in other populations that could hold the key to medical breakthroughs, especially for conditions that disproportionately affect minority groups. These disparities add up to real impact. One study estimates that eliminating racial and ethnic health disparities would have reduced total medical costs between 2003 and 2005 by more than $1.2 trillion.

To address the problem, All of Us is casting a much wider net and reaching out to Americans across the country who better reflect the country’s demographics. Already, 329,000 people have taken the initial steps to participate, more than half of them from racial or ethnic minority groups. All told, 80 percent of the participants come from groups that have been historically left out of medical research. Genetic data gets paired with medical records, survey data, Fitbit information and more to help researchers more fully understand any number of health conditions.

Participants can also elect to get genetic ancestry and health-related insights based on their DNA from the project. For instance, they might learn about their risk for hereditary diseases, or potential medication interactions affected by their genetics.

You can learn more about the project at the regular events All of Us holds to share insights from the project. Upcoming events during Citizen Science Month, for example, focus on data literacy and how that applies to the project. You can hear speakers from the project share how All of Us is committed to the inclusion of women participants and researchers, or learn about how to look at and interpret the data the project generates.

The new genomes are available for researchers to use through the Researcher’s Workbench, an online interface for accessing data from the project. All the genomes and medical data have been de-identified to protect people’s privacy, and researchers must first be vetted before securing access to the project’s data. There are currently more than 1,200 projects underway using All of Us data, including research into eye disease, pancreatic cancer, vitiligo and many other conditions.

Anyone can check out high-level data from the project using the Data Browser tool on the All of Us website. You can find information on different conditions, medical procedures, medication use and insights into genetic variants there.

If you’re interested in exploring other citizen science projects that study health or medicine (or anything else!), check out SciStarter’s Project Finder. You can search by topic, date, location and more. And don’t forget, April is Citizen Science Month! We’re celebrating citizen science with special events and activities all month long. Find events and join in the fun on citizensciencemonth.org!