We age in a variety of ways, both inside and out — here’s what we know about what happens in your golden years. 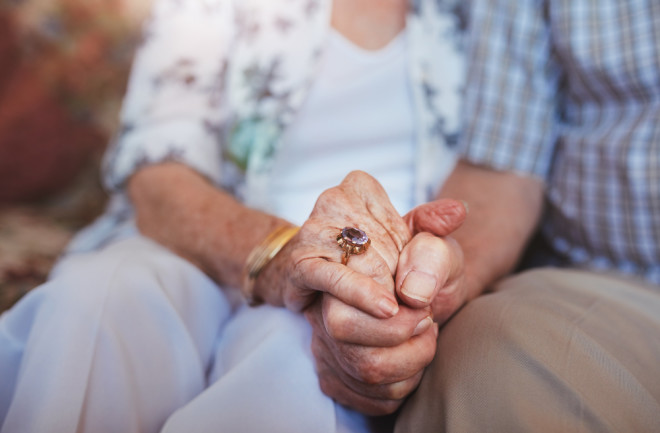 My mother lived past the century mark. In fact, she died one week past her 101st birthday. But she didn’t end up as one of those mentally and physically robust centenarians that researchers love to study. By the time she died, my mom was frail and nearly bedridden. Dementia twisted her mind, osteoarthritis crushed her right knee, and then her heart gave out.

Even with health issues, her attitude stayed strong. She loved to dance, and she was a badass in the gym, well into her nineties. No matter what happened to her body — she also survived two bouts of breast cancer — her young outlook kept my mother smiling, even when she was weak and in hospice.

Every organism ages — even bacteria. Why aging happens, however, is still one of the biggest mysteries in biology. Researchers have come up with many theories about why we age, but here’s the most common explanation: Damage starts in our cells from early life exposure to everything from environmental toxins to pathogens, poor nutrition and even lifestyle choices like smoking. As decades pass, impaired cells weaken tissues and organs, which turn sparks decline across the body.

Biologically, we age at different rates; some of us age faster or slower than others, and our chronological age (how long we’ve actually been around) can be out of synch with our biological age. To measure these differences, researchers developed molecular clocks, blood tests that track markers on our DNA. These estimates can tell us how much aging has occurred up to a particular point in time, predict lifespan and whether those years will be healthy. Another blood test measure tells us how fast or slow we are aging. This knowledge can anticipate who is most at risk of age-related disease, such as heart disease, and tell researchers whether interventions work or not.

Some people at age 75 are athletic and independent, while others may need help with daily living. But aging is more than the changes our cells accumulate over time, or the gradual buildup of molecular damage. We also age mentally, and our attitudes matter. How we view aging can help or harm our own health, and impact how we as a society views aging, and those views affect us all. “Aging is not just about living longer; we want healthier aging,” says Alaattin Kaya, a researcher specializing in cellular aging and longevity Virginia Commonwealth University in Richmond.

"The more we understand about aging, the more the public will understand, and the more we will see support for aging,” says Patricia M. D'Antonio, vice president of policy & professional affairs at the The Gerontological Society of America in Washington, DC. “We are not falling off a cliff because our society is aging.”

The Whys and Hows of Aging

Our risks of heart disease, cancer, and diabetes bumps up over time. The new field of geroscience aims to figure out why by focusing on the basic mechanisms behind aging: how aging impacts disease, and how disease impacts aging from a molecular and genetic level. Studying aging is complicated, says D'Antonio, because most people end up with multiple, chronic conditions late in life.

My mother was in pretty good shape until her 100th birthday. Not long after, she got pneumonia. Doctors said it was mild, but she was sick enough to spend a few days in the hospital. She never regained her former strength, and her chair-bound life spiraled into frailty, one of the physical signs of aging. Experts call this functional aging, which marks how fast we can walk, how many times we get up and down from a chair. She also lost resilience, another molecular marker of aging.

In general, biological aging reflects changes that happen in our cells, blood chemistry and organ function also changes over time, says Daniel Belsky, a genetic epidemiologist at the Columbia University Mailman School of Public Health. Nailing down our biological age and our rate of aging can help predict someone's life expectancy, and whether those years will be healthy.

Belsky and a team of researchers crafted a molecular tool that measures the pace of aging. This tool can tell you whether you are aging faster or slower compared to a calculated norm. They based the algorithm on data collected at multiple time points over the years, from 1000 babies born in 1972 in Dunedin, New Zealand. The measurement is more like a speedometer than a clock, says Belsky.  This tool has also been tested in a clinical trial that studied caloric restriction. In that study, the algorithm was able to show that the treatment group had a slower pace of aging.

Although these tools give researchers a way to measure such interventions, they’re still in the early phases. “We are closer to the beginning than we are to the end of the development of these biomarkers,” says Belsky

Our attitudes can also impact how we age. These biases start when we’re young, says D'Antonio. Negative attitudes towards aging are found everywhere you look, from birthday cards to commercials to sitcoms.

Age bias can turn us against older people, so we blame them for their health issues, such as type 2 diabetes, says D’Antonio. People will say, “If you had only eaten well, you wouldn’t have all of these problems now,” she says. These attitudes don’t take into account that people may live out their lives in areas with no grocery stores or even sidewalks. Working three jobs just to survive financially may not leave time for exercise.

D’Antonio is leading the Reframing Aging project, an effort to shift public understanding on aging, but changing attitudes will take a generation of work, she says.

Beyond that, our own perceptions of aging can affect our behavior, and in turn our health. If we think of ourselves as too old for a particular activity, for example, that can make us disengage and become sedentary. Or constant stress over aging can take their own physical and mental toll, too. “Beliefs play an important role in what we do and how we feel about what we’re doing,” says Lindsay Ryan, an associate research scientist at the University of Michigan, Ann Arbor.

But research also shows health benefits among people with positive self-perceptions towards aging. Plus, it’s normal to have both negative and positive self-perceptions about getting older, says Ryan. “Older adults may be faced with health decline and social losses, but can still find satisfaction and meaning in their relationships and activities.”

My mother experienced both sides of that double-edged sword. She stayed strong until she couldn’t. At age 90, she was healthy enough for a knee replacement, but chose to opt out of the surgery — and that’s the type of choice we should all have. While I may not live to see my 100th birthday, I hope for the mental and physical strength to age as my mother did.

This article was written with the support of a journalism fellowship from The Gerontological Society of America, The Journalists Network on Generations and the John A. Hartford Foundation.