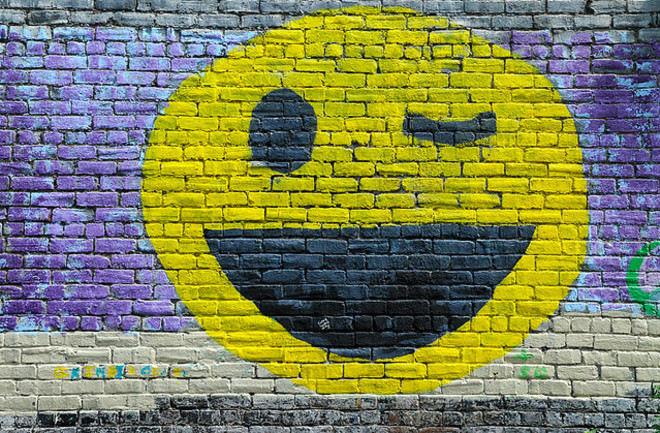 We already know that sarcasm is hard to communicate via email. Well, according to this study, it turns out that warmth is as well. People often use smiley face emoticons in their emails as a way to convey humor and lightheartedness, but these researchers found that it doesn't quite work the way we'd like: "Contrary to actual smiles, smileys do not increase perceptions of warmth and actually decrease perceptions of competence." Perhaps because emoticons in general are seen as childish or unprofessional? Clearly the answer is more gifs! ;)

The Dark Side of a Smiley: Effects of Smiling Emoticons on Virtual First Impressions "First impressions are heavily influenced by emotional expressions such as smiles. In face-to-face contact, smiling individuals are perceived as warmer and as more competent than nonsmiling individuals. In computer-mediated communication, which is primarily text-based, the “smiley” (☺) constitutes the digital representation of a smile. But is a smiley a suitable replacement for a smile? We conducted three experiments to examine the impact of smiley use on virtual first impressions in work-related contexts. Our findings provide first-time evidence that, contrary to actual smiles, smileys do not increase perceptions of warmth and actually decrease perceptions of competence. Perceptions of low competence in turn undermined information sharing. The adverse effects of smiley use are moderated by the formality of the social context and mediated by perceptions of message appropriateness. These results indicate that a smiley is not a smile. The findings have implications for theorizing on the social functionality of virtual emotional expressions." Related content: Flashback Friday: What’s the real difference between what men and women post on Facebook?Flashback Friday: Surprise surprise, sarcasm is hard to communicate via email.Babies manipulate their moms for maximum smiles.