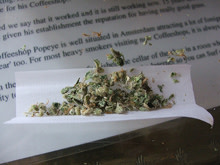 Contrary to conventional wisdom, marijuana may actually fight memory loss, scientists report—but only if taken in small doses amounting to just one puff a day. Researchers tested a compound similar to THC, the main psychoactive substance in marijuana, on rats and found that the chemical reduces inflammation in the brain and promotes the growth of new brain cells. Elderly rats given the compound performed better on learning and memory tasks.

"Could people smoke marijuana to prevent Alzheimer's disease if the disease is in their family? said [researcher Gary Wenk]. "We're not saying that, but it might actually work" [Telegraph].

In one part of the study, researchers injected the THC-mimicking drug, called WIN-55212-2, into young rats with inflammation in their brains. The drug reduced inflammation. In a second part, the researchers injected WIN into older rats that were then put into a swimming tank with hidden resting spots. The medicated rats were better able to find and remember the resting spots. Dissection of the rat brains revealed not only reduced inflammation but the growth of new neurons. The results were presented at last week's Society of Neuroscience meeting. Although the research is far from human trials, the researchers suggest a legal drug similar to WIN could be used to prevent Alzheimer's disease, which causes chronic inflammation in the brain. The synthetic drug appears to activate three types of neuro-receptors also targeted by THC. However, there are clear differences between WIN and marijuana. Most notably, since WIN lacks other ingredients found in marijuana, it does not produce the same high.

While marijuana might also promote the growth of new brain cells, it doesn't have WIN's ability to block another brain receptor that appears to cause inflammation, a key difference between the two compounds, psychologist Yannick Marchalant said. [Bloomberg.com].

"Everyone is aware that smoking too much marijuana impairs memory," said Marchalant. "Our work stays on the safe side — doses that we know are not going to impair memory, but improved it" [Wired Science]. He explained that such a drug would not be effective on the young, whose brains are still forming, or on the old, who are already experiencing the effects of Alzheimer's. "It's too late,'' he said. "Patients who have been diagnosed have already lost neurons.'' A preventive strategy would need to start years earlier, he said [Bloomberg.com].

HealthYes, CBD Creams Relieve Pain. But Science is Still Learning About the Benefits and Risks
Recommendations From Our Store