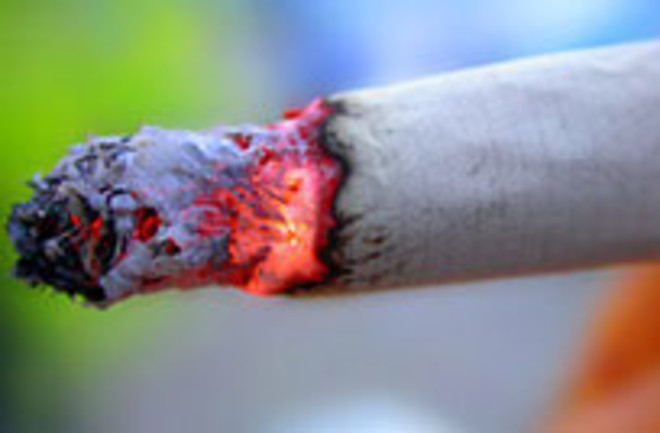 British researchers have found that giving nicotine to lab rats boosts their concentration and memory, and say that the findings could point the way towards pharmaceuticals that could treat the symptoms of Alzheimer's and dementia. This benefit may be linked to the effect nicotine has on addicted smokers:

The "boost" in concentration that smokers experience from cigarettes could help sufferers fight the mental decline associated with dementia, studies suggest [Telegraph].

Researchers are definitely not suggesting that elderly people take up smoking or start wearing nicotine patches in an attempt to ward off dementia, as the negative health effects would far outweigh any benefits.

Lead researcher Professor Ian Stolerman said: "Nicotine, like many other drugs, has multiple effects, some of which are harmful, whereas others may be beneficial. It may be possible for medicinal chemists to devise compounds that provide some of the beneficial effects of nicotine while cutting out the toxic effects" [BBC News].

In the study, which will be presented today at a neuroscience conference in Geneva, researchers found that rats injected with nicotine were more likely to complete tasks correctly than a control group while researchers tried to distract them with flashing lights and sounds.

Efforts are already underway to translate these results into human terms.

Drugs based upon the chemical structure of nicotine are already in phase 2 trials to see whether they can forestall the mental decline of Alzheimer's patients [The Times]. But researchers caution that there's no evidence that nicotine decreases the risk of getting dementia, only that it may help treat the symptoms and give patients a few extra months of lucidity.

What Data Science Can Tell Us About Our Dreams

More From Discover
The Sciences
The Truth About Truth Serum
Health
What Does Full FDA Approval of a Vaccine Do If It’s Already Authorized for Emergency Use?
Health
Strange Symptoms After Heart Surgery Exposed a Teen's Secret Struggle
Health
Can You Overdose on Marijuana?
Health
Ibogaine: The Psychedelic Drug That Could Fight Addiction
Health
The Other Magic Mushroom: Why a Canadian Startup Is Suddenly Interested in the Fungus From Super Mario
Recommendations From Our Store
My Science ShopDiscover STEM Kits
My Science ShopDiscover 2022 Calendar
My Science ShopStrange Science
My Science ShopElements Flashcards
Shop Now
Stay Curious
Join
Our List