A High-Powered Attorney Suffers From Memory Loss and Slips Into a Coma. What's Going on?

Anne was at the peak of success. But when this 50-something started to experience confusion and memory loss, it didn’t take long for everything to come crashing down. 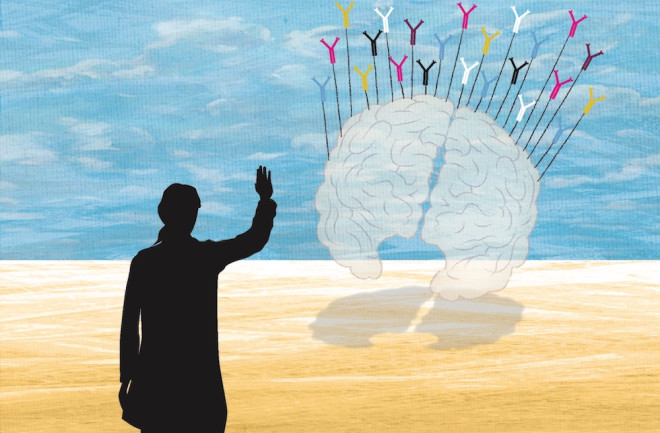 This article appeared in the March/April issue of Discover magazine as "Bye-Bye, Brain." Subscribe for more stories like these.

Anne was in the prime of her career — a trial lawyer working as a partner for a major law firm in Cincinnati — when she began to lose her mind. A fitness enthusiast, Anne was only 50 when she realized something was amiss.

“The first thing I noticed was that my hands would begin to shake while I was sitting at my desk,” she recalls. Perplexed, she went to see a neurologist at the Cleveland Clinic, who referred her for CT and MRI scans; both came back normal. She was given a diagnosis of essential tremor disorder, a progressive but not life-threatening condition.

But within months, new symptoms began to appear: brain fog, memory loss, problems with reading and understanding even the simplest sentences. The work she had excelled at throughout her career quickly became impossible, and she would spend her days sitting staring vacantly into space. Looking back, she remembers feeling as if her brain were being slowly switched off.

“My mind was just very groggy and gray,” she says. “I’d been at the top of the class all my life, getting full scholarships to school, and all of a sudden I couldn’t read a map. It was horrible. I couldn’t find words [or] remember anything. My husband said that often I’d just sit and zone out.”

Soon, she began having seizures. After one particular incident, Anne was rushed to the hospital, where she remained in a coma for two days. Neurologists at the Cleveland Clinic initially suspected she had had a stroke. But they were left perplexed when all scans appeared normal. Desperate to find out what was wrong, her husband called one of her cousins, a surgeon at the Mayo Clinic. The cousin arranged for them to see Robert Brown, a neurologist who specializes in treating stroke patients.

By the time she reached the clinic in Rochester, Minnesota, Anne was gravely ill and unable to even feed herself. “I remember it vividly,” says Brown. “When I saw her, it was quickly apparent that she had far more going on than a stroke. It was a progressive neurological disorder. She had tremors, seizures, cognitive impairment, issues with coordination and speech.”

At that point, she’d been told no treatments were available — and she should get her affairs in order.

As Brown and colleagues raced to identify the cause of this mysterious illness, Anne’s condition continued to deteriorate. A priest was summoned to give her the last rites. But as that ceremony was taking place, Brown made a surprising discovery: The levels of antibodies in Anne’s blood and spinal fluid were extremely high, a detail previously overlooked when doctors thought she had suffered a stroke. This suggested that her condition was being caused by a malfunctioning immune system, and the symptoms could potentially be reversed with steroid treatment.

“Her MRI scan was essentially normal, but there were these various signs of autoimmunity,” he says. “So we started with steroid therapy, which led to a rather striking improvement.” Just a month after starting therapy, says Brown, Anne’s cognition became remarkably clearer. She was able to think and respond, her tremors were nearly gone, and she told her doctors that all her symptoms had started to melt away.

Over the coming weeks, and several doses of IV steroids later, Anne was able to walk, talk and eat by herself again. It turned out that she had autoimmune dementia, a type of dementia so little known that, at the time, few neurologists on the planet had even heard of it.

But over the past decade, interest in this condition has soared. To date, out of more than 200 different subtypes of dementia, it is one of the only forms that can be completely cured.

Autoimmune dementia is characterized by symptoms like memory loss and confusion — similar to symptoms of more common dementias such as Alzheimer’s and vascular dementia. While most dementias are caused by a progressive, neurodegenerative disease, autoimmune dementia occurs when antibodies, generated by an overactive immune response to stress or infection, mistakenly bind to neuronal proteins in the brain. As a result, the disease progression tends to be much faster, with patients also experiencing more unusual symptoms, such as seizures.

The condition was first diagnosed in the 1960s by British neurologist Walter Russell Brain. He noticed that a number of people suffering from an autoimmune disease that attacked their thyroids also had memory loss and cognitive decline. Brain found that many of them improved with steroid treatment.

But, nearly 60 years later, autoimmune dementia still remains underrecognized. Some neurologists believe that a small proportion of people in nursing homes who have the condition are mistaken for people with incurable dementia. The fact that they can be successfully treated means identifying them is vital.

Over the past 15 years, researchers at Mayo and a handful of clinics in the U.K. and Spain have begun working on developing more precise diagnostics for autoimmune dementia. These are based on identifying certain neuronal antibodies associated with the disease; recognizing these types eventually helped neurologists pinpoint the cause of Anne’s illness. Physicians who suspect that someone might have autoimmune dementia can refer them to specialist clinics to receive one of these tests.

A Slow Road Back

Research is still ongoing into the best treatment regiments for autoimmune dementia patients. Like many others, Anne kept relapsing even after several rounds of steroids, before she was given an experimental treatment called intravenous immunoglobulin — infusions of blood plasma from healthy donors. These infusions helped neutralize the disease-causing antibodies. Eventually, she recovered enough to return to work.

“I went back to a small law firm at first, so I didn’t have the pressure, and then I went to work at a major corporation, and I’ve had no problems at all,” Anne says. “Now, more than 10 years on, they say I’m cured.”

For Brown, it remains one of the most remarkable cases of his career as a neurologist. “I remember it so vividly,” he says. “It was such a remarkable improvement when you consider how ominous things looked at one stage.”

All in all, the entire ordeal lasted two years. Of that time, Anne remembers very little. Much of her knowledge of what happened comes from her husband, her daughter, or the doctors who treated her. “There are large gaps of it missing,” she says. “It’s like that whole couple of years are gone, or are very fragmented in my mind.”

The experience did help Anne reevaluate many of her life choices, though. When she returned to the legal world, she made a conscious decision to no longer work on major trials, noting that she often used to work 80 hours a week before the illness struck. But looking back, she is still bewildered at just how rapidly her life fell apart. “People who meet me today think I’m your average working attorney,” she says. “They have no idea. It’s a truly miraculous story. I literally went from having one foot in the grave to being totally fine again.”