A Common Gum Infection Bacteria May Also be Causing Alzheimer’s 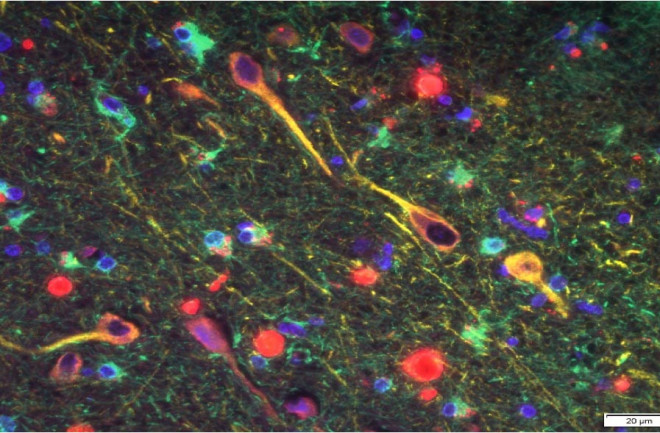 In a new study out Wednesday, scientists reveal yet another reason to keep up on dental hygiene. Bacteria that cause a common yet largely preventable gum infection may also play a role in Alzheimer’s disease. The discovery also offers hope for a treatment that could slow neurodegeneration.

“There were many clues in the [features of Alzheimer’s disease] that an infection is at work,” said Casey Lynch, an entrepreneur and co-founder of Cortexyme, a biotech company headquartered at the Verily Life Sciences campus in South San Francisco, who led the new research. “Many of the genetic risk factors for Alzheimer’s are related to immune system function,” she added, which suggests “immune system dysfunction might put people more at risk.”

Alzheimer’s disease, an irreversible and progressive brain disorder that leads to memory loss and diminished thinking skills, affects at least 5 million Americans. Clumps of a brain protein known as amyloid plaques are a hallmark sign of the disease. Billions of research dollars have gone towards finding a treatment that destroys these mind-robbing masses. But there’s still no cure.

“Not enough people are asking what is upstream of the plaques … and [brain] inflammation,” said Lynch, who has a background in Alzheimer’s research and was frustrated by the string of failed therapies for the disease.

Nearly six years ago, Lynch received a call from Stephen Dominy, a psychiatrist at the University of California, San Francisco, who had studied the link between HIV and dementia.

“I think I’ve found a bacterial cause of Alzheimer’s,” Dominy, who co-founded Cortexyme with Lynch and now serves as the company’s Chief Scientific Officer, told her. Dominy had spent about 15 years searching for infections that might lead to Alzheimer’s until evidence for a bacterium known as P. gingivalis became “undeniable,” according to Lynch. P. gingivalis causes periodontitis, an infection that destroys the gums and can lead to tooth loss.

When the team examined the brains and cerebrospinal fluid of Alzheimer’s patients, they found DNA from the bacterium. They also discovered bacterial enzymes called gingipains that destroy brain cells were present, too.

And when they watched P. gingivalis infections play out in mice, it triggered neurodegeneration in the hippocampus, a brain structure central to memory. It also led to Alzheimer’s hallmark amyloid beta plaque production and inflammation, the researchers discovered.

The scientists then designed and created a new molecule that blocks the gingipain enzymes. The antibiotic reduced the amount of bacteria in infected mice and stopped the formation of amyloid beta plaques while reducing inflammation, the team reports Wednesday in the journal Science Advances.

A treatment using the compound, called COR388, recently passed human safety studies in Alzheimer’s disease patients and healthy adults and will move into the next step of clinical trials this year, Lynch said.

More From Discover
Health
This is How Much Water You Should Actually Be Drinking Each Day
Health
What is Epilepsy and What Should We Know About it?
Health
A Blood Test That Screens For Multiple Cancers At Once Promises To Boost Early Detection
Health
Decorate For the Holidays Early and it Might Improve Your Mood
Health
Feeling Sleepy After a Thanksgiving Meal? It Might Not Be the Turkey
Health
The Surprising History of the Bidet Started with the Wealthy and Brothels
Recommendations From Our Store
My Science ShopDiscover STEM Kits
My Science ShopDiscover 2022 Calendar
My Science ShopStrange Science
My Science ShopElements Flashcards
Shop Now
Stay Curious
Join
Our List