10 Medical Advances That Will Shape the Future of Healthcare

These methods and machines are making the future of medicine far brighter. 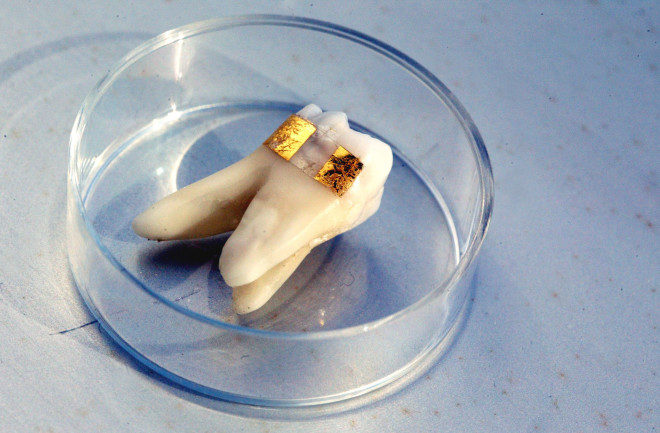 The “tooth tattoo,” developed by researchers at Princeton, is a wireless chemical sensor that can detect bacteria and could be used as an early warning system against infection. (Credit: Frank Wojciechowski/Rex Features/Associated Press)

A Crowd and a Source

Crowdsourcing’s basic premise, that individual knowledge can never match collective wisdom, applies to diagnostic medicine as well. Well-trained physicians and other health professionals typically diagnose health conditions. But some things confound even the experts, and even the experts confound some things.

Imagine a future where diagnoses are made or confirmed by a cast of thousands. It’s starting right now: If you have an unsolved medical case, you can submit your symptoms to the crowd-sourced CrowdMed website.

Scores of “Medical Detectives” track incoming cases and, if they feel they can offer insight, they’ll jump in to try and make or confirm the diagnoses. If a detective makes the right call, he or she may get a cash reward. The successful detective gets to keep the reward or donate it to a charity that funds treatment for patients in need. The patient uses the diagnosis to seek treatment.

Submitting a case is free and confidential. Becoming a Medical Detective is also free, and you don’t need to be a physician to make diagnoses or earn rewards — just have good medical instincts. Detectives with verified health credentials can also join an expert review board, for which patients pay a fee to use. For more information, visit crowdmed.com.

The Power in Empower

The community was founded in 2004 by three MIT engineers, two of whom are brothers who have a third brother with Lou Gehrig’s disease. That difficult-to-treat condition led to the inspiration for the community, which now provides support to patients with more than 2,000 different conditions.

The site tracks every approach used by community members, assigns each a result — including positive or negative aspects — and shares those results with medical organizations and health providers to help them improve their delivery of care.

Forget Sherlock; It’s All About Watson

Watson is the real stickler for data, data, data — but not the Arthur Conan Doyle character. Instead, it’s the IBM supercomputer getting buzz for such flashy feats as winning rounds on Jeopardy!

But it also has a far more serious purpose than impressing Alex Trebek. Watson is what’s called a cognitive system. When used in a health care setting, that means doctors can speak in a natural voice to it about a patient’s symptoms, then watch as the supercomputer goes to work mining all available patient data, and related medical research and clinical findings from around the world.

After it sifts its terabytes, the computer suggests diagnoses and treatments. IBM says the goal for Watson is to exceed the diagnostic success rate of mere mortals — where, in the U.S., approximately 1 in 5 diagnoses are wrong or incomplete, and about 1.5 million people are injured by medication errors each year.

Bones by Design, Organs on Demand

The rapidly evolving field of 3-D printing is just out of its infancy, but it’s already having a huge impact on medicine. These printers have CAD-like abilities and can spray almost any material, including biomaterials, through specialized nozzles to build incredibly complex three-dimensional objects.

Imagine diseased, damaged or missing body parts becoming a thing of the past — it’s already happening. Metal jawbones and hips are among the first replacement bones to be made on a 3-D printer. Further, Massachusetts General Hospital researchers have grown an artificial ear from animal tissue and are working on doing the same with human tissue.

Livers. Kidneys. Bladders. These and more are in various stages of 3-D development, which is huge news to the 18 or so people who die every day — that’s 6,500 annually — in the U.S. alone while waiting for a traditional organ transplant.

That’s Dr. Siri to You

If your idea of a righteous smartphone app is Candy Crush Saga, Instagram or Pandora Radio, you’re missing out on one of the most impressive areas of health care innovation.

Apps either available now or in advanced development are remaking the ability of smartphones to ally with you and your doctor to keep you in the pink. In 2012, to pick a recent example, the FDA cleared an iPhone app that lets your doctor take a remote EKG just about anywhere there’s a suitable connection.

Others currently on the market help radiologists decipher medical images and let people track suspicious moles for signs of unwanted change. One app, called CellScope, takes a picture of your child’s inner ear, shoots it over to your family doctor, and lets her decide whether your child is screaming about an ear infection or an annoying sibling. If there’s no infection, you and your child avoid an unnecessary trip to the doctor’s office and pharmacy.

Straight From the Horse’s Mouth

Your doctor isn’t sure what your particular symptoms mean. Soon, she’ll be able to reach for a slew of sensors to give her an insider’s view of what’s going on. Called biohackers, these sensors will be either sewn into your clothing or implanted in your body.

One in advanced development is a sensor embedded in a tooth that measures irregular jaw movements, toxic inhalants, how often you’re coughing, and what harmful junk you’re eating and drinking. Others are still in the tinkering stage: internal GPS units that can lead hikers to safety and medical treatment; bandages that change color or squeak if they’re too tight or loose; and socks that record temperature and heart rate during exercise.

Others will report on your sleep patterns, hydration levels, urine composition, stress hormones and almost anything else that can be measured. The goal, say most researchers working in this field, is to help you take steps before a problem arises, or quickly diagnosis it when one does.

Millions of pacemakers in millions of chests run out of juice every seven years and need to be replaced. Technology being developed at the University of Arizona and the University of Illinois will enable them, and other implanted devices, to harness electricity from the beating heart itself. Think of it as your own thoracic turbine.

Researchers are creating nanogenerators that convert the mechanical energy of a heartbeat into electrical energy. Not only will these internal power plants provide electricity, they’ll also eventually become sophisticated enough to troubleshoot any problems in the device they’re powering and, in some cases, even fix them.

From the Mean Streets to the Cancer Clinic

Breathalyzers are world champions when it comes to testing the breath of boozy drivers, but now they’re almost ready for a new role in the medical community: diagnosing cancer.

In ongoing trials at Georgia Tech, a $100 Breathalyzer-style device has been detecting lung and breast cancer in patients with up to 80 percent accuracy. The new device samples as many as 75 different volatile compounds characteristic of these cancers to reach or confirm a diagnosis.

The first benefit of this approach is in its cost-savings: A biopsy procedure costs up to $5,000. A PET scan can rack up $4,000 in bills. The second, more important benefit, is the potential for an earlier diagnosis for lung cancer. The Georgia Tech researchers note that when lung cancer is caught in Stage 1, which is the earliest stage, it has a 70 percent cure rate. Most lung cancers, however, aren’t caught until Stage 3, when symptoms become more obvious. The cure rate at that point, however, plummets to less than 25 percent.

If this device holds up in larger human trials as well as it did in its early testing phase, expect to see it as an option right in your own doctor’s office within a few years.

A Return to the Glory Days of Antibiotics

Few people alive today can fully appreciate the earthshaking importance of Alexander Fleming’s 1928 discovery of penicillin. Countless lives have been saved from that antibiotic and the numerous others that followed.

Fast-forward over 80 years and we find ourselves in the highly dangerous position of many bacteria becoming resistant to the current slate of antibiotics, with at least 2 million Americans getting an antibiotic-resistant infection each year, some 23,000 of them fatal. This has been made worse by a decades-long dry spell in the development of uniquely new antibiotic drugs.

That’s about to change: With no fewer than a dozen novel antibiotics in clinical trials, this new generation of drugs works in fascinating ways. Some are simply better versions of the older flame-throwing antibiotics, which kill almost every kind of bacterium in their path. Most do this by adding silver to existing antibiotics, a move that gives them enhanced strength.

But others, colloquially called antibiotic smart bombs, are much more elegant. They’re designed to target and destroy specific strains of bad bacteria that actually cause disease in humans. This approach has the added benefit of leaving unharmed most of the other benign or beneficial bugs that normally reside in your body.

What good are advances in medical treatment if you don’t have access to the medical facilities that provide them? That’s the idea behind a Chinese initiative to use shipping containers to create a kind of hospital in a box.

Each hospital is made up of 10 shipping containers, with rooms for clinics, pharmacies, operating theaters, diagnostic equipment and public health services.

The containers can be configured and equipped for each individual location and local need at a fraction of the $17 million it takes to build a small three-story hospital in the U.S.

Although the first container hospitals are designated for several countries in Africa, the idea is applicable worldwide — in any rural community where the closest health care facility is too distant to be convenient, even accessible.