A new kind of movement takes the quake out of earthquake

In May of 1960, the largest earthquake ever recorded struck the coast of Chile with a force felt around the globe. The magnitude 9.5 temblor flattened villages, unleashed landslides, triggered a volcanic eruption, and launched tsunamis that ravaged shorelines in Hawaii, Japan, the Philippines, New Zealand, and California. Geologists could spend their entire careers reconstructing the seismic dynamics of the event. But in the past few years, they've become more interested in the calm before the terrestrial storm.

Fifteen to 20 minutes prior to the upheaval, a deep slip along an offshore fault occurred that didn't cause any shaking at all on the surface. Such movements, which last from minutes to years, are called slow, or silent, earthquakes, and only the most sensitive instruments can detect them. With technical advances such as GPS, slow earthquakes are now being detected at other infamous faults. They're providing clues to the makeup and behavior of deep-earth terrain that have long puzzled geologists. And they also hold out tantalizing prospects for forecasting earthquakes.

"These subtle motions imply that something is happening at depth. They were totally unexpected," says Herb Dragert, a research scientist at the Geological Survey of Canada in Sidney, British Columbia, who recently described a silent earthquake in the Pacific Northwest.

Slow earthquakes suggest that the causes of regular quakes can go much deeper than anyone had previously suspected. The worst earthquakes happen on subduction zones, seams in the earth's surface where one piece of crust dives beneath another. The movement is driven by the relentless heat of the underlying mantle, which pushes the plates around. During subduction, the solid rock that tops tectonic plates can get locked. Then, as the lower part of the subducting slab continues to slide down, stress builds on the locked parts until the crust cracks and shifts to release the strain. The rupture takes just seconds and creates shock waves that spread rapidly from the site of the failing fault. It's those big, fast seismic waves that do the damage. 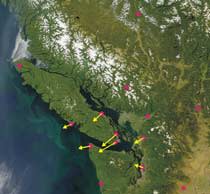 GPS monitoring stations (in pink) around Puget Sound in the Pacific Northwest have detected points (yellow arrows) where the ground shifted westward in the summer of 1999. Photograph from Orbimage/NASA.

"If you have a major earthquake, and the earth moves a few feet, you don't need GPS to tell you," says Dragert.

The existence of slow earthquakes implies that less conspicuous shifts miles below the surface may bring locked crusts to their breaking point. But those deep disturbances are much harder to detect. In the days before GPS, Selwyn Sacks of the Carnegie Institution of Washington, D.C., found some of the earliest evidence for slow earthquakes using data from buried sensors called strain meters, which measure compression and expansion of surface rock. The strain meters surrounded the so-called Nankai trough, where the Philippine Sea plate subducts under southwest Japan. Sacks showed that in the hours following a 1978 quake off the coast, the culpable plates continued to slip past each other by as much as three feet—minus the usual bad vibes on the surface. The silent rupture traveled along the fault line onto land, where it skewed the structure of a greenhouse without breaking any glass.

In 1989 Sacks's Carnegie colleague Alan Linde reviewed elevation changes in the Chilean shoreline that had resulted from the 1960 quake. He reasoned that he could estimate the total amount and location of the movement that had occurred in the underlying fault by examining patterns of submerged trees and exposed shoals. Linde confirmed that the silent slip must have happened far beneath the solid crust in which regular earthquakes are produced. "You had to have a slip extending down at least 180 miles along the plane of the fault," he says. "What that says is: When the slow slip takes place, it adds to the stress in the [overlying] seismogenic zone and probably triggers the large earthquake."

Before slow earthquakes were discovered, geologists assumed that the lower part of a subducting plate moves smoothly into the deep earth without any resistance. "We used to think it was so damn hot down there that you couldn't accumulate stress," says Dragert. Instead, it seems the heated rock sticks and slips much like the crust, except at a more stately pace. Slow slips tug on the crust more gently than an earthquake. They trigger a low-frequency seismic pulse that makes no shock waves at all, only faint, transient displacements at the surface. Even early GPS monitors, which sampled a given site once every year or two, couldn't pick up those signals.

"From those data, there wasn't any evidence that the motion was anything other than steady," says geophysicist Wayne Thatcher of the U.S. Geological Survey in Menlo Park, California.

The surprising stickiness of the slow-earthquake zone could help geologists define the pressures, temperatures, and minerals that exist in Earth's mantle, says George Zandt, a seismologist at the University of Arizona at Tucson. And as more slow quakes are detected in populous regions near Mexico City and the San Andreas Fault, geologists wonder if they will ever be of use in predicting conventional earthquakes. "Nobody really knows the answer," says Linde. A 15-minute warning may not have helped much in the case of the Chilean earthquake, he concedes.

And it's now clear that slow earthquakes can happen before or after seismic activity—even, as Dragert puts it, "in splendid isolation" from it.

Last spring, a team at Central Washington University in Ellensburg announced that eight quakes have silently struck the Pacific Northwest since 1992. The analysis relies on GPS stations from Seattle to Vancouver Island, where the coastal crust gets compressed about a quarter-inch a year as an oceanic plate plunges inland. Every 14 months or so, the GPS data show, the crust springs back a bit toward the sea, indicating a slow release of strain in the plate's viscous nether regions. The recoil takes two to four weeks. If it happened all at once, the movement would generate earthquakes with magnitudes as high as 6.7.

Like Linde, Dragert thinks the slow quakes add to the stress in the locked zone of the crust, increasing the likelihood of a major temblor. But the faults in the Pacific Northwest aren't as active as the ones in Japan or Chile, and big earthquakes are known to visit the area only once every 600 years, on average. The last one occurred in 1700. Thus it seems unlikely, Dragert says, that a single silent event—even with a magnitude 6.7 wallop—will push the plates over the edge anytime soon. A few hundred years from now, on the other hand, a single, slow earthquake probably will. "We're better off knowing when these little jerks occur," he says.

"What we really need, to understand their value for earthquake prediction, is to be able to collect data systematically over long periods of time and in many different places," adds Thatcher. He and his colleagues may soon get that capability. If Congress gives the green light, a dense network of GPS stations and strain meters called the Plate Boundary Observatory will soon blanket most of the seismically active American West, transmitting continuous streams of data on the intimate lives of fault zones and volcanoes.

"We've never had the resources or capability to listen to the earth so sensitively," says Thatcher. "And the earth itself will tell us, in the end, whether we'll ever be able to predict earthquakes."