Look out Oregon, here comes another one

The 10,000-foot peaks in western Oregon known as the Three Sisters were once a flat stretch of real estate. Then the ground began to tremble and bulge, and the first in a long series of volcanic eruptions spewed ash and debris as far south as California and out into the Pacific Ocean. Such eruptions have been building the Sisters from lava and cinders for about 700,000 years. The last one occurred 2,000 years ago, at South Sister; it's been pretty quiet ever since.

These days all the action is west of the Three Sisters Range in a wilderness area distinguished only by its formidable mosquitoes. There the Earth's crust is heaving up in a bull's-eye pattern 10 miles wide. At its center is a four-inch rise, a veritable molehill compared with the nearby mountains. But geologists think it could be the start of something big: the birth of another volcano.

"We really don't know what to make of it yet," says Charles Wicks of the U.S. Geological Survey in Menlo Park, California, whose team found the uplift last May by comparing satellite images taken in 1996 and 2000. Wicks and his peers believe the Oregon event may provide the first opportunity to track a volcanic eruption from its inception, long before the smoke and pyrotechnics begin.

The uplift was most likely caused by a sudden influx of molten rock more than four miles below the surface, says Wicks. That thick, liquid rock, called magma, melts deep within the Earth and then floats upward into fissures in the Earth's crust, where it pools in underground reservoirs called magma chambers. When the pressure in a chamber gets high enough, the magma pushes through existing cracks in the Earth's surface or creates new ones. The eruptions can be slow and deliberate or sudden and catastrophic; both kinds have occurred countless times in the turbulent past of the Three Sisters Range. 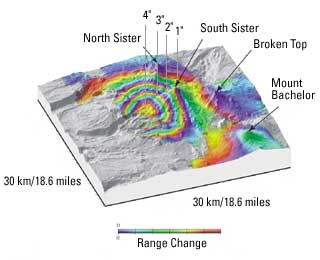 Satellite photos taken in 1996 and 2000 reveal a small upwelling stretching over 10 miles. The upwelling rises four inches at its center. Geologists believe that four miles beneath the upwelling's surface lies an enormous chamber of molten lava.Illustration courtesy of USGS/Charles Wicks