Wireless Power, or, How to Keep Your Light Saber Charged and Ready 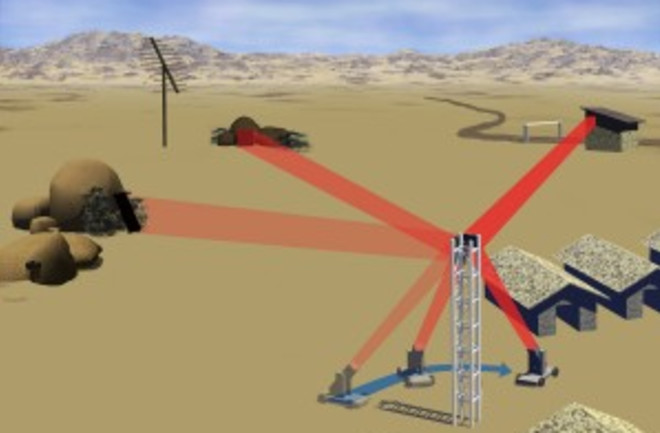 Ever noticed that in the Star Trek universe, no one’s communicator runs out of charge? And Darth Vader never worried about whether he’d remembered to plug in his lightsaber overnight, nor does The Doctor ever dash back into the TARDIS to grab his sonic screwdriver charger. It just never happens. Possibly we’re to understand that these devices have their own tiny power supplies, but more likely these devices have some other way to get their juice. And wouldn’t it be nice to dispense with the problem of recharging once and for all? In our own local space-time continuum, a number of companies labor to make wireless power possible using a host of technologies, but there are two strategies that show a lot of promise, one using lasers, another using magnetic resonance. Laser Motive, a Seattle company, powered a small remote controlled helicopter for 12 hours, 26 minutes by keeping a laser pointed at it, a new record. It marked the second major breakthrough for Laser Motive, the first coming when it won $900,000 in NASA’s Space Elevator Games in 2009. Laser Motive used a laser to power a climber to scoot up a 1 kilometer cable hanging from a helicopter at 3.9 meters per second (8.8 miles per hour). At it’s most basic, Laser Motive is just using light power: On the ground it uses electricity, lenses, and mirrors to create an intense laser, which it fires at solar cells on the unmanned aircraft. The solar cells convert it back to electricity, and away they go. Using lasers allows the possibility of sending power over long distances (though always in line of sight) and for sustained periods. Laser Motive envisions unmanned aircraft going on missions, coming back and recharging from a laser without ever landing, and then returning to missions. A more far-fetched, but actively researched, application is to mount solar panels on satellites in space --- where the sun comes in unadulterated by atmosphere --- and beam the power down to earth. Closer to the consumer market, WiTricity Corp. uses electromagnetic principles to wirelessly beam power from a wall outlet to a device. A device carrying a coil of wire mounted at the outlet will generate a magnetic field. A corresponding device plugs into a laptop or cell phone, also carrying a coil, but attuned to the magnetic resonance from the first device at the wall. At the outlet, electricity courses through coils in a device, producing a resonant magnetic field. The receiving device can pick up the field and electricity will be induced in its coil, and it will then send power into the laptop (or cell phone or light saber). Neither company produces a device ready for market, nor even for mass production; there are still scientific and technological barriers to cross. But as we move beyond wired Internet and wired telephones, electricity has become the last major umbilical cord for our precious devices. I look forward to one day dispensing with them once and for all. Image courtesy Laser Motive