Will These 4 Biofuels Be Bonanzas or Busts? 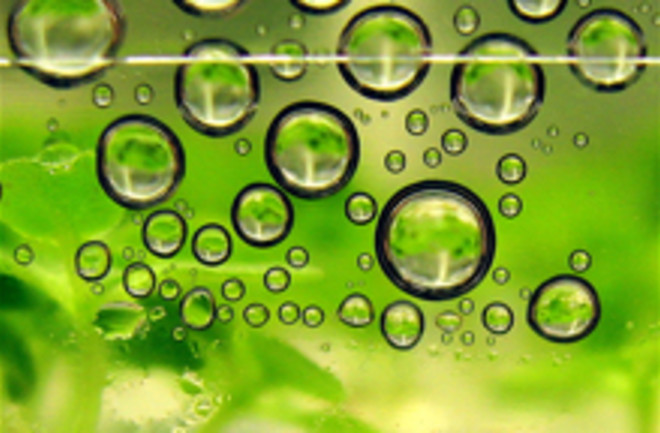 Companies and governments all over the world are racing to find cleaner, greener fuels to end our society's addiction to oil and cut down on the greenhouse gas emissions that cause global warming. But in the rush and tumult of new developments and optimistic predictions, it's hard to separate the hype from real hope. So a recentseriesofarticles from Nature News feels like a public service, as the articles investigate the scientific and economic state of affairs for four different kinds of biofuels. The first article focused on the weedy plant jatropha, which was initially hailed as a biofuel wonder plant because it can survive in poor soil and harsh conditions, and because of its extremely oily seeds. But recently, investments in jatropha projects have fallen off dramatically. Environmental scientist Robert Bailis says that

"over the past three years, the investment got way ahead of the plant science." ... Early investors are now realizing the plant's limitations. Jatropha can live in very dry conditions, but doesn't necessarily yield a lot of seeds. The plant takes three years or more to reach maturity, requiring care along the way. And jatropha seedlings are often not well-suited to the climate in which they are planted [Nature News].

Now, companies are regrouping and going back to basic science; they're crossbreeding plants to create strains that mature faster or have higher oil yields, and are seeking out the habitats most suited for jatropha plantations. The plant may well have a role to play in the future energy mix, but it's no botanical cure-all. Investments in algae-based biofuels, on the other hand, are booming. Corporations like ExxonMobil and Dow Chemical are partnering with biofuel companies on algae projects, and one company, Solazyme, will soon begin producing commercial quantities of algal fuel for the U.S. Navy.

Algae's photosynthetic cells produce an oily goo, including various oils and ethanol, that can be converted into advanced biofuels.... Algae have several key traits that make them a desirable energy source. They can be grown on non-agricultural land in a fraction of the area required by conventional oil crops such as maize (corn), soybean and palm. In addition, algae capture carbon dioxide and can thrive in domestic waste water or salt water [Nature News].

The big hurdle companies now face is scaling up their operations, and finding out whether processes that work in the lab also function on massive, commercial level. Cellulosic ethanol, meanwhile, was expected to already be a dominant part of the biofuel market by now.

Cellulosic ethanol — a biofuel that can be produced from agricultural residue, grasses and municipal waste — was touted as superior to maize (corn) ethanol because it produces fewer greenhouse-gas emissions and does not compete with food-supply needs [Nature News].

But the economic downturn thwarted numerous companies that were just about to build their first processing plants, and investors have been scared off by cheaper oil prices, which makes ethanol less competitive. Companies are now experimenting with ways to bring down the cost of ethanol production, and boosters say that when the economy improves, those plants will finally get built. Finally, Nature News looked at a dark horse in the biofuels race: transforming woodchips and other biomass not into ethanol, but into an exact replica of today's gasoline in a process called "biomass-to-liquid."

Many see promise because, unlike other biofuels, this product would blend smoothly into today's petrol-driven infrastructure.... The technologies required are known but need refinement: they rely on breaking down biomass, such as sugar molecules, which can then be handled in conventional refineries to produce petrol, diesel or jet fuel. But the catalysts needed to convert the biomass to useful hydrocarbons are still being developed [Nature News].

This technology in its infancy, but with oil companies like Chevron sniffing around, it may be one to watch. Related Content: 80beats: Could Exxon Go Green? Oil Giant Invests in Algae Biofuel Research 80beats: Jatropha: Not a Miracle Biofuel Crop After All? 80beats: Forget Biofuel. Is Bioelectricity the Next Big Thing? DISCOVER: Can Botanical Tweaking Turn Jatropha Into a Biofuel Wonder Plant? DISCOVER: The Second Coming of Biofuels DISCOVER: Life After Oil dives into the ethanol debate