Wildfire Smoke Drifts Across 1,000 Miles of the West 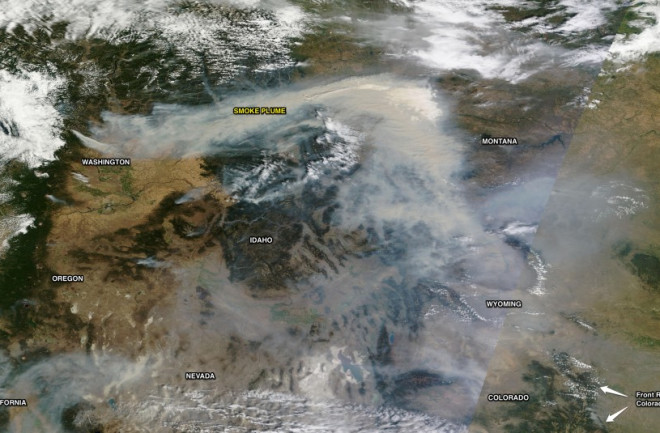 A thick pall of smoke originating from wildfires in Washington and Idaho and covering a broad swath of the Western United States is seen in this image acquired by NASA's Terra satellite on Thursday, Aug. 20, 2015. (Source: NASA Worldview) Strong winds blew through Washington State yesterday (Aug. 19), whipping up wildfires and causing them to run into new territory. Tragically, it appears that those winds caused flames to overtake a U.S. Forest Service vehicle carrying personnel who were battling a blaze in the foothills of the Cascades in north-central Washington. The resulting accident killed three of the firefighters. "It was a hell storm up here,"Okanogan County Sheriff Frank Rogers told Spokane news station KXLY-TV. "The fire was racing and the winds were blowing in every direction and then it would shift. ... It was tough on 'em up here."

SEE MORE: The West's Wildfire Surge—It's Nasty, It Could Set a Record. But Should We Cool the Rhetoric a Little?

Source: NASA Winds also have blown wildfire smoke across a thousand miles of the Western United States. You can see it in the image above, acquired by NASA's Terra satellite today. (For an un-annotated and higher resolution version of the image, click on the thumbnail at right.) I'm feeling it here along the Front Range of Colorado. After a run late this morning, my asthma — normally well controlled — acted up. It's even worse west of where I live. The Colorado Department of Public Health and Environment this morning issued a wildfire smoke health advisory for locations west of the Continental Divide. The advisory had this caution:

If smoke is thick or becomes thick in your neighborhood you may want to remain indoors. This is especially true for those with heart disease, respiratory illnesses, the very young, and the elderly.

We've had smoky haze along the Front Range (marked on the image at the top of this post) for several days now. But today the visibility really took a dive:

The sky along Colorado's Front Range was hazy on Thursday, Aug. 20, 2015, thanks to wildfires burning 1,000 miles away. (©Tom Yulsman) The image above is a mosaic of two photographs I shot north of Boulder, Colorado, late in the day. With some exceptions, our skies usually do not look like those of Los Angeles... As of today, there are 76 active large fires (not counting individual blazes within fire complexes) burning on 1,347,332 acres. That's up more than 86,000 acres from yesterday's report from the National Interagency Fire Center.