Sizzling temperatures combined with dry fuels and forecast high winds are posing an extreme threat to life and property in some areas. 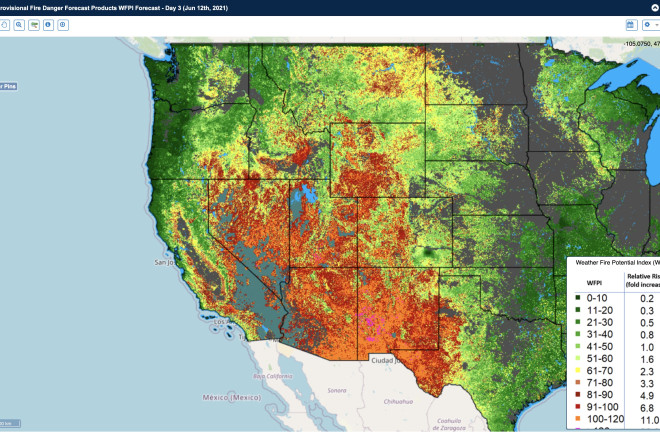 This map shows the potential for ignition of large wildfires on Tuesday, June 15, 2021. The color coded index is based on several factors, including the amount of dry and dead fuels, and forecast wind speeds, temperatures, and rainfall. The orange areas in this map are forecast to have more than a 10-fold increased risk in large wildfire potential. (Source: USGS)

A perfect storm of several unusual factors is bringing dangerous and potentially record-breaking heat to the western and north-central United States.

Temperatures across this sprawling swath of territory are forecast to be 15 to 30 degrees above average this week, thanks to an anomalously strong ridge of high atmospheric pressure coinciding with the high angle of the Sun in June and extremely dry soils.

The already parched Southwest and portions of the Intermountain West will be particularly hard hit. "Places such as Las Vegas, NV and Phoenix, AZ will experience  temperatures into the 110s nearly every day [this] week," according to NOAA's Weather Prediction Center.

To the north, Salt Lake City already reached 100 degrees on Sunday, June 13th, and high temps in the triple digits are expected to continue through Friday. That would be a record  for June.

As of Saturday, June 12th, the National Weather Service had issued excessive heat warnings for areas with a total popluation of 12.8 million people. The number of people affected is likely to soar in coming days.

With about eighty percent of the western United States in drought, and especially dire conditions gripping the Southwest and California, the building heat wave is raising risks for yet more wildfires. In some areas, the heat combined with dry fuels and forecast high winds are posing an extreme threat to life and property from fires already burning and ones that could ignite in coming days.

Fires currently burning in nine western states have already consumed 263,780 acres, an area equivalent to about three quarters of the size of New York City.

The satellite image above, acquired on June 8th and stretching across about 50 milles, shows two of them burning not far from Phoenix: the Telegraph Fire on the left and the Mescal Fire on the right. Seen here in the infrared portion of the electromagnetic spectrum, burned areas appear in red tones. (For a larger, high-resolution version of the image, go here.)

A firefighter monitors flames that were deliberately set on June 6, 2021 in an effort to contain Arizona's Telegraph Fire about 50 miles southeast of Phoenix. Firefighters use controlled burning to consume enough fuel to slow or even stop a wildfire. As of June 13, the Telegraph Fire had consumed 87,119 acres. (Credit: InciWeb)

As I'm writing this on Sunday, June 13th, firefighters have thankfully managed to bring both blazes to greater than 75 percent containment. But others in the Southwest are barely contained and could experience explosive growth in coming days.

Among them is Utah's Pack Creek Fire near Moab, which has consumed more than 5,000 acres — nearly a third of the size of the island of Manhattan — and is only 6 percent contained.

The video loop above shows the view acquired by the GOES-16 weather satellite as the fire intesified on June 11, 2021. The blaze began with an unattended campfire.

Almost all of Utah is experiencing severe drought. Nearly two thirds of the state is in exceptional drought — the most dire of the U.S. Drought Monitor's categories. Utah is hardest hit, but Arizona, Nevada, California and New Mexico are not far behind.

All told, more than 58 million people live in currently drought-stricken areas in the West. A week of extreme heat is likely to make things considerably worse.

Last year brought 58,950 blazes across 10,122,336 acres in the United States, making it the second worst year for wildfire in official records dating back to 1983. With NOAA's Climate Prediction Center forecasting warmer than normal temperatures and continuing drought in the West through August, this year could rival that grim tally.

Whether it does it or not, there is little doubt among scientists than human-caused warming is playing a major role in the long-term drying — or "aridification" — of a large portion of the West. By some estimates, while about half of the multi-decadal drought that has gripped the Colorado River Basin may be due to changes in precipitation, another half can be attributed to higher temperatures that have conspired to reduce the amount of water running off into the region's streams and rivers.