Drought and Overuse of Water Push the Western U.S. Across a Scary Threshold

The Colorado River Basin — which supplies 40 million people in seven states and Mexico with water — is heading into the summer in very bad shape. 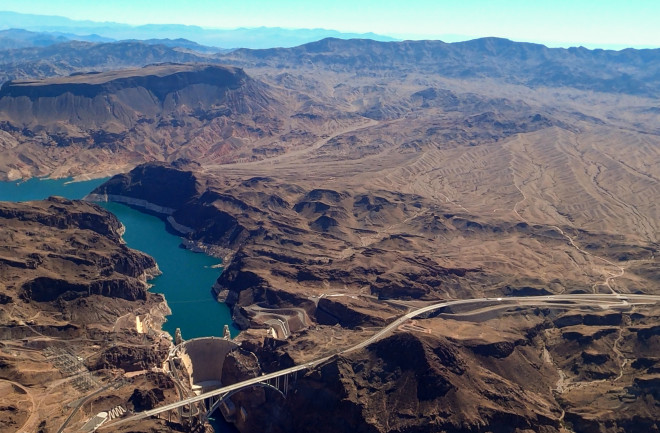 Hoover Dam and Lake Mead — the second largest reservoir in the United States — is seen in this aerial photograph taken on Aug. 26, 2020. Note the white "bathtub ring" left behind by the dropping level of the lake. (Credit: Waterdesk.org and LightHawk)

With the worst drought in recorded history continuing in the Colorado River Basin, Mead's level fell below an elevation of 1,075 feet above sea level.

That number may sound arbitrary, but here's why it's a big deal: If as expected, projections in August do not show the reservoir rising back above the threshold, the first-ever shortage in the basin would be declared by the federal government. And as a result, Arizona, Nevada and Mexico would likely see substantial reductions in their deliveries of Colorado River water.

Arizona would take the biggest cut, totalling 512,000 acre-feet. That's about one fifth of it's entitlement of Colorado River water, and enough to supply more than a million families for a year.

But taps in cities like Phoenix wouldn't actually run dry. Instead, many Arizona farmers would take a big hit. The flow of Colorado River water through the Central Arizona Project canal for use in irrigating crops would be reduced by a third.

Why You Should Care

Even if you don't live in this region, you could feel economic impacts as climate change makes the problem worse in coming years. Water flowing through the Colorado River Basin supplies 40 million people in seven states and Mexico — and it supports an economy that would be the fifth largest in the world if the region were a separate nation.

One of the images in the animation was acquired in April of 1984, the other in April of 2021. Las Vegas is to the left, and Lake Mead to the right.

As the animation flips back and forth from image to image, the shrinking of Lake Mead is painfully evident. In fact, since the year 2000 it has dropped by more than 130 feet. At the same, the animation shows explosive growth of the Las Vegas metropolitan area. Since 1984, the population has grown from 530,000 to nearly 2.8 million people. The City of Las Vegas proper was ranked second fastest-growing city during 2020.

The Las Vegas region gets 90 percent of its water from Lake Mead. But even though the animation symbolizes the unsustainable use of water in the West, it would be an oversimplification to say that growth of the city is responsible for the draining of Lake Mead. Thanks largely to water conservation measures adopted in 2003, Las Vegas actually used 35 billion gallons less water in 2019 than in 2002, even as the population increased by 730,000 people, according to the Las Vegas Water District.

More broadly, consumption of water flowing through the Colorado River Basin as a whole, peaked at about 16 million acre-feet in 2002. (One acre-foot is 325,851 gallons, enough to supply two to three families for a year.) But since then it has come down somewhat, to between 14 million and 15.5 MAF each year. That's largely due to conservation measures in the Lower Basin, which includes Nevada, California and Arizona.

While a significant achievement, it hasn't been nearly enough.

Consumption and losses of water in the Colorado River Basin overall have exceeded the natural flow by an average of about 1.2 million acre-feet a year since 2000, according to Brad Udall, Senior Water and Climate Research Scientist at Colorado State University.

The situation is "a ticking time bomb," he says.

With each "tick," Mead's level has dropped yet lower, declining last week to below 1,075 feet — and showing no sign of stopping. While the "bomb" isn't about to go off just yet, it will eventually unless users agree on a plan for living within the river's declining means.

To get a feel for the magnitude of the decline, it's helpful to compare flows in the river during recent times to a wetter period in the past: between 1906 and 1930. During that "pluvial" period, as scientists call it, an estimated 17.7 million acre-feet of water naturally flowed in the Colorado River past Lees Ferry in Arizona each year. (Lees Ferry marks the administrative dividing line between the river's upper and lower basins.)

Not all of the drought since the early 2000s has been the result of reduced precipitation. According to Udall, about a third to half of it can be attributed to human-caused warming.

As mountain snows melt in the spring, and summer warmth begins drying things out, the increasing temperatures have worked in various ways to reduce the amount of water running off into the basin's streams and rivers. "Rising temperature can actually cause droughts," Udall notes.

So when looking to assign blame, we shouldn't just turn our heads skyward and shake our fists at the clouds (or the lack thereof). We should point to ourselves.

Of course that also means it's within our power to solve the problem.