Why India Experiences a High Rate of Lightning Deaths

In India, around 2,000 people are killed by lightning annually, but international efforts to reduce the toll may be paying off. 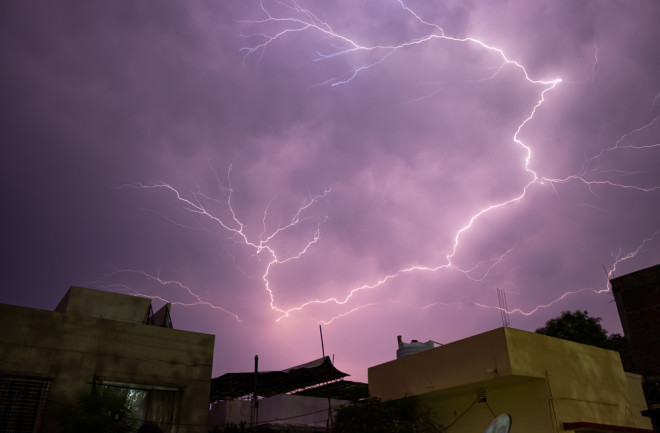 On July 11, 23 people were killed (and many more injured) when lightning struck a tower at a popular tourist attraction in Rajasthan, India. Meanwhile, in nearby Uttar Pradesh, another 42 people (mostly agricultural workers) died from lightning strikes. This pattern is enough to make you wonder, “What’s going on with the lightning in India?”

According to a report by the Indian government, 1,697 people died from lightning strikes between 2020 and 2021. But it’s important to note this phenomenon isn’t unique: Though these incidents are often in the news, India may not hold the record — at least not when you adjust for population. Malawi and Swaziland rank pretty high, too, according to a 2016 report by Vaisala, a Finnish company that provides meteorological services to the public and private sectors.

Overall, it’s difficult to determine which country experiences the highest proportion of lightning deaths. “It’s particularly challenging to get official numbers for every country of the world. In the United States, lightning deaths are tracked extremely well,” explains Chris Vagasky, a meteorologist with Vaisala and member of the National Lightning Safety Council (NLSC). “But in less developed or more rural countries, we often don’t hear about individual deaths, only the really big events, like the one at the [Indian] tourist site last month.”

We do know that lightning occurs more commonly in warmer climates. The major hotspots are Central Africa, tropical South America, South and Southeast Asia, and the southeastern United States. With lots of warm, moist air lifting into the upper atmosphere — where temperatures are colder — clouds and subsequently lightning can easily form, Vagasky says. And weather conditions during India’s monsoon season, when the Rajasthan incident occurred, create the perfect recipe for horror shows in the sky.

But why do lightning strikes kill significant numbers of people? In any country, lightning deaths are higher among those who spend long hours outside, such as employees in agriculture and construction fields. And the infrastructure within developing and predominantly rural nations exposes more people to lightning.

In the United States, where people typically spend around 90 percent of their time indoors, most lightning deaths occur among people who are fishing or at the beach. People often wait until it starts raining to take shelter, Vagasky adds. That's a potentially deadly mistake — if you can hear thunder, you're at risk.

Even so, lightning deaths in the United States are low. In 2020, only 17 deaths have resulted from lightning strikes. And so far, only six people have been killed by lightning this year. The U.S. rate hasn’t always been so low, though. In the early 20th century up to around World War II, 400 to 500 people were killed by lightning each year, Vagasky says. The number decreased dramatically as more people began working indoors. Improved weather forecasting helped, too.

But even as late as the 1990s, dozens of people in the US were killed by lightning annually. What brought that statistic down was a massive education campaign by the National Lightning Safety Council.  The effort popularized slogans like, “When thunder roars, go indoors,” and for the deaf and hard of hearing community, “See a flash, dash inside.” The council has also provided education on other ways to stay safe. All in all, the National Lightning Safety Council has helped reduce US lightning deaths to fewer than 25 per year, on average.

Shrinking that figure will likely be harder in countries with higher numbers of people who work outdoors. Still, fewer deaths from lightning strikes are certainly possible. The NLSC works with governments and other interested parties in several countries, including India, to increase awareness about lightning safety.

In August, Jitendra Singh, the Union Minister of State in India, recommended to the Indian Parliament a product called Damini, a mobile app that tracks lightning strikes. It uses GPS to alert people when lightning has been detected nearby. In the U.S., such apps are common and typically run by private companies, such as the Weather Channel or local television weather stations.

Not all solutions are high-tech, though. Some are as simple — and inexpensive — as parking school buses in agricultural fields, a practice that could save lives by giving farm workers a safe spot to ride out during storms, says Vagasky.

Like other climate-related risks, the problem is only getting worse: Lightning strikes are increasing worldwide, and a 12 percent jump in lightning activity likely accompanies every 1 degree celsius of the Earth’s warming.

However, international awareness efforts could still keep fatalities low. Education is partly why the 1,697 deaths reported by India over the past year — while a tragically high number — actually represent a 60 percent drop from the previous two years, the Indian government report said. In 2022, India hopes to experience fewer than 1,200 lighting deaths.

How Citizen Scientists Uncovered the Strange Behavior of ‘Vampire’ Butterflies

Poop-Derived Fruits Are Known to Grow in Sewage Plants