When an asteroid gets too close 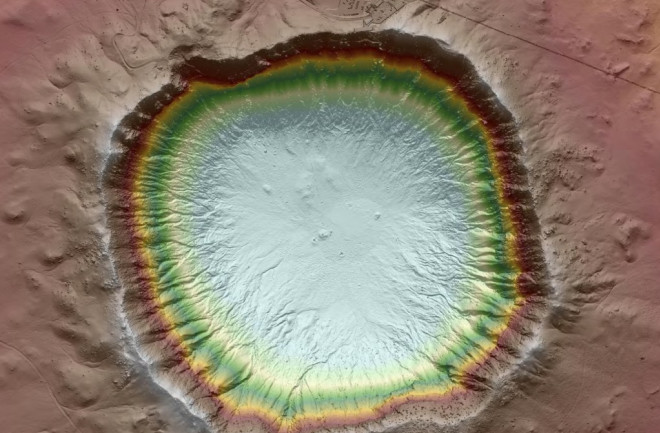 This image of Meteor Crater, AZ was created using an airborne laser instrument called LiDar. (Click on the picture for a bigger, more detailed version.) The bands of color show different elevations above sea level. An impacting meteor about the size of the asteroid that created this crater will whiz very close to Earth tomorrow. (Image: courtesy Barrett Salisbury, Arizona State University) By now, you've probably heard about the asteroid that will zip by the Earth tomorrow. It goes by the unglamorous name of "Asteroid 2012 DA14," and it is projected to pass within 17,200 miles of the home planet. On the cosmic scale, it's missing us by a whisker. At half a football field in diameter, Asteroid 2012 DA14 is about the same size as the meteorite that gouged out Arizona's famous Meteor Crater, pictured at the top of this post. Fifty thousand years ago, that meteorite slammed into a part of Arizona that was then a mix of grassland and woods inhabited by wooly mammoths. Today, Meteor Crater is a dramatic hole in the desert about three quarters of a mile across. (To get a sense of scale, look closely at the very top of the picture, where you'll find a lot with parked cars.) Research published in 2005 suggests that the meteorite may have broken up as it hurtled through the atmosphere, forming a pancake-shaped cloud of nickel-iron fragments. It was this cloud of debris that slammed into the ground at about 27,000 miles per hour. Today, the resulting crater ranges from 5,055 feet above sea level at the very bottom to 6020 feet at the high point along the rim. To create the image, an airborne instrument aimed laser light at the surface and analyzed the scattered photons coming back. Barrett Salisbury, a researcher at Arizona State University, used the data to produce this detailed and compelling image. The bands of color correspond to different elevations. To see more cool images like this, check out Salisbury's web site. And here's another unusual view of the crater:

Image: NASA Produced using data from the ASTER instrument on the Terra satellite, it was originally published on NASA's Earth Observatory site.